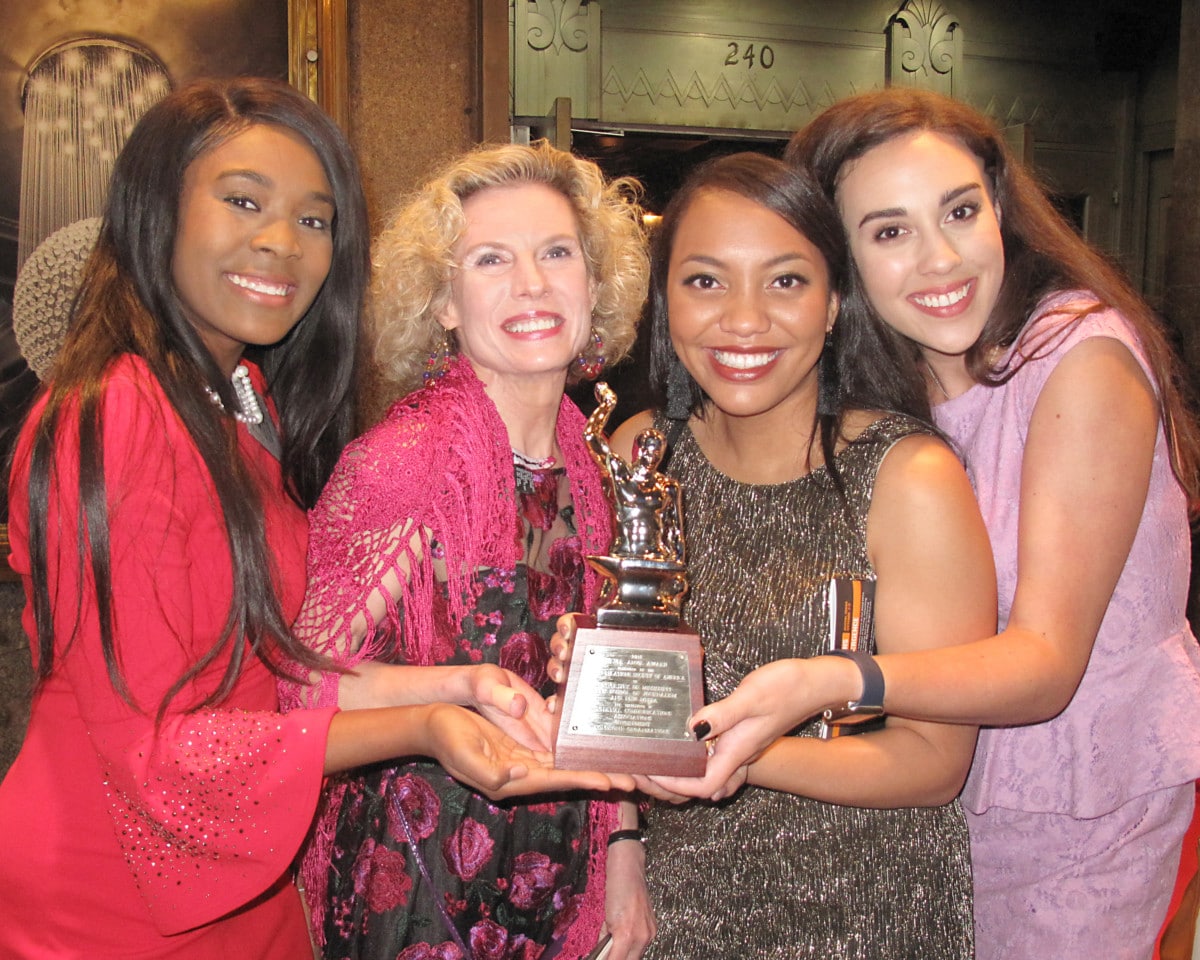 Ole Miss students from the Meek School of Journalism and New Media have won the most prestigious award in public relations.

Robin Street along with her 30-member student team have won a Silver Anvil, for “It Starts with (Me)ek,“ a public relations campaign they created asking students to “just pause” before stereotyping others.

The award, given by the Public Relations Society of America, is considered to be the “Oscar” of the public relations industry.

Actress and “CBS Sunday Morning” show contributor Nancy Giles, best known for her role on the TV show “China Beach,” served as emcee for the event in New York and presented the award to senior lecturer Robin Street, campaign chair.

Three of the 30 students who served on the It Starts with (Me)ek committee joined Street at the ceremony. The journalism school graduates attending the event in New York were Brittanee Wallace,  an integrated marketing communications major from Gulfport, Bianca Abney, an integrated marketing communications major from Moss Point, and Grace Miller, a broadcast journalism major with a specialization in public relations from Gainesville, Georgia.

The weeklong “It Starts with (Me)ek” campaign consisted of 50 events, speakers and activities, all based on the message to “just pause” before judging people based solely on one factor, such as their race, gender, religion, sexual orientation, disability, mental illness or another factor.

While judges remained anonymous, one said the “It Starts with (Me)ek” campaign was a “very brilliantly executed and impactful campaign. Well done!”

Street said winning the Silver Anvil and attending the ceremony with three of the students who worked on the campaign was “so exciting.”

“We were surrounded there by some of the biggest names in public relations and corporations in the country,” Street said. “The fact that a student team won competing with those professionals is truly a testament to the education our students received from all their Meek School instructors. It is also especially meaningful because it was for a public relations campaign with a very simple message: Just pause before stereotyping others based only on their race, religion, sexual orientation, disability or another factor.”

Like the Oscars, Silver Anvils are given in multiple categories. “It Starts with (Me)ek” won in the internal communications category for a government or nonprofit organization. Only one Silver Anvil is awarded in each category, while other entries may be given an Award of Excellence.

“We hoped that the campaign would encourage our students to treat others with understanding, dignity, respect, and inclusion, and based on our follow-up surveys and focus groups, we believe we succeeded,” Street said.

A previous campaign Street did with 15 Ole Miss students won a Silver Anvil Award of Excellence in 2009.