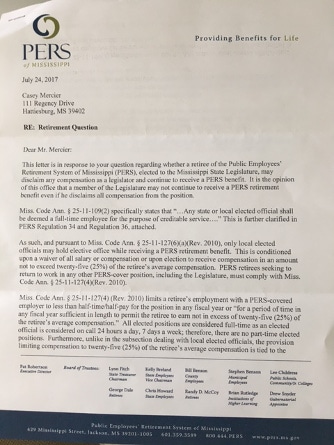 PERS, it’s the Public Employee’s Retirement System and they provide nonfederal public employees of the state with defined benefits after retirement.

“It’s a lot like a social security, in that your employer pays a match to what is taken out of your check,” said Robertson.

However, some people are looking to keep their retirement benefits and go back to work.

Casey Mercier is running for State Representative in Mississippi’s 102nd House District and he said the state’s laws are designed to deter retired educators from serving in the legislature.

Mercier reached out to Robertson to find out what would happen to his PERS benefits if he decided to run for office.

Robertson replied saying Mercier would have to give up his benefits as a retiree if he were to take on a full-time position as a Mississippi State Representative.

“If they come out of retirement, they are going to add additional years of service,” said Robertson. “They are going to increase their PERS benefits, as well as, earn other benefits.

However, some are looking to make a change.

Mercier said that if he is elected he will look to change the law.

“I will fight to change this law and any others that are designed to keep the ‘same old, same old, special interest groups’ holding the power in our state legislature,” said Mercier. “I am willing to give up my retirement benefits from the state in order to represent my district’s citizens in Jackson. These outdated laws have failed to provide for a superior public education system, provide proper care for our elderly, and stop wasteful spending in the state.”

Mercier added saying that there are 40,000 retired educators in the state of Mississippi and not a single one serves in the legislature.

“If a state retiree chooses to run for the legislature they are forced to give up their retirement benefits when they are elected,” said Mercier. “The laws and policies of Mississippi prevent retirees in the fields of education, state law enforcement, public safety, human services, and more, from serving in the Mississippi legislature.”

Robertson said changing the law would be complicated.

“What happens is, if you change the rules so that somebody can retire when they are first eligible, and work full time at the same time, you change the pattern of retirement,” said Robertson. “So, it has a negative effect on the retirement plan because people are retiring earlier and you are paying benefits longer.”