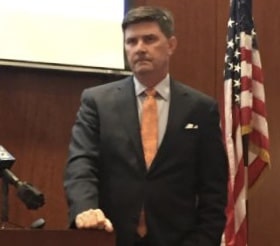 Today, State Auditor Stacey Pickering and the Performance Audit Division of the Mississippi Office of the State Auditor (OSA) issued the largest ever demand issued by OSA against Stion Corporation in the amount of $92,943,780.86.

Stion Corporation, which manufactured solar panels, operated under multiple business names during its business with Mississippi Development Authority (MDA) and originally signed a memorandum of understanding (MOU) with MDA in 2011. One of the business names appearing on MDA-approved loan documents included a business that was not registered with the Mississippi Secretary of State. Due to this fact, they should not have been authorized to conduct business within the State of Mississippi.

After multiple amendments to the loan agreement, in October 2013, MDA agreed to allow biannual interest-only payments from Stion until January 2017; at that time, a payment schedule to repay all outstanding amounts of the loan by the end of December 2025. Stion Corporation did not pay the final interest-only payment (December 2016) and did not begin regular payments in January 2017. Therefore, OSA finds that Stion has defaulted on the loan received from MDA.

On October 13, 2017, Stion Corporation announced to MDA and the Area Development Partnership in Hattiesburg that it was closing its Hattiesburg facility. This closure leaves 137 Mississippians without jobs and is another failed “Green Project” in Mississippi in which millions of taxpayer dollars have been lost.

State Auditor Stacey Pickering said, “Stion is just one more example of a risky investment made by Mississippi in which the company and its management did not keep their commitments. Today is the first step to begin the process of recovering monies on behalf of Mississippi taxpayers.”

Included in the amount of the demand are the original loan principal, interest on the loan, statutory interest charges from OSA, fees owed to Hattiesburg and Forrest County in lieu of taxes, and recovery costs.

Mississippi has lost more than $230 Million in the failed economic development projects listed below since 2010. A detailed report detailing these projects and others is forthcoming from OSA.

“We’ve been monitoring the Stion Corporation for a couple of years now while NDA has been trying to work with them trying to salvage some of the investment that the state of Mississippi made in this start up company,” said Pickering.

He said Stion Corporation at no point has held up their end of the bargain for the commitments they have made to the tax payers of Mississippi.

Pickering added that they take their job very seriously at the auditor’s office, and this is just one more failed green project they’re going to work to hold accountable like they have with KiOr and GreenTech.