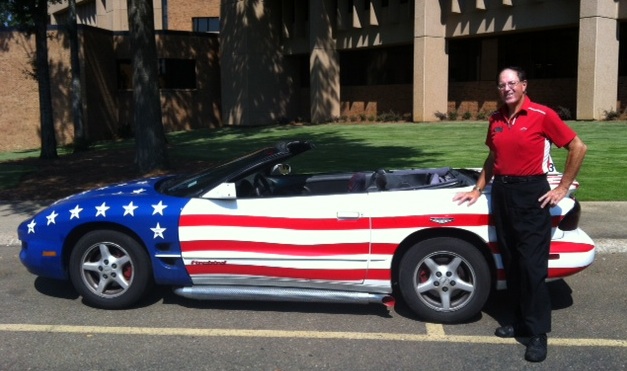 JACKSON, Miss.–If you’ve ever spotted the Firebird Pontiac convertible with the Pizza Hut delivery sign on the back in and around Jackson, you’re not alone.

Ken Smarts has been delivering pizzas for the last five years in his convertible that he custom-painted himself with the complete 50 stars and 13 bars.

“The top is always down,” he laughed when asked if he closes it in winter. “I’ve only had one person ever complain their pizza is cold and I haven’t seen her since.”

Smarts said he’s always driven a funky car even back to his high school days and got the idea to paint his Pontiac in 2003 when he saw a motorcycle with a similar design.

“A lot of people think I’m just crazy for driving this thing,” he said during a ride-along Monday for News Mississippi.

The look on pretty much every other driver during the short ride seemed to be overwhelmingly positive and even had a few honks thrown in while people waved.

“You can’t see them very good now but I have a light up package under the car that I deliver with at night that beats faster as the music gets faster,” he pointed out on the sunny day.

The 2001 Firebird also has a custom horn speaker under the hood with 400 different tunes that he played at will.

“I get customers that will sing the pledge of allegiance,” Smarts said. “I’ll even get kids who salute me.”

He pointed out that he isn’t in the armed forces but much of his family, like his dad and grandfather were all in the service.

Smarts was also recently married, and he said that his wife did indeed know what he drove before she ever agreed to go out with him.