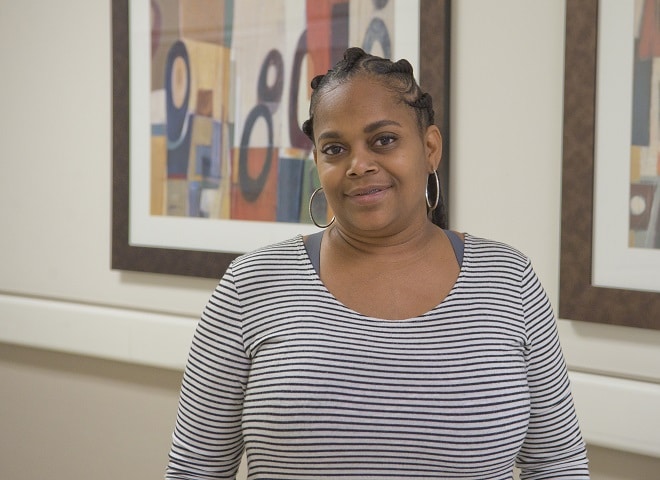 When Nekesha Moore was diagnosed with breast cancer six months ago, the important things in life were front and center even as she dealt with the shock of her disease.

Her two grown children. Her two grandchildren. “They are my world,” said Moore, a Byram resident.

And, she considered her future as a relatively young woman of 44.

“I was feeling very uncomfortable about the fact that I’d be walking around with one breast,” Moore said. “But, they told me that I didn’t have to do that, and I could have reconstructive surgery.”

Moore’s breast care team at the University of Mississippi Medical Center offered her a procedure not often done in the state, one that uses her own tissues instead of an implant to reconstruct her breast.

It’s called DIEP, for deep inferior epigastric artery perforator. Surgeons move fat, skin and blood vessels from the patient’s abdomen to rebuild a breast or breasts that have been removed. Then, using microsurgical techniques, they reattach blood vessels so the tissue will survive.

Because no muscle is moved, most women recover more quickly and have a higher probability of maintaining good abdominal strength, which can be lost through similar procedures that call for removal of not just fat, but surrounding muscle.

Both the cancer surgery and the DIEP procedure are performed during the same operation so that the patient doesn’t have to come back later for reconstruction, or spend weeks preparing for it. Removal of abdominal fat amounts to a tummy tuck – a plus many women like.

Women who choose to have implants might need to see their surgeon every 12 to 18 months, but women undergoing DIEP procedures might go years between visits.

“I could have gotten an implant, but if I had, I would have needed more surgeries,” Moore said.

Moore said her cancer was caught early. “It was a whirlwind,” she said of getting an annual mammogram Dec. 6 followed closely by her right-breast diagnosis on Dec. 9. “They told me all of my options and explained everything. I was a nervous wreck, because I thought I was perfectly healthy until then. I had no pain, no discomfort, and no knots in my breasts.”

Most breast cancer patients “don’t even know that the DIEP procedure is available to them,” McKinney said. “It hasn’t been available in this area before now as an option. As patients get more informed about their various options for reconstruction, this is appealing.”

When women are considering their options for reconstruction, McKinney said, “one of the main issues is trying to make a reconstructed breast feel like a native breast. The best way to do that is to use your own tissue, and using a DIEP flap helps to create a breast more like your own.

“I’m for all patients having multiple options and multiple ways of being whole. Each patient should do what they feel is comfortable for them.”

The DIEP breast reconstruction is not rare, but it’s harder to do than other reconstructions, McIntyre said. Because blood vessels in skin and fat are tiny, they’re harder to reconnect than those in muscle and require microsurgical techniques to reattach. Sparing the muscle means more abdominal strength for the patient down the road.

It’s a surgery for the medically fit, McIntyre and McKinney said. The breast care team carefully evaluates each DIEP candidate. “Patient selection is extremely important. We make sure that we recommend DIEP for patients who will have the best success,” McKinney said.

“Our plastic surgery team does an excellent job of stratifying patients as to risk and minimal complications. We want to make sure that patients can tolerate surgery and don’t have a lot of co-morbidities that would preclude that.”

McKinney first performs the mastectomy, and then McIntyre removes fat, skin and blood vessels from the patient’s abdomen, like a tummy tuck, reshaping it to form a new breast.

“In a tummy tuck, we’d discard all the fat,” McIntyre said. “In this operation, we’re using it to build breasts.”

McIntyre said women who have an aggressive breast cancer and who need radiation therapy sometimes choose to have a mastectomy and reconstruction separately. For women who have both procedures during the same surgery, it’s a long operation – easily eight hours or more, McKinney said.

Few women have problems with recovering following a DIEP procedure, McIntyre said. That’s been the case with Moore.

OHS Day 34: Some Advice That Might Seem a Little Weird(Ryno)