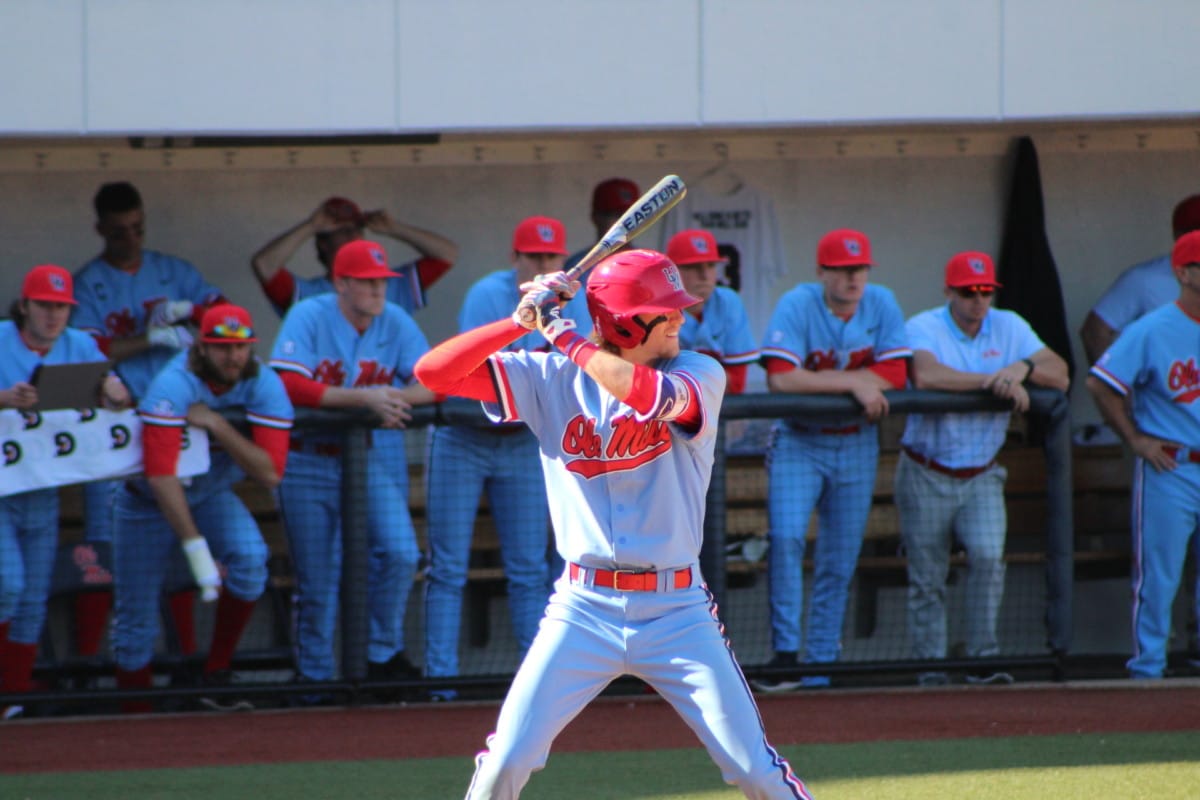 HOOVER — The bottom of the ninth inning of Sunday’s SEC Championship game between Ole Miss and Vanderbilt featured two teams on different wavelengths, battling with different motivations and with dissimilar arsenals and unbalanced consequences.

An Ole Miss team playing its sixth game in as many days was trying to escape a bases-loaded jam. Its pitching staff on fumes, trying to retire the most potent lineup in collegiate baseball to get one more crack at breaking a deadlocked 10-10 game. Vanderbilt is the best team in college baseball and was comfortably a regional host and a national seed. It was simply trying to add another accolade to a 48-win season as dominant as its 5-0 run through this tournament.

Austin Miller had walked the bases loaded after striking out six of the first ten hitters he faced, including the first two batters of the inning. He issued a free pass to leadoff man Austin Martin and pitched delicately to the ever-dangerous J.J. Bleday and his 26 home runs and .357 average. He lost Ethan Paul after getting ahead and was clearly out of bullets to sling.

With limited options available amongst a pitching staff that was throwing its 54th inning, Mike Bianco went to Ryan Olenek — who was playing third base instead of center field after Tyler Keenan exited the game with a battered shoulder. Olenek had closed games before, but had never entered such a high-leverage environment. He offered a first-pitch fastball to Phillip Clarke, who stuck it into right-center field for a game-ending walk-off single to give the Commodores the SEC Title.

“I am so proud of my guys,” head coach Mike Bianco said. “One of the challenges is to go through this gauntlet of a tournament to get to this point. They gave it everything they had and left it all out on the field.”

The Rebels led this game 9-1 at after two-and-a-half innings after they tagged Vanderbilt starter Patrick Raby for six runs, two earned, In the opening inning and three more off his successor Zach King. It would’ve been foolish to believe the Rebels were going to cruise to a win and a lock up a potential hosting bid after jumping that far in front early. Vanderbilt leads the SEC in batting average, slugging, on-base percentage, RBIs, triples and runs scored. It is the most powerful offense in the sport and it crawled back into the game off a depleted Ole Miss pitching staff.

Zack Phillips started on three days rest and exited after giving up three hits to begin the third inning. He was charged for three earned runs. The Commodores plated five runs off his successor, Tyler Myers’ in the fourth inning and shaved the deficit to 9-8 when Pat DeMarco clubbed a three-run home run over the left field wall. Seldom-used Jordan Fowler relieved Myers following the blast. Fowler recorded two outs and Ole Miss tried to thwart the Vanderbilt charge by going to ace Will Ethridge on four days rest.

“Coming back on short rest, his arm looked pretty live,” said catcher Cooper Johnson, who had three hits in this game. “He pitched really well for being on short rest.”

Ethridge mustered 1.2 innings of relief, allowing just one unearned run that tied the baseball game at 10. He retired the first two batters of the sixth inning and would’ve retired a third for the first zero placed on the scoreboard from the Ole Miss pitching staff since the first, but Jacob Adams mishandled a ground ball that allowed Stephen Scott to reach. Harrison Ray doubled him home five pitches later on a ball that appeared to be foul upon replay. Ole Miss elected not to challenge the play.

Ole Miss met its match in the form of Commodore closer Tyler Brown, who entered the game in the seventh inning. Brown threw three scoreless innings of two-hit ball, pumping 96 mph fastballs at the Rebels.

“I think that is baseball,” Thomas Dillard said. “You have to expect a team like that is going to come back at you. We have a lot of confidence in our pitching staff. We fought as hard as we could today. A lot of it is on the hitters for not continuing to add onto what we had.
We may have gotten complacent a little bit there.”

As the offense faded, Miller tried to keep the Rebels in the game as long as it could and his effort was commendable, but Vanderbilt finally cracked him in the ninth inning.

“He tunnels his fastball and his curveball so well, it was all just clicking,” Johnson said. “The command of his fastball was really good today and it just made the curveball better. They could not pick it up.”

Dillard and Parker Caracci were named to the All-Tournament team.