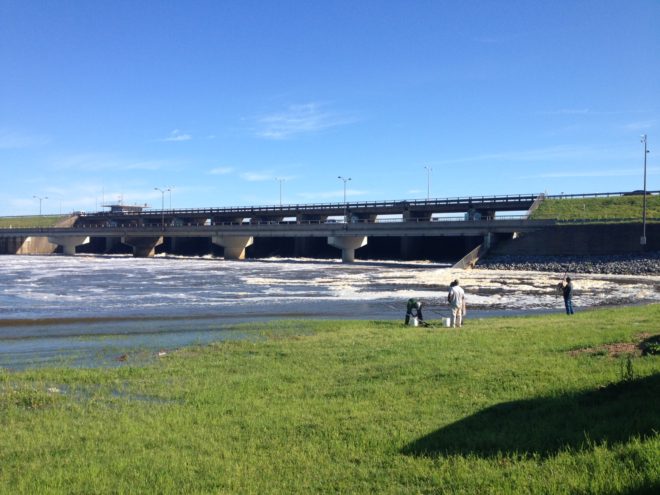 A rapid and intense rain event overnight on Sunday forced Barnett Reservoir officials to increase the water flow at the dam to lessen the impact of flooding downstream this week, the Pearl River Valley Water Supply District announced on Monday.

After a 10 a.m. conference call with the National Weather Service Jackson, the Lower Mississippi River Forecast Center in Slidell, the U.S. Army Corps of Engineers in Vicksburg and the City of Jackson, PRVWSD announced a plan to increase the release to 25,000 cubic feet per second at noon Monday with a plan to reach 33,000 cfs by noon on Tuesday.

“Our plan is to stay ahead of the curve of the predicted inflow into the reservoir, which will lessen the eventual impact downstream,” said John Sigman, PRVWSD General Manager. “Another conference call is scheduled for Tuesday morning. By then we will have a better picture of what is coming and we will adjust our plan accordingly.”

The National Weather Service has predicted a crest of 32.5 feet on the Pearl River in Jackson at noon on Wednesday (April 5). At that level, only minor street flooding is expected.

Reservoir officials closed access to the Madison County side of the spillway at 11 a.m. on Monday, and it will remain closed until further notice.

The Lower Mississippi River Forecast Center predicted a peak inflow of 37,500 feet into Barnett Reservoir at noon on Wednesday. The quick, heavy rain event saw the reservoir level jump from 297.0 feet above mean sea level to 298.3 feet in a matter of a few hours.

River levels can be tracked online at these websites: