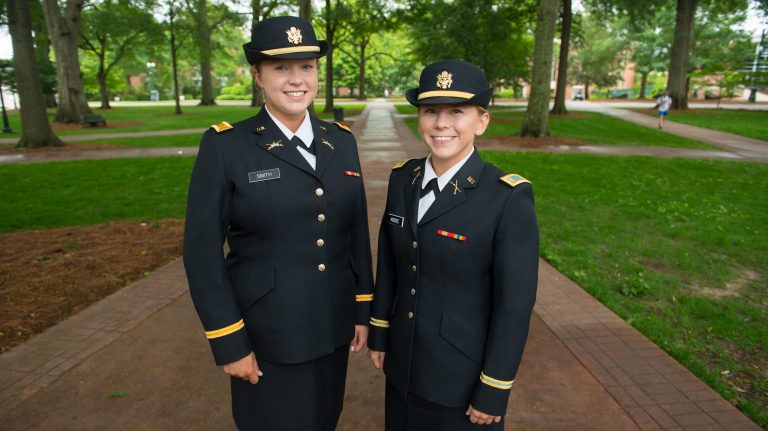 Katie Smith (left) and Lakoda Kissee recently became the first female University of Mississippi Army ROTC graduates to be commissioned into combat roles for the Mississippi Army National Guard. Smith will begin her training to serve as an armor officer in January, while Kissee is undergoing training to serve as an infantry officer. Photo by Kevin Bain/Ole Miss Digital Imaging Services

As more than 5,500 University of Mississippi graduates celebrated Commencement with family and friends on May 11th, two members of the Ole Miss Army ROTC celebrated making school history.

“Kissee and Smith are giving the MSARNG the opportunity to accept two outstanding women as combat arms officers, and they are giving the University of Mississippi Army ROTC program the opportunity to commission the university’s first female infantry and armor officers as well,” Sgt. 1st Class Anthony Douglas said. “But of more significance, they both now have the responsibility to show that this is not a change to be afraid of – whether that’s the Army changing its policy to allow women in these jobs, or showing other young women that they can perform these jobs if they want. To me, that’s the greatest significance, is that they have the opportunity to dissuade the fear while encouraging others.”

But Kissee and Smith did not view themselves as groundbreakers as they were going through the rigors of the university’s ROTC program. They merely wanted to pursue careers that involved serving others.

“I decided I wanted to join the military my senior year of high school,” said Kissee, who is attending Infantry Basic Officer Leader Course at Fort Benning, Georgia. “I wanted to serve my country and be part of something greater. Being commissioned as an infantry officer is an honor and a great responsibility.”

Smith joined Army ROTC after her freshman year at Ole Miss when she began longing for competition and a team atmosphere that she was missing after playing sports her whole life.

“I think I was kind of lost not playing sports,” said Smith, a criminal justice major. “I needed something I was really, really passionate about and I decided to give (ROTC) a chance, and you cannot stick with it unless you absolutely love it.

“It was just so challenging, and it was nice to be competitive again, to have a challenge.”

Both Kissee, who plans to be an infantry officer, and Smith, who will work as an armor officer, attended Ole Miss during a time of change for the roles of women in the military. They both remained steadfast in their desire to serve in combat roles if those opportunities were to open.

When the Army opened up combat opportunities for women, both Kissee and Smith expressed interest in those roles, Douglas said.

“It’s really nice to see that progression and how things have changed just within the time I’ve been in school,” Smith said.

All cadets face physical, mental and emotional challenges unique to military-oriented students, and Kissee and Smith both said they took pride in being able to meet those demands.

“The ROTC program was phenomenal,” Kissee said. “The cadre instilled leadership and discipline while encouraging us to become the best version of ourselves. The program attracted many great personalities, and it was an honor to train alongside my peers.”

Smith has already served in leadership positions within Army ROTC, and she said that experience has opened her eyes to the roles she will be moving into as her career continues.

“It’s really nice having people come to me with questions about the ROTC program,” she said. “It’s nice that people see me as a person that they want to ask questions and to kind of represent the program.

“All I ever wanted was to be taken seriously and to be competitive with everybody else, so it feels nice to kind of be at that point.”

Both newly commissioned officers will continue their training over the next few months before being assigned to positions within their respective units. Smith will serve on staff as a Gold Bar Recruiter for Ole Miss Army ROTC this summer before reporting to training in January.

As they get set to leave the university, both officers say they hope they have left a mark on cadets coming through the ranks behind them.

“I see some of the younger cadets, female cadets, and it’s a good feeling knowing that we have already done this and they can see that it can be done at Ole Miss ROTC,” Smith said. “It just gives them hope that you can really do anything that you want to.”

Kissee, who completed her degree in December, said she hopes to see more female cadets go into combat roles if that is their desired path, but she advised that it takes a special person to make it through the program successfully.

“I would advise younger cadets to learn the difference between work and play, and then integrate those concepts into their lives,” said Kissee, who earned her degree in criminal justice with minors in military science and leadership studies and Russian. “The military has a lot of room for fun, but it is a professional organization and it is imperative that cadets understand how to maintain themselves around others.”

Kissee plans to attend Army Ranger School at Fort Benning and eventually hopes to return to school to study nursing.

Douglas said he knows great things await two of his most recent graduates.

“I’m grateful for the time I’ve had to get to know them and to watch them mature through our program,” he said. “I’m excited to see where their careers take them and I have full faith in the abilities of both of these young soldiers to represent well the university, the ROTC program, and the Mississippi Army National Guard.”