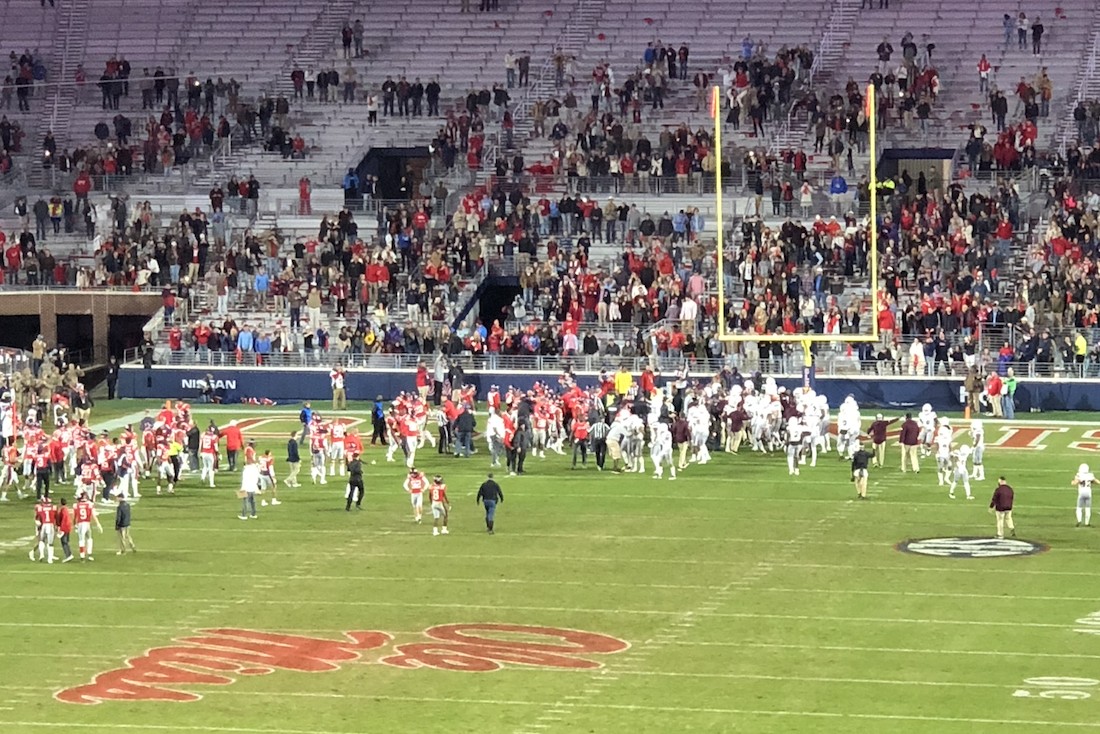 The SEC has issued their first official statements regarding the brawl from Thursday night’s Egg Bowl.

Time was running out in the 3rd quarter when Matt Corral, in for an injured Jordan Ta’amu, found WR A.J. Brown for what looked to be the Rebels’ first TD of the game. After Brown dragged Bulldog defenders into the end zone, he and S Johnathan Abram had words when they got up.

Abram threw a punch and Brown swung back. Before the refs could get a handle on things, the entire bench had cleared for both teams.

Mississippi State and Ole Miss are NOT in the holiday spirit.

“Unsportsmanlike conduct on all players for both teams…” pic.twitter.com/Cf6efueNSu

The dust-up resulted in multiple ejections, and a penalty was assessed to every single player. The TD was eventually overturned after it was determined that the Rebels didn’t get the play off in time.

The hate between the two teams and the two fan bases has only escalated in recent years, and SEC commissioner Greg Sankey has now said that something needs to be done. The commisioner has demanded that Ole Miss AD Ross Bjork and MSU AD John Cohen meet in the offseason to discuss a course of action.

“It remains disappointing to have seen the unnecessary actions during and after the Mississippi State at Ole Miss game on Thursday night. These actions are unacceptable and my concern relates to the bigger issue of the repeated incidents before, during and after games between these football programs,” Sankey said. “These incidents have become too common in this series. I will require both athletics directors to meet with me at the SEC Office in the off-season to review past issues and develop a plan for the purpose of creating a healthier environment for this annual game.”

In addition to Sankey’s comments, the SEC has reviewed the fight and determined that that four players should have been called for flagrant personal foul penalties: Abram & Jamal Peters for MSU and Brown & Corral for Ole Miss.

According to the SEC, two of the players penalized were misidentified and should not have been ejected for flagrant personal fouls: MSU’s Cameron Dantzler of Mississippi State and Ole Miss’ C.J. Moore.

None of the players that were penalized for MSU will be in danger of missing the Bulldogs’ bowl game.

Thunder & Lightning: Can the Egg Bowl Rivalry Ever Change?