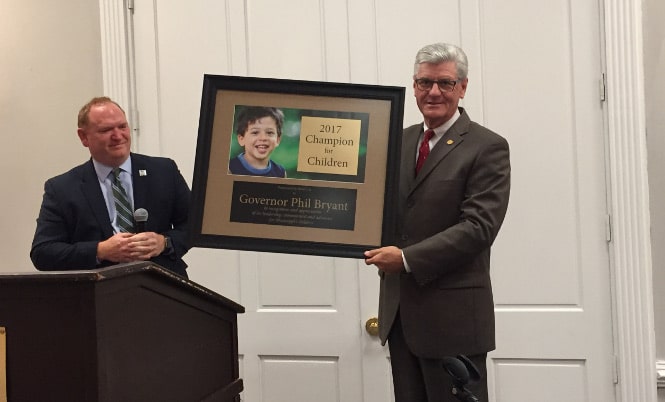 Governor Phil Bryant honored two Mississippi Department of Child Protection Services social workers on Friday for their dedication to a case that led the life of a Madison county child being saved earlier this year.

What Governor Bryant wasn’t expecting, was to be honored himself.

The two social workers, Tausha Rawls and Melody Vaughn, were awarded the first ever Governor’s Award for Outstanding Service in Child Protection and Well-Being.

Rawls and Vaughn worked together on the case of a child who was severely neglected and often locked in a closet by the parents. After complaints were filed, Rawls and Vaughn continued to work the case until fruition–the child was removed and placed into a safer, more nurturing environment.

“Because of you, this child is alive today,” said Governor Bryant. “You truly have made a difference because you did your job.”

The complaints flowed in regarding the treatment of the 10 year-old starting in January 2017 after neighbors in Canton said they were not seeing the child. Rawls, the frontline worker for Madison County, immediately followed up despite the parents’ denial that anything was going on.

“Basically, I caught the mother in a lie,” said Rawls. “Sometimes a report can have incorrect information but in this case I had a name, age, birth date and social security number for the child. The mother was lying. She said ‘she didn’t know about a child like that.’ I knew she was lying so we kept investigating.”

The child was found severely malnourished and locked in a closet. The child and all siblings were removed.

Rawls and Vaughn continued to work together until the parents were charged with felony counts of child abuse and neglect.

“Because of Governor Bryant, Mississippi is leading the way in improving our system of protecting children and strengthening families.” said Dr. David Chandler, Commissioner of the Mississippi Department of Child Protection Services.

Here is a full video of the ceremony honoring Rawls, Vaughn, Governor Bryant, and 14 finalists of the Walter F. Weathers Award for Outstanding Social Work:

Mother in recovery after alleged stabbing by son