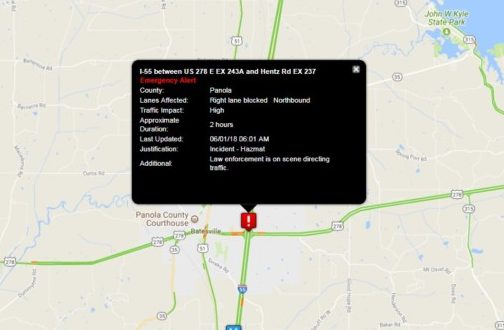 The interstate was shut down in both directions Thursday afternoon when a tanker truck exploded on I-55 near Batesville. The tanker was carrying hazardous materials when it crashed and caught on fire.

Two police officers and a civilian pulled the driver from the truck right before the tanker exploded. The driver received severe burns and both officers burned their arms.  The Batesville Police Department said the driver was airlifted to the Regional Medical Center’s Burn Unit and both officers were taken to the hospital where they remained overnight due to smoke inhalation.

Police also asked people living within a half-mile radius of the crash to evacuate their homes because the truck was carrying sulfur dioxide which can be dangerous if it is ingested or inhaled.

Hazmat on I-59 southbound at MS 26 / Poplarville / Wiggins EX 29 in #PearlRiverCounty has ALL lanes BLOCKED. Overturned tractor trailer has spilled asphalt sealer. Map it > https://t.co/JL6MEyuMHy #MShwys

Residents in the area were able to go back to their homes late Thursday afternoon, but one northbound lane still remains blocked.