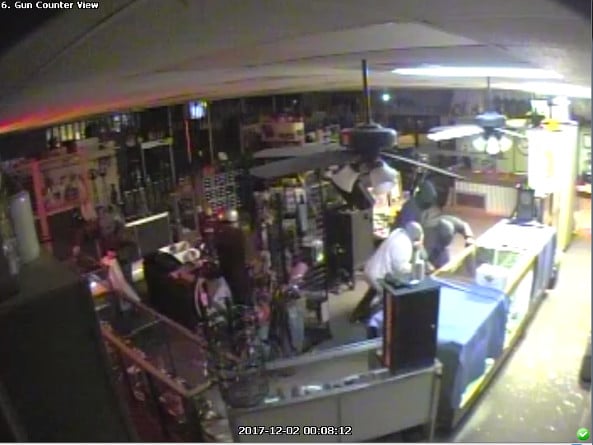 Thieves broke into a Natchez pawn shop and stole anywhere from 25-30 guns as well as some jewelry.

The Adams County Sheriff’s office said that at approximately 7:55 a.m. on Saturday deputies responded to Peddlers Pawnshop in reference to a burglary.

The owner of the pawn shop said when he arrived this morning, he found that someone had broken in and stolen 25 – 30 handguns and various pieces of jewelry.

However, no alarm was called in from the location at any time during the night. Security video shows four hooded and masked suspects come onto the property, shatter the door and enter the building.

Three of the suspects went to the gun counter, broke the glass and removed the guns.

The fourth suspect broke the glass in the jewelry counter and removed some of the contents.

All four suspects then ran from the building.

Police asks that anyone with any information on the identity of these suspects contact the Adams County Sheriff’s Office at 601-442-2752 or they can utilize the tip411 anonymous text tip system.