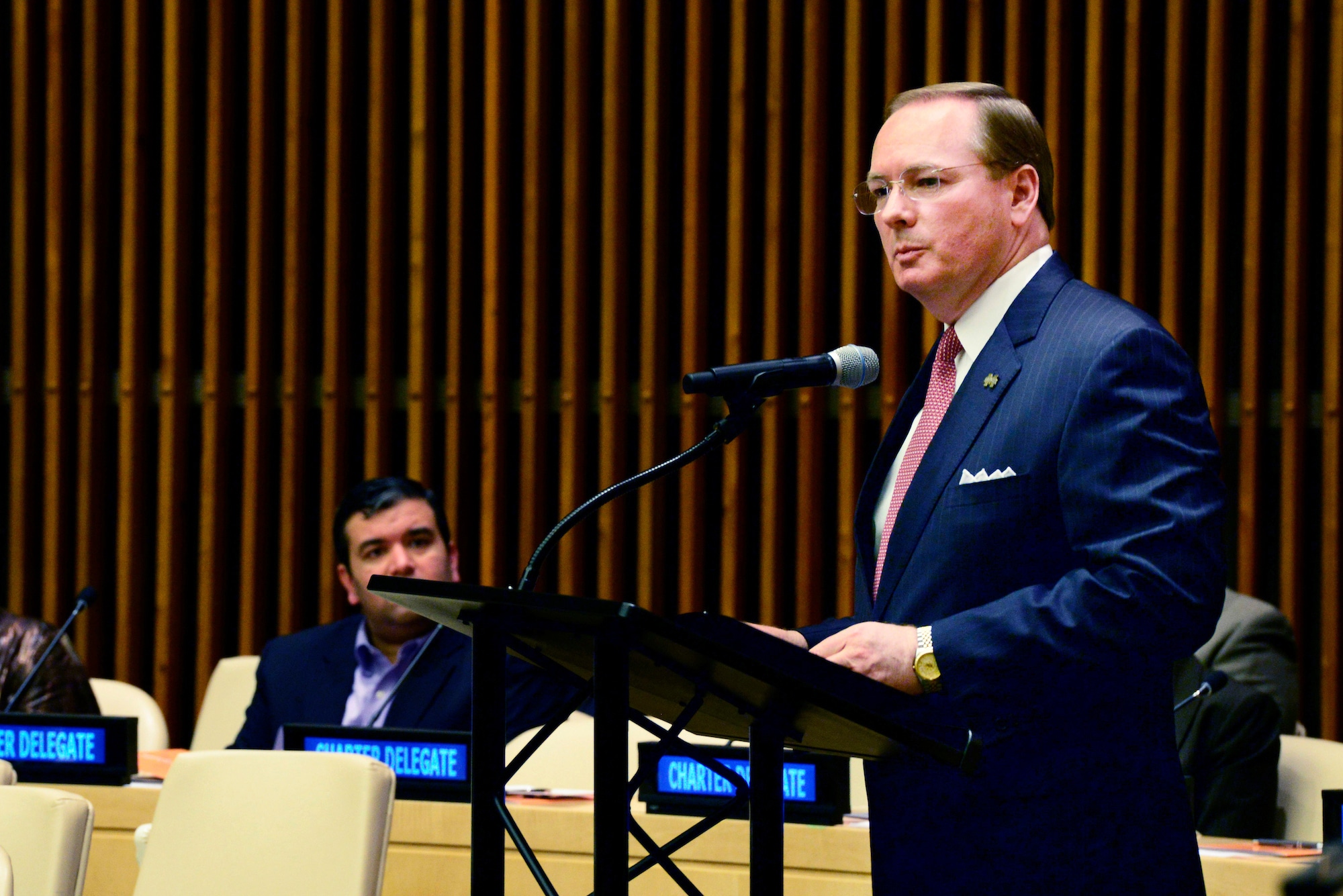 Mississippi State President Mark E. Keenum gave an address at the United Nations in New York City on Tuesday, representing more than 30 universities in the U.S., Canada and Central America that have formed a collective group with the focus of ending world hunger. The Presidents United to Solve Hunger or PUSH announced its launch this week, and the group signed the Presidents' Commitment to Food and Nutrition Security also at the United Nations. PUSH member institutions include land-grants, liberal arts, faith-based, historically black, and Hispanic-serving colleges and universities from five continents. Mississippi State is joined by fellow SEC members Auburn, Kentucky, Missouri, Tennessee, Arkansas and Alabama. (photo by Jeffrey D. Ethridge / Auburn University)

The White House has announced that President Donald Trump has designated Mississippi State University President Mark E. Keenum chairman of the Board for International Food and Agriculture Development (BIFAD).

BIFAD was created in 1975 under Title XII (Famine Prevention and Freedom from Hunger) of the Foreign Assistance Act. The board’s mission is to draw on higher education’s scientific knowledge to advise U.S. international assistance efforts.

The President appoints BIFAD’s members, comprised primarily of members of the academic community with expertise in global food security and world hunger.

“During my tenure at MSU, our university has continued to build on our longtime reputation as one of the top agricultural schools in the nation,” said Keenum. “As an agricultural economist, I have long recognized the challenge facing our planet with both a growing population and serious challenges to future food supplies. Finding ways to enhance food security is literally a matter of life and death. It is important to preventing conflict among nations and is in our own national security interests. It is also simply the right thing to do and in keeping with my very personal and deeply-held religious values.”

In 2014, Keenum was named the chairman of the Presidents United to Solve Hunger (PUSH) Steering Committee. PUSH is an organization of more than 80 universities worldwide that work together to address global hunger and food security issues. In that role, Keenum addressed the United Nations on global food security and world hunger initiatives.

In 2016, Keenum was named to the Feed the Future Evaluation Oversight Committee, which evaluated the U.S. Agency for International Development’s (USAID) Feed the Future initiative. That same year, Keenum spoke in sessions at the Global Open Data for Agriculture and Nutrition (GODAN) Summit at the UN – touting the collaboration between nearly 90 universities in the PUSH consortium dedicated to making food and nutrition security a priority.

Mississippi agricultural leaders across the state have praised Keenum’s designation to the BIFAD leadership post.

“After more than 30 years of working with Mark Keenum and watching his undeniable passion for the solutions agriculture can and must bring to the issues of world hunger and global food security, I’m gratified that the White House has recognized Mark’s truly visionary national and international leadership on these issues through this designation by President Trump,” said Delta Council Executive Vice President Chip Morgan. “I cannot think of a more capable, qualified person to lead this vital board than Mark Keenum,” said Morgan, who also serves on Mississippi’s Board of Trustees of State Institutions of Higher Learning.

Keenum was also appointed to the Challenge of Change Commission by the Association of Public and Land-Grant Universities, served on the Chicago Council on Global Affairs Agriculture Development Initiative, and was named to the USAID’s Soybean Innovation Lab Advisory Board.

Keenum began his career at MSU as a faculty member with the Extension Service and the Department of Agricultural Economics. He went on to serve as chief of staff to former U.S. Senator Thad Cochran in Washington, D.C.

Mississippi Farm Bureau President Mike McCormick, who leads over 192,000 Farm Bureau members in the state’s 82 counties, added his praise of Keenum’s selection saying that his appointment is a fitting choice.

“Farmers across our great state and nation face the challenge of feeding an increasing world population against the backdrop of unprecedented challenges,” said McCormick. “To meet those challenges, those farmers will need the best science and technology tools available. It is very fitting that MSU President Mark Keenum has been chosen by President Trump to lead the efforts of BIFAD in addressing world hunger and global food security. MSU has a long and distinguished legacy in impactful research to serve that noble and necessary mission.”