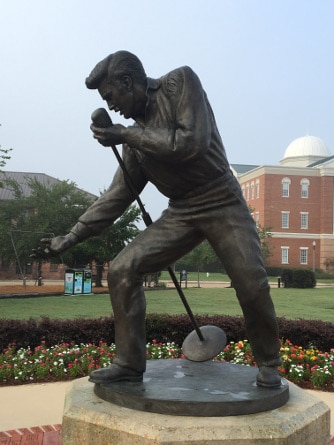 The 20th annual Tupelo Elvis Festival started on June 6th and will continue until June 10th as a tribute to the city’s native son, Elvis Presley.

“This is a beautiful, beautiful place for people to come and learn about the King of Rock and Roll,” said Neal McCoy, Executive Director of the Tupelo Convention and Visitors Bureau said.

Presley was born in a small, two-bedroom house in Tupelo on January 8, 1935. The family faced much adversity financially, but this did not stop the lone Presley child from eventually solidifying himself as the ultimate King of Rock and Roll.

After singing in the church choir for much of his time in Tupelo, Elvis knew that he wanted to become a musician. When his father could not pay off the $180 loan on the house, the family relocated to Memphis, where Elvis’s music career really began to take off after a few years.

His crazy dance moves and hypnotizing voice aided him in the production of 18 number one hits and 40 top ten hits.

It’s no secret that Elvis Presley is the city’s biggest claim to fame, so naturally, the people of Tupelo have created a fun week filled with musical acts known internationally, a Graceland-certified Ultimate Elvis Tribute Artist Competition, a 5k run, a pet parade, and much more for Elvis fans all around the world to enjoy.

“People from all over the world come,” said Tupelo Mayor Jason Shelton. “It’s just an amazing story, and it starts right here in Tupelo.

For the full schedule and locations of the festival’s events, click the link below.