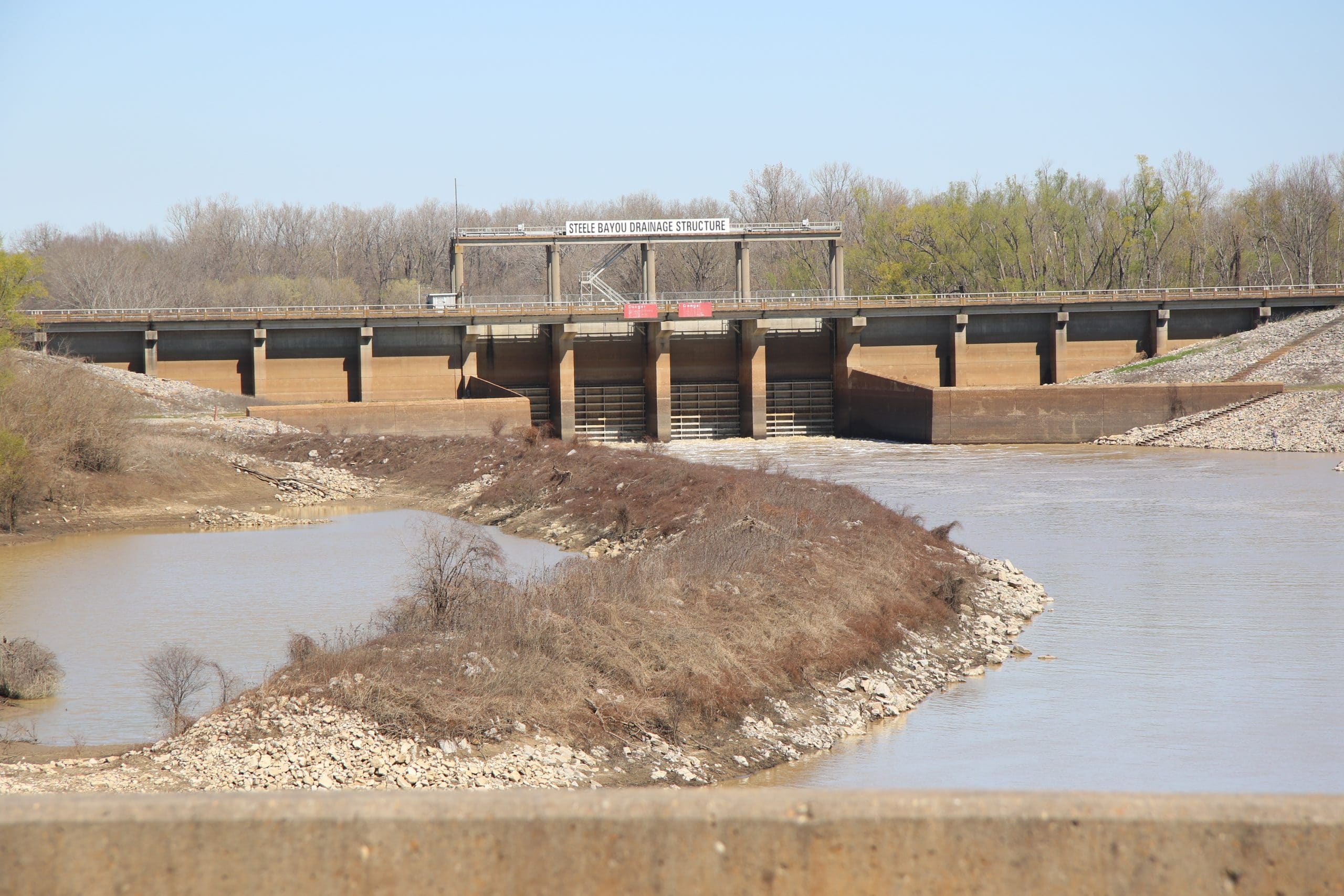 In June 2016, the Mississippi Department of Transportation (MDOT) began a project to extend the lifespan of the bridge on Highway 465 over Steele Bayou in Issaquena County.

Press release from the Mississippi Department of Transportation

The bridge was originally built over the bayou in 1959 to connect the Eagle Lake community to U.S. Highway 61. Just north of Vicksburg, Highway 465 is essentially the only way in or out for residents, vacationers and commercial vehicles, making the function of any bridge along the route an integral part of the local connectivity. Today, the average daily traffic is anywhere from 800 to 1000 motorists. Since being built, the bridge has seen multiple changes in the local landscape that necessitated the work that MDOT is performing, and is essential for the function of this important agricultural connector.

Steele Bayou parallels the Mississippi River running through the Mississippi Delta and connects to the Yazoo River. Since the 1950’s, the bayou has received improvements to stabilize the water levels for vegetation control and environmental preservation by the U.S. Army Corps of Engineers (USACE). In 1969, the USACE built the four-gated Steele Bayou Flood Control Structure about 1500 feet north of the Highway 465 bridge.

Operated by the Vicksburg District of the USACE, the flood structure provides backwater flood protection from the Yazoo and Mississippi Rivers. When water levels are high from rainfall, the gates are raised to allow water to flow out of the Delta. When the Mississippi River rises and causes the Yazoo River to back up into Steele Bayou, the gates of the flood structure are closed to keep water out of the Delta, protecting important farmland and communities from flooding.

Located at the edge of the Delta, the two structures, the bridge and the flood gates, have had a relationship that has ebbed and flowed like the changing water levels of Steele Bayou and the two rivers that outline the Mississippi Delta.

At the time the bridge was built, Steele Bayou was a free flowing river, and its foundation was designed and built based on the landscape at the time. When the flood control structure was built, it modified the velocity of the water going under the bridge. At times, water is discharged from the flood structure at a rate of 60,600 cubic feet per second and at other times the water is almost still.

The type of bridge over Steele Bayou typically has a lifespan of approximately 75 to 100 years with normal maintenance operations performed over the years as needed. As a result of the drastic changes in water velocity with the addition of the flood structure, MDOT and the USACE have collaborated to problem solve, maintain the bridge’s structure and extend its lifespan based on the new landscape.

In the late 1970’s, the bridge’s steel pilings, the Steele Bayou channel and the banks began to experience scouring from the high velocity water that caused the bridge to lean. In 1977, MDOT closed the bridge because one of the steel pile foundations s was almost severed in two due to the sand blasting effect of the high-velocity, sand carrying flows. An emergency project was let to build a detour and another project was let to make repairs. One of the steel pile foundations was replaced with a drilled shaft pile bent. Stone columns were also added to provide lateral soil stability, and the bridge was reopened in 1978.

Similar issues and repairs occurred in the early 1980’s, and in 1983, USACE and MDOT met to discuss the recurring hazards that threatened the bridge and identify actions the USACE could take to eliminate the problems. They identified the hazard as high velocity water and the USACE stabilized the channel by lining it with rip rap extending downstream of the bridge in 1985.

MDOT continued to see deterioration in the channel, and in 2002 MDOT worked with the U.S. Geological Survey to study the potential impacts to the bridge. Another project to replace a pile bent with drilled shafts was completed in 2004.

These repeated replacements of the pile bents had a better chance of withstanding the velocity of the water, but there was still channel and bank scour and erosion downstream of the bridge. This was especially noticeable during the extreme fluctuations in the Mississippi River water levels at the time, including the historic 2011 flood.

Following that discovery and with the assistance of the Mississippi River Commission, the USACE funded and performed a project to fortify the area around and downstream of the bridge. They filled the scour hole with extremely large rip rap that wouldn’t be affected by the high water velocity. Since that work, scouring has stopped and the foundation soil is now protected.

The two structures have been trying to coexist for almost 50 years. It took different generations of engineers and state and federal collaboration to work together to figure out the issues and find solutions to protect and serve the same people in different ways.

The current maintenance project on the bridge over Steele Bayou will allow the bridge to reach its maximum lifespan. These repairs will to give MDOT the time to plan a larger replacement down the road. A replacement bridge would need to be designed with foundations out of the water so that it’s no longer impacted by the changes in water velocity. The bridge would need to be longer and taller, and could cost approximately $25 million given the conditions of the area.

After the solution was discovered and investment put into maintaining these two structures, MDOT is working to be good stewards of the taxpayer’s dollar by getting as much life out of what is already owned before a new bridge is built. The current project is expected to be complete by the end of the summer and will give the bridge another 20-25 years of life.

Despite their almost 50 year relationship, these two structures continue to provide both the connectivity for the local agriculture and communities and protect them during the regular changes in water levels in the rivers and in the Mississippi Delta.