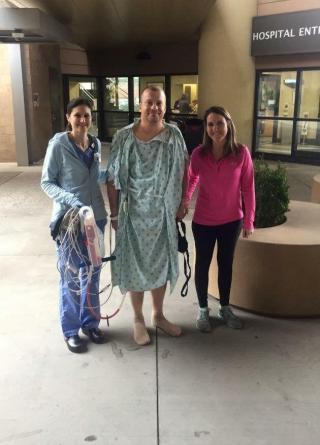 An officer has been released from the hospital after a fatal shootout with police in North Mississippi leaves two deputies injured.

Officer Brandon “Lee” Hutchens was released from the hospital after being involved in a fatal shootout involving another officer, Sergeant Hunter Garrett who was also injured. The suspect Kevin Darnell Washington was also shot and did not survive.

Hutchens’ fiance, Katelyn Treadwell, said in a Facebook post that he was being released from ICU and in the step down room. She said Hutchens’ is eager to get home.

In an effort to help the deputies injured the community has reached out on Facebook to offer support:

“Hey Friends! It’s been a crazy couple days for our local law enforcement here in Desoto County. For those who are not local, 2 of our deputies were shot Wednesday night while trying to apprehend an armed robbery suspect. Thankfully our deputies will be okay. I’ve had several people message me about selling a support law enforcement style shirt but I just did not feel right about profiting or benefiting in any way from the recent events of Wednesday night. HOWEVER, I would love to be able to give back to these men and women who risk their lives daily for us. SO..I’ve been working with a wonderful local T-shirt company and have come up with a design that will work for both men and women to show law enforcement that we have their back. I spoke with Director Lent Rice last night and
100% of the profit will go directly to the Desoto County Sheriff’s Department Benevolent Fund. This fund has been set up to assist Deputies with financial support during times of need. I plan to leave this order open for 1 week and gather as many orders as possible. If you would like to order please click the link below. Local pickup will be in Hernando, MS

The suspect then drove to the Kroger near 1-55 and Stateline, where the confrontation with police commenced. The shooter is dead. The deputies, one who is a K-9 officer, are expected recover fully.

The deceased suspect is also believed to have been involved in at least three other robberies prior to last night’s shootout resulting in his death.

Mississippi farmers could see a rise in exports