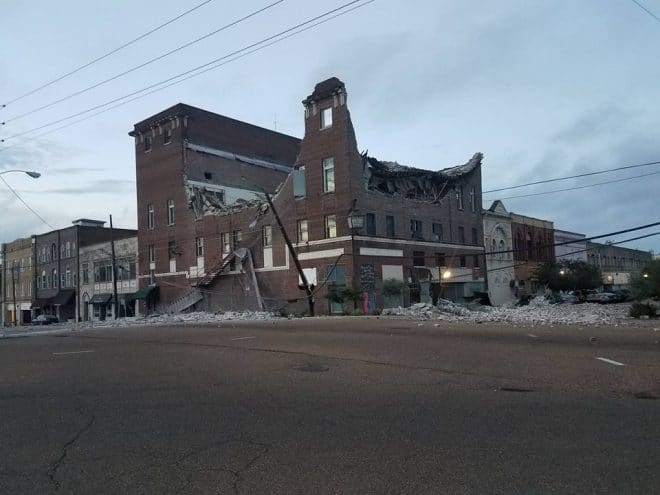 The top floor of the Jubilee Performing Arts Center in McComb, known as Kramer Roof to locals, collapsed on Sunday afternoon.

A special meeting was held by McComb officials to discuss the next steps for building stabilization.

Captian Preston Wells with the McComb Fire Department said that the intersection at at the JPAC building, downtown McComb will be closed until at least Wednesday this week. Structural engineers are coming in to assess what happened as well as begin clean up.

The collapse happened around 6:30 p.m on Sunday, spreading bricks and debris all over Main Street and Broadway.

The following video was footage taken by a drone opperated by Caleb Byrd given to Supertalk Pike-County:

There were no injuries in the incident, however members of JPAC had been in the building just hours before the collapse occurred.

“They are rerouting traffic through downtown. PD will be on scene through the night and through tomorrow to see what else is going to have to happen,” said Wells.

The collapse brought down electricity wires, cable wires, and light polls. It could be days before there is an idea as to what caused it to happened.

Distracted walking on the rise as a cause of death