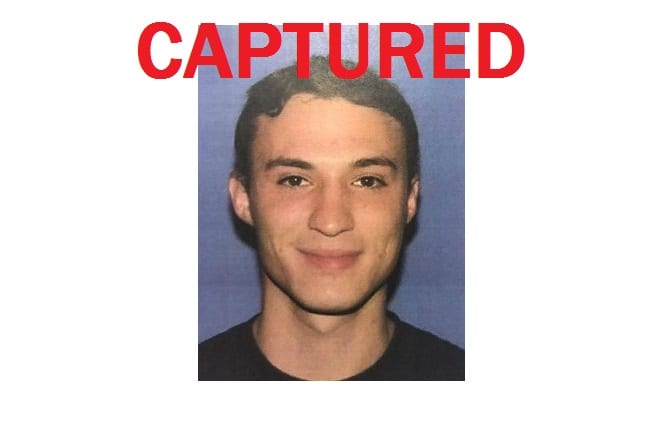 According to Clark County authorities, a call came in Saturday morning from a concerned citizen who saw someone jump out of a car on a country road near Stonewall, just south of Meridian.

Not long after, police got a call about a body lying in the middle of that same road not far away. When police arrived, they identified the body of John James, and determined he had been killed by a gunshot.

Their main suspect – Joshua Allen Miller – had been on the run since, but was captured Monday morning at a Ramada Inn in Laurel. He faces one count of capital murder.

UPDATE 8:05AM According to a Facebook post by Jones County Sheriff Alex Hodge, Miller was taken into custody without incident at the Ramada Inn in Laurel earlier Monday morning.

UPDATE 7:30AM Reports are coming in that Miller has been captured alive and without incident in Laurel.

Joshua Allen Miller, believed to be armed and dangerous, is wanted for the death of John James in Clarke County, where the body of James was found lying in the middle of a country road near the town of Stonewall, MS this Saturday.

Here’s the information, according to the Clarke County Sheriff’s Department,

“WANTED PERSON
According to Chief Deputy Barry White around 7:00 [Saturday] morning. The Clarke County dispatch received a call from a citizen about someone jumping out of a vehicle on CR 350 close to the city limits of Stonewall. After stonewall Police department arrived on scene, the Clarke County dispatch received another call from another citizen about a subject laying in the middle of CR 350 about a quarter mile from the city limits. After further investigation it was determined that John Wayne James had been shot. The suspect in this shooting is Joshua Alan Miller (aka Josh Miller). The Clarke County Sheriff’s department will be charging Joshua Alan Miller with Capital Murder. Miller was last seen in a 2007 Nissan Pathfinder, tan in color with tag number LCY891. The vehicle may have damage to the front end. If anyone has any information leading to the arrest of whereabouts of Miller please contact the Sheriff’s Department 601-776-3960 or Crime Stoppers 1-855-485-8477″