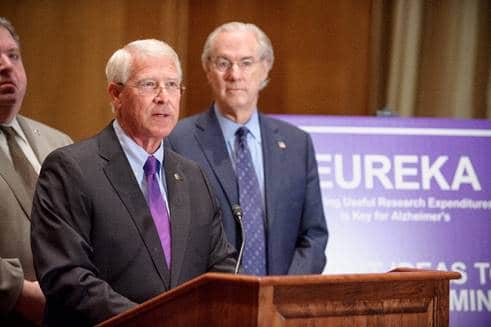 U.S. Senator Roger Wicker announced the launch of a prize competition that will award up to $400,000 to teams of researchers who can provide innovative solutions to improve care for patients with Alzheimer’s disease and related dementias.

Wicker is the author of legislation that directed the National Institutes of Health (NIH) to create a series of prize competitions to reward accomplishments in the field of Alzheimer’s research.

“The launch of this competition is outstanding news for the millions of Americans who suffer from Alzheimer’s and other forms of dementia,” Wicker said. “I am thrilled to see the first fruits of my years-long push to spur innovation and put more resources toward curing this devastating disease. I encourage NIH to look for other ways we can enhance disease research through competition.”

The contest, The Improving Care for People with Alzheimer’s Disease and Related Dementias Using Technology (iCare-AD/ADRD) Challenge, is a EUREKA prize competition created by the National Institute on Aging, which is part of the NIH.

Wicker introduced legislation titled the “Ensuring Useful Research Expenditures is Key for Alzheimer’s (EUREKA) Act” in 2015, which was signed into law in December 2016 as part of the “21st Century Cures Act.” Wicker’s legislation was inspired by the success of other prize-based challenges, which are considered an effective investment for the government because agencies pay only for success.

The competition has a total prize purse of $400,000 and will reward challengers who develop solutions for a technology-based application to connect relevant stakeholders or who create new technology applications to improve dementia care coordination or care navigation.