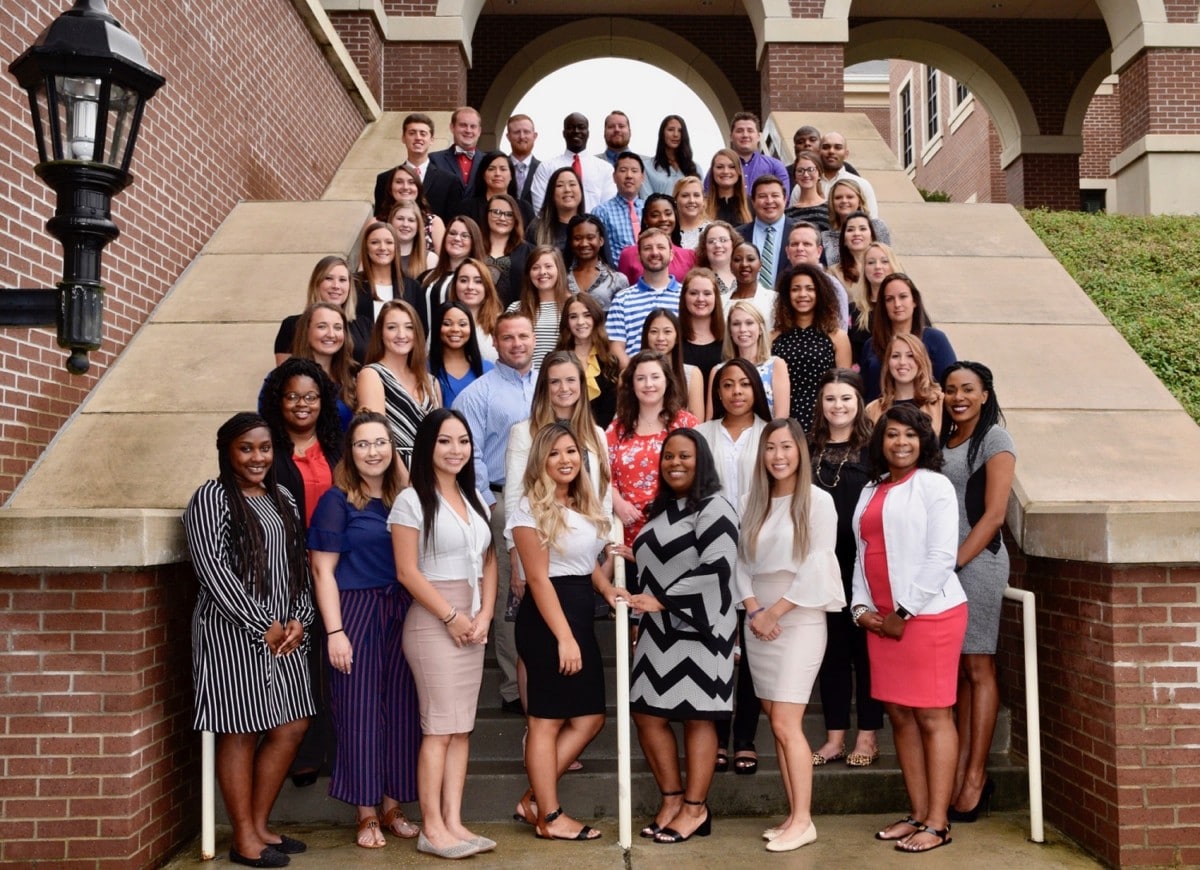 The first class of Pharmacy students at William Carey University will start their courses today. William Carey recently received approval from the Accreditation Council for Pharmacy Education to admit the first class, of 58 students, to its new pharmacy school at the Tradition campus in Biloxi.

The students represent many backgrounds and professions, including Douglas DeGeorge, a Biloxi police officer who plans to work full-time while attending pharmacy school.

“I did my four-year degree the same way. I worked full-time at night and went to school during the day,” DeGeorge said. “I slept in my car sometimes to get a nap in. You’ve got to do what you’ve got to do. In the end, I graduated with a bachelor’s degree in biology with a minor in chemistry.”

A 2003 graduate of the police academy, DeGeorge is an interdiction officer, working on the interstate looking for wanted felons or people transporting drugs and money.

“Police Chief John Miller was very supportive. He listened and asked, “What can we do to help?” I couldn’t ask for a better boss.”

Because of his class schedule, DeGeorge will have to give up membership on the SWAT team and bomb squad. But not the canine unit. He and his partner, a Belgian Malinois named Atlas, will remain together.

The average age of the first pharmacy class is 27.5 years. They include people from Mississippi, Alabama, Louisiana, Massachusetts and North Carolina. The majority of them, however, are from southern Mississippi.

Gloria Rawls is from Hattiesburg. She’s married with two children and served five years in the Army National Guard.

“I think the location of the pharmacy school, a few minutes from the Gulf Coast, is great because I can just drive to class every morning. It makes it easier on students from this part of the state,” Rawls said.

Dr. Michael Malloy, dean of the WCU School of Pharmacy, said the location was a factor in the decision to seek accreditation for the new program from the Accreditation Council for Pharmacy Education.

“It’s the second pharmacy program in the state and the only professional degree program on the Gulf Coast,” Malloy said. “This makes it the only opportunity to get a professional degree without having to drive for hours or move to a different place. Students from the Gulf Coast and south Mississippi can live at home while they go to school. They can stay near their support systems, their families, and friends.”

Candace Webber has been a pharmacy technician for 11 years. She wants to step up to the next level, but she has a busy life. Her husband serves in the U.S. Navy and works in Gulfport. Webber has four children, ages 6, 10, 14 and 15.

“I’m going back to my original dream,” Webber said. “I’m returning to school after 13 years. I’ve been out of school so long that I had to re-take my sciences. I went to school last year and worked to qualify for this program. We’ve already had a family meeting at my house because everyone needs to understand that I have to study.”

Webber and her classmates will need that level of determination.

William Carey University’s pharmacy school is an accelerated program, enabling students to earn a Doctor of Pharmacy degree in two years, 10 months, instead of the more usual four years. Classes will meet year-round in four terms of 10 weeks each. It is one of only 11 accelerated pharmacy programs in the country – and the only one in Mississippi, Alabama, and Louisiana.

Dr. Tommy King, president of William Carey University, spoke to the inaugural class during orientation last week and blessed the opening of the school.

“Through the years, William Carey University has sought to identify needs and to meet those needs,” King said. “We’ve had a school of nursing for decades. With the addition of a medical school, a physical therapy school and a health information management program at our Hattiesburg campus, we increasingly saw the need to help increase access to health care.”

WCU Provost Dr. Scott Hummel said that while the shortage of pharmacists is not as severe as other portions of the U.S., Mississippi still has a severe shortage.

“Providing quality healthcare is challenging in Mississippi. It’s a problem of access exacerbated by low incomes and the fact that Mississippi is a largely rural state. Our approach is to develop more primary care resources to meet the needs where they exist, not just in our larger cities.”

However, Hummel said they are now going to be a part of the solution to meeting the state’s needs for health care.

“It’s incredibly exciting to be able to see Carey be a part of improving overall healthcare and access to health care in the state of Mississippi,” Hummel said.

William Carey University’s School of Pharmacy’s 33,000-square-foot building is currently under construction in Tradition and will be named Sanderson Hall to honor Joe Frank Sanderson Jr. and his wife, Kathy who gave generously to the school.

“We’ve built the building for larger than the inaugural class, so we do have room to be able to grow the program,” Dr. Hummel said.

Last fall, Gov. Phil Bryant announced that the U.S. Department of the Treasury had issued a $1 million grant award for accreditation support for the William Carey University School of Pharmacy. The award is part of the RESTORE program, established after the BP oil spill and overseen by the Department of Environmental Quality.

“The accreditation of the William Carey School of Pharmacy will be a boost to the economy for South Mississippi as well as making a difference in students’ lives,” Said Governor Phil Bryant. “We’re pleased to support the university with RESTORE funds that were allocated for this important initiative.”

Pharmacy students and faculty are expected to move into Sanderson Hall in October.