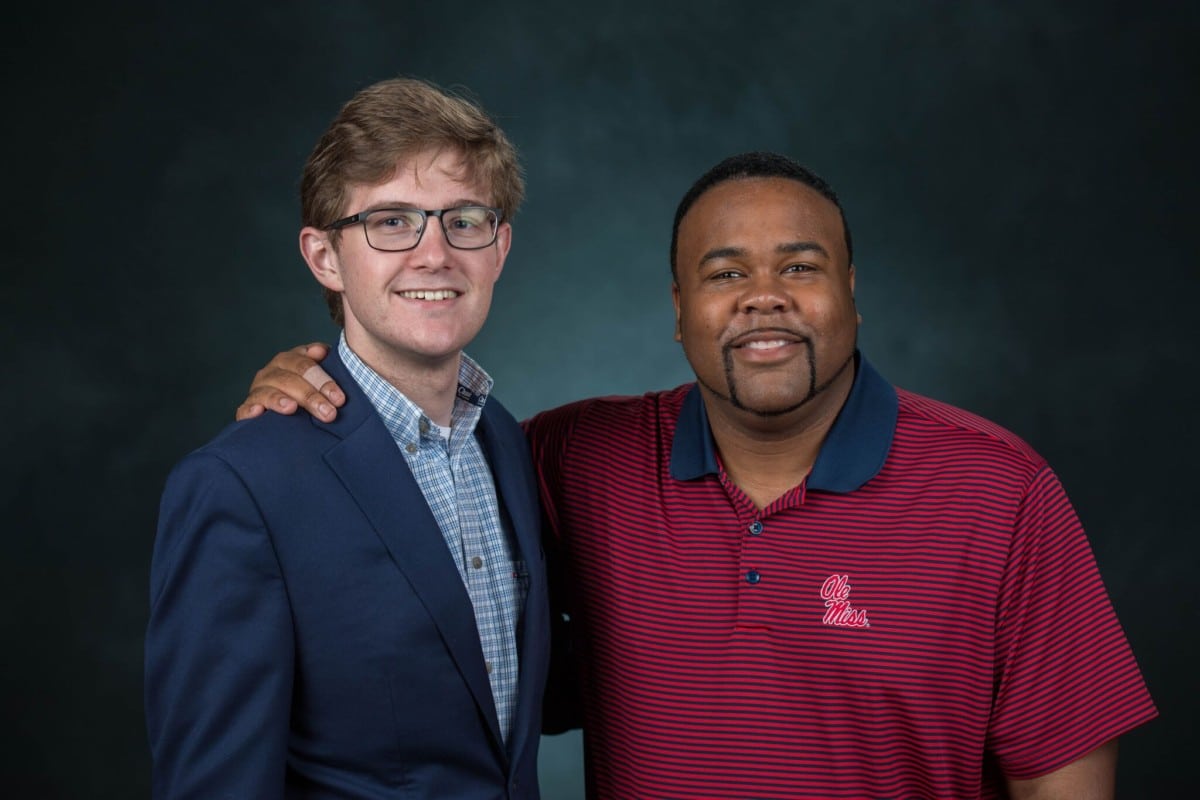 Three years ago, Seth Dickinson was just another University of Mississippi freshman enjoying time off for spring break. That is, until an unexpected hemorrhagic stroke left him comatose on his bedroom floor.

When Dickinson awoke from his coma nine days later, the Mantachie native was paralyzed and mute. Gone was his ability to read, write, speak and walk. Worst of all was being told that he would no longer be able to pursue his education at the university.

Through his own determination and with strong encouragement from a supportive university staff member, he recovered, returned to school and will be walking across the platform Saturday in The Pavilion at Ole Miss to receive his degree in public policy leadership.

“I’m differently abled in a way that I am recovering still, but for the rest of my life I will never take the moniker of ‘disabled,'” Dickinson said.

Dickinson is the first person in his immediate family to attend and graduate from a four-year college or university. His decision to attend the university was a direct result of his initial meeting with Ryan Upshaw, assistant dean of student services in the School of Engineering.

As a high school senior, Dickinson participated in a Lott Leadership Institute summer program, and Upshaw traveled to Washington, D.C., with the group.

“I knew he was the type of student we needed here at the university,” said Upshaw, one of two staff recipients of this year’s Thomas A. Frist Award, which recognizes faculty and staff members for outstanding volunteer service to Ole Miss students.

“I was instantly drawn to Ryan,” Dickinson said. “He was the biggest salesman for the university I chose to call home.”

The transition from small high school to university life was difficult, Dickinson said.

“I remember one night in particular where I sat, crying, in my dorm because I thought I would never adjust,” he said. “Then it hit me: Ryan cares. So, I sent a text that just said, ‘Help Me.'”

Within minutes, Upshaw responded with a phone call that resulted in what seemed to be Dickinson’s clear path to student success.

“Thanks to Ryan Upshaw, I became heavily involved in applying for clubs and organizations,” he said. “With his help and encouragement, I became a member of ASB, Freshman Council, Ambassadors, the Honors Senate, Delta Psi fraternity and, eventually, the Columns Society,” Dickinson said. “It was a whirlwind of joy and happiness. Life was beautiful.”

Dickinson said Upshaw was his “ray of sunlight and hope” after the storm of his affliction.

“I’ll never forget what it was like to wake up from a coma in a hospital bed, surrounded by my parents, doctors, and nurses, and none other than Ryan Upshaw,” he said. “Seeing him, a peace fell over me instantly.”

“While he is a student, I consider him a friend,” Upshaw said. “Two of my proudest moments with Seth were watching him be recognized with Who’s Who honors and seeing him be named ‘Greek Man of the Year.'”

Upshaw had been to the hospital numerous times, had painted signs for Dickinson with his friends and family, and consoled his distraught mother as she regretfully had to have her son de-enrolled.

“Ryan knew the pain it caused her and cared enough to be a part of the comforting process,” Dickinson said. “He also became part of my healing process.”

Upshaw continued to visit Dickinson in the hospital numerous times, bringing him well-wishes and reminders that his home was in Oxford.

“It was this encouragement that led me to fight so hard to recover,” Dickinson said. “Ryan was the first person I called to cry to after I was told that I would never walk again. He said, ‘It’s gonna be hard to get across the Grove if you aren’t walking. I know you can do it.'”

Upshaw’s words lit a fire within Dickinson. He entered physical therapy and gradually fought his way back to mobility.

“Ryan was the first person I requested my family send a video of me taking my first steps,” Dickinson said. “Because of him, I decided not to give up.”

The combined experiences of the past three years have reshaped Dickinson’s original life plans. Before the tragedy, he aspired to become “future governor of Mississippi.” While he still plans to go to law school, Dickinson’s goal has changed to become a “health care administrator in Mississippi.”

Before the stroke, he did not consider himself a champion of disability rights.

“I always had friends who were disabled, and I would think to myself, ‘Oh, poor them,” without thinking of the perspective, ‘What if that were me?'”

Now, Dickinson thinks of himself as someone who is, if not a champion of disability rights, someone “who is giving his damnedest.”

“Diversity to me, in this regard, is not just making sure everyone gathers at the same table, but everyone has a way to get to the same table,” Dickinson said. “That’s my mantra moving forward: giving everyone equal opportunity to have a voice.”

Upshaw said Dickinson is an inspiration to him and to many others.

“He set a goal of returning to this university after his stroke, and he came back stronger than ever,” Upshaw said. “He distinguished himself as a student leader through involvement in ASB, the Honors College, the McLean Institute and other groups.

“Anyone who knows him can sense the pride he has in the University of Mississippi. I am glad that he plans to stick around to attend law school here.”