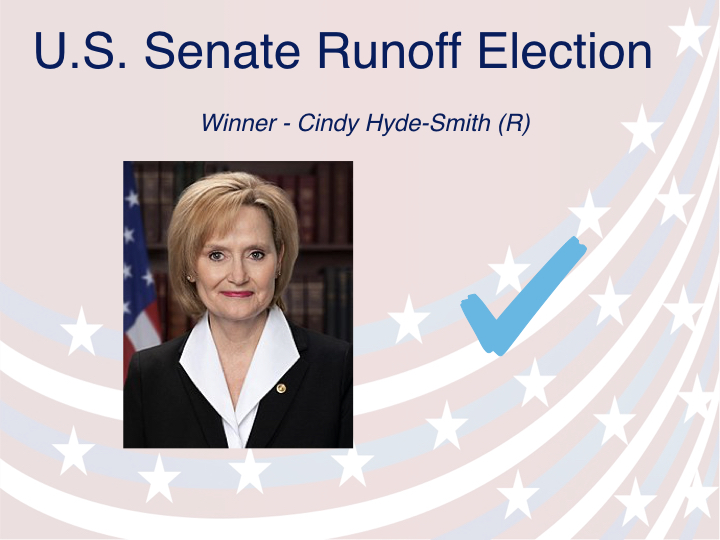 The race has been called in the runoff election for the final seat in the U.S. Senate.

With nearly 75% of precincts reporting, the race has been called as incumbent Senator Cindy Hyde-Smith has defeated Democratic challenger Mike Espy.

At the time the race was called, Hyde-Smith held a 13-point lead over Espy (56.1% to 43.9%). Hyde-Smith took the stage, to thank her supporters and stated that she is ready to get back to Washington to work on behalf of all Mississippians.

The Senator’s campaign didn’t come without controversy as her remarks regarding a “public hanging” made national headlines. Governor Bryant joined said that the media’s commentary surrounding the remarks fueled the Republican turnout at the polls.

Hyde-Smith will now return to Washington to finish the remainder of Thad Cochran’s term which she began serving after she was appointed by Governor Bryant in April. President Trump’s endorsement of Hyde-Smith and her 100% voting record with his agenda were likely key factors in her victory.

After the race was called, President Trump took to social media to congratulate the newest U.S. Senator.

Congratulations to Senator Cindy Hyde-Smith on your big WIN in the Great State of Mississippi. We are all very proud of you!

Hyde-Smith becomes the first woman to be elected to the U.S. Senate from Mississippi.