In 2015, 21 Mississippi public school districts filed a lawsuit seeking to receive funds totaling $235 million that they claimed to have missed out on from the Mississippi Adequate Education Program (MAEP) spanning a five-year period. Today, a judge in the Hinds County Chancery Court has ruled that the school districts are “not entitled to the relief.”

The decision is based on the fact that section 37-151-6 of the Mississippi Code (stating that MAEP be fully funded) is not a binding mandate, and the language doesn’t specify that funds must be set aside for the program each year.

MAEP was passed into law in 1997 as a way to fund public education across the state, but the program is funded on a year-to-year basis which factored into the court’s decision because the legislature chose not to fully fund the program for the years in question, which were 2010-2015.

Because the language in MAEP uses the word “shall” when it comes to funding it allows the legislature to make decisions each year. In 2015 when the lawsuit was originally filed, Speaker Pro Tempore Greg Snowden discussed what makes it difficult to fully fund the program.

“The law says you shall do this, but the legislature has to make decisions each session based on the budget,” Snowden said. “A lot of things say shall, it’s more of a strong suggestion.”

In the court’s explanation, they stated that if the language was different, and it was a binding mandate, then they would’ve been obligated to award the funds to the 21 districts.

“I note the situation would be different if the Legislature had appropriated money to the Mississippi Department of Education, which in turn failed to distribute it to the Districts as directed,” a footnote reads. “If such was the case, we would be empowered to order the money distributed according to the Legislature’s appropriation.”

The court document concludes by stating that the legislature acted within its constitutional authority.

Former Governor Ronnie Musgrave was involved as one trial court attorneys for the school district and played a key role in getting the lawsuit filed. Lt. Governor Tate Reeves released a statement praising the court’s decision and referenced the former Governor’s involvement in the case.

“Mississippi’s Constitution is clear – it is the Legislature’s sole authority to allocate tax dollars, and I appreciate the decision of the justices to dismiss the lawsuit by a former Democrat elected official,” Lt. Gov. Reeves said. “I’m proud Mississippi’s Republican leaders have prioritized education at all levels and spent about $400 million more than it did just six years ago, and we will continue to find more ways to invest in the classroom to provide opportunities for our kids.”

“I am pleased the Mississippi Supreme Court has upheld the constitutional authority of the Legislature to appropriate your hard-earned tax dollars. School funding should not be subject to frivolous litigation brought by a Democrat trial lawyer,” Bryant said.

A full list of the schools involved in the case can be seen below: 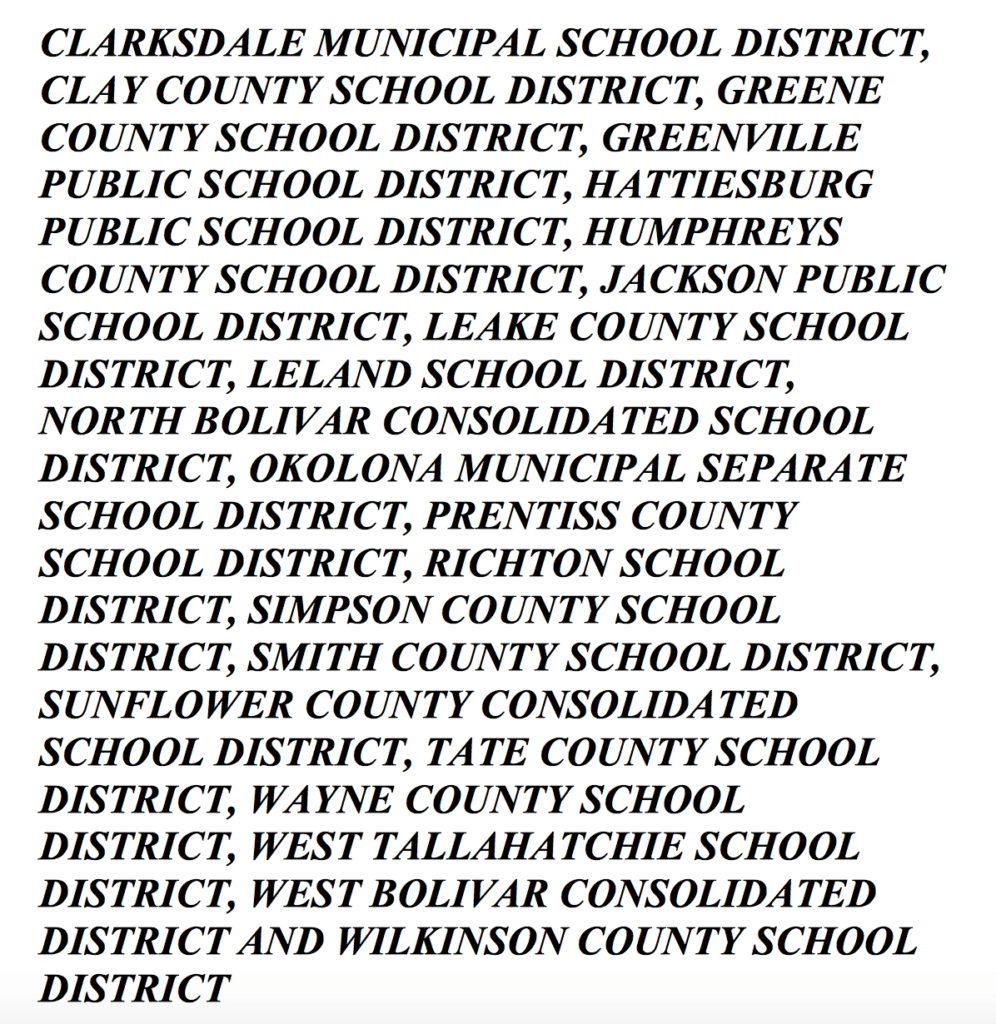