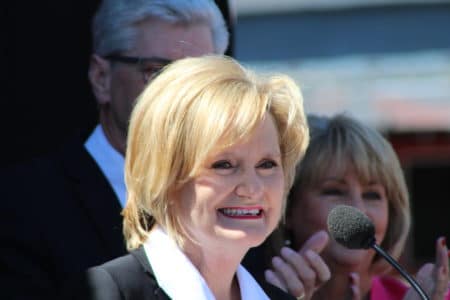 U.S. Senator Cindy Hyde-Smith said generations of American men and women have served our country in the Armed Forces and sacrificed to protect our freedoms and promises are made to them that the federal government has sometimes failed to keep like it should. She said this is a problem she’s committed to working to improve so veterans and their families get the benefits they earned through their service.

“The responsibility for keeping our commitments to veterans falls on the federal government,” said Hyde-Smith. “As a lawmaker at the state, and now federal level, I’ve seen how hard it is for veterans in rural areas to see doctors and other specialists. We’ve got to do better.”

She stated that the Senate will soon approve a funding bill that will help improve the delivery of VA benefits to veterans.  The FY2019 Military Construction, Veterans Affairs, and Related Agencies Appropriations Bill includes a $5 billion increase for the U.S. Department of Veterans Affairs to provide the healthcare, benefits, and memorial services earned by U.S. service members and veterans.  In total, the bill provides a record high of $78.3 billion overall to support VA medical treatment and healthcare for approximately 9.3 million enrolled patients in FY2019.

“The bill also includes $64.3 million, which I supported, to maintain the Armed Services Retirement Home which operates facilities in Gulfport and Washington, D.C.,” said Hyde-Smith.

She said on the 74th anniversary of D-Day, President Trump signed the VA MISSION Act, which consolidates seven programs into a single, streamlined Veterans Community Care Program to provide veterans with access to health care and services in their own communities, which should help veterans obtain care outside the VA system more easily and much sooner.

“I am particularly pleased the VA MISSION Act expands eligibility for the VA Program of Comprehensive Assistance for Family Caregivers to all generations of veterans seriously injured in the line of duty,” said Hyde-Smith. “Family members take on the duty of being a caregivers for so many of these veterans.  I’m hopeful that more Mississippi families will benefit as this program is opened up to veterans injured during World War II, the Korean, Vietnam, and Gulf Wars.”

She also stated that their job didn’t end with the signing of the VA MISSION Act.

“Congress must still find the annual appropriations to carry it out,” said Hyde-Smith. “I will work with my colleagues on the Senate Appropriations Committee to see that this law is funded and does not become another hollow promise.”

She is also looking for other avenues to help veterans.  For example, she’s cosponsored the Military Widow’s Tax Elimination Act to end the practice of requiring surviving widows to forfeit Survivor Benefit Plan benefits if they’ve also been awarded VA dependency and Indemnity Compensation.  This so-called “widows tax” policy diminishes benefits for about 64,000 beneficiaries nationwide, including more than 800 in Mississippi.

“I’ve also introduced a bill to amend the Wounded Warrior Federal Leave Act to create time for veterans in the legislative branch to get to their medical appointments,” said Hyde-Smith. “Congressman Gregg Harper has led the charge on this issue in the House of Representatives, and I’m proud we can work together to help veterans not only in Mississippi, but across the country.”

Hyde-Smith explained that many veterans in Mississippi struggle with the bureaucratic process of the Veterans Administration and when they think about the billions of dollars spent on veterans nationwide, they may wonder who is looking out for them. She said her and her staff are ready to help – not just to fund our national policies but also to address the needs of Mississippi veterans.

Meet the candidates in Tuesday’s runoffs