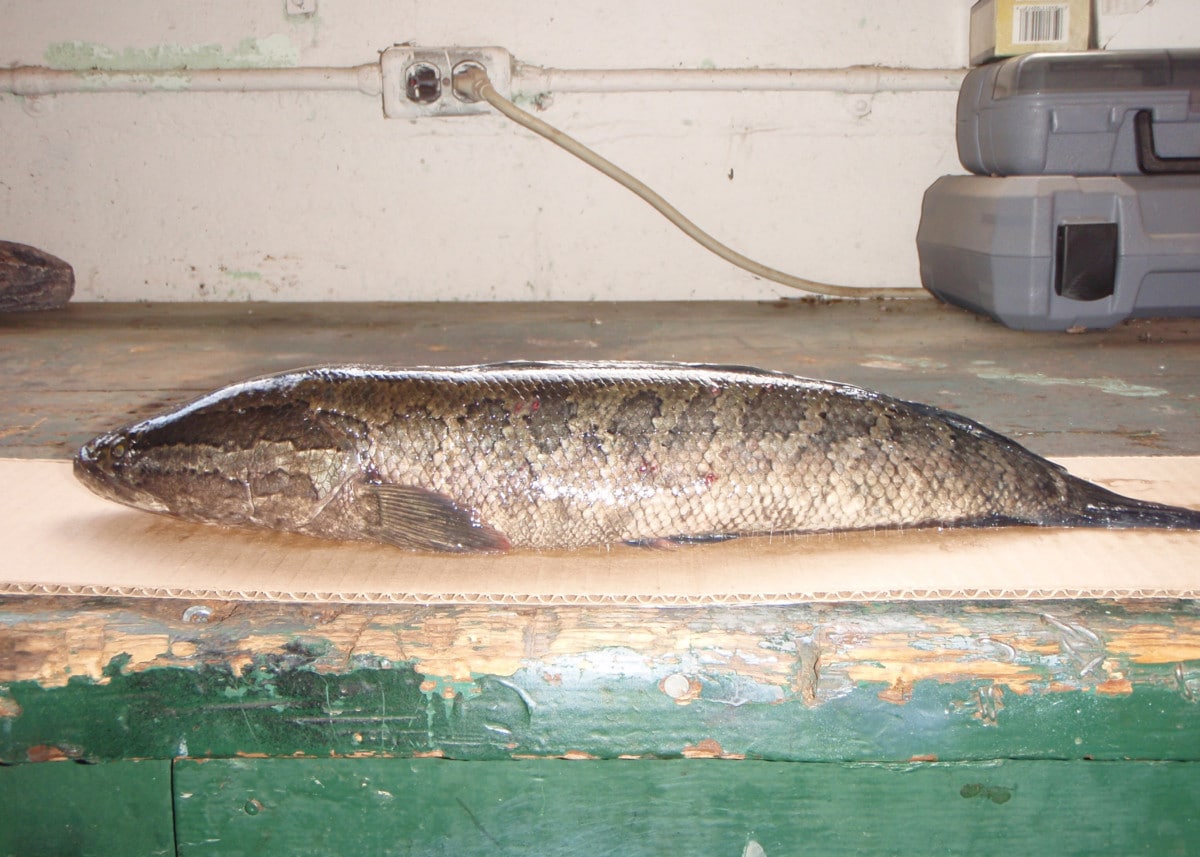 Catching a northern snakehead fish may not seem like
such a big deal, but it is because the unique critter is not native to
the U.S. and it’s illegal to transport, sell or possess live snakeheads in
Mississippi.

Snakeheads have been reported frequently since 2008 in Arkansas after an
accidental release from a commercial fish farm. These fish are native to
Russia, Korea, and China. In China, they are widely cultured for food and
frequently sold in live fish markets. Some believe the snakehead made its
way around the U.S. by individuals releasing them from the live food fish or
the aquarium fish trade. Established populations have been found in
Arkansas, Virginia, New York, Pennsylvania, Maryland, Hawaii, Texas, Florida
and a few other states.

Northern snakeheads are similar in appearance to Mississippi’s native
bowfin, also known as grinnel. The northern snakehead can reach lengths of
about 33 inches and are generally golden tan to a pale brown with dark-brown
mottling. Their jaws contain rows of small teeth similar to the pike and
pickerel. The fish also have large canines on the lower jaw and palatines,
the bones on each side of the palate.

Northern snakeheads are typically found in shallow, backwater areas and can
breathe air. This ability allows them to survive for extended periods out of
the water by going dormant as long as they are in a moist environment. The
fish can wiggle and flop short distances on land in order to find new
waters.

Snakeheads’ impact on native fish populations is unknown. Based on
experiences in other states, most believe the impact on our native
Mississippi populations will be minimal. It is likely that the snakehead
will travel to other bodies of water, especially other oxbows connected to
the Mississippi River. The fish has a wide tolerance for water temperatures
and environmental conditions, so they probably will survive, reproduce and
spread. Aquatic insects, catfish, crawfish, frogs, minnows, carp, and bream
are a large part of the diet for northern snakeheads.

The MDWFP asks that if Mississippians catch a northern snakehead, they keep it, photograph it, note when and where it was caught, and then report it to the Fisheries Bureau of the MDWFP. In addition, The fish must not
be transported alive.