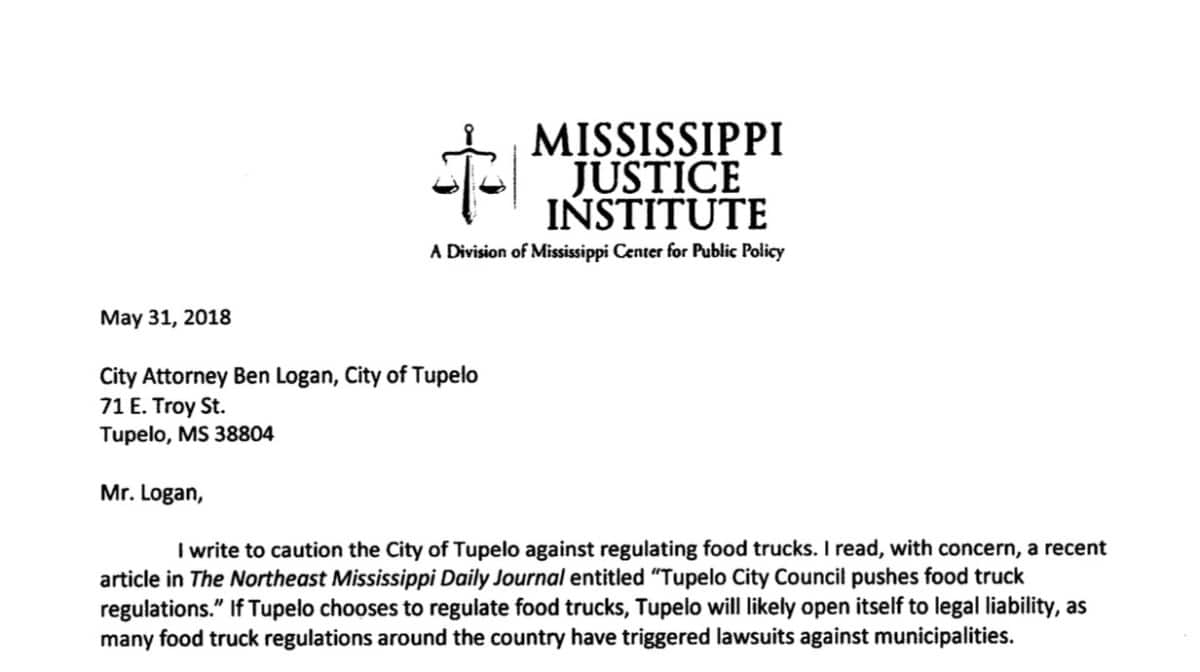 The Mississippi Justice Institute recently sent Tupelo city leaders a letter warning them that placing regulations on food trucks within city limits could lead to a lawsuit.

A majority of the city council members, excluding Mayor Jason Shelton, are in favor of enacting an ordinance seeking to regulate the distance between the food trucks and brick and mortar businesses. MJI Director Shadrack White persistently warns the city of possible, future lawsuits within the letter if such an ordinance is passed.

“If Tupelo chooses to regulate food trucks, Tupelo will likely open itself to legal liability, as many food truck regulations around the country have triggered lawsuits against municipalities,” White wrote in the opening paragraph of the letter.

Referencing a similar case titled Pizza di Joey v. Mayor of Baltimore from this past December, in which the idea of such an ordinance was soundly disposed of, White believes that Tupelo could be the next city to get sued if the city goes through with the regulations.

The same question arises in the situation of Tupelo that has been present within all other cases concerning food truck regulations in recent years: is the ordinance for the sake of the citizens or for the protection of existing brick and mortar restaurants from outside competition? White believes the latter.

“Regulations about how far a food truck can be from a restaurant have nothing to do with consumer safety,” White said. “It’s simply an attempt to protect existing businesses from newer businesses.”

White may be correct as Ward 7 Councilman Willie Jennings has reportedly stated in that past that the protection of “established businesses” are a priority.

For the full letter from the MJI, click here. Tupelo City Council meetings are held on the first and third Tuesday of every month where this will likely continue to be a hot-button issue.