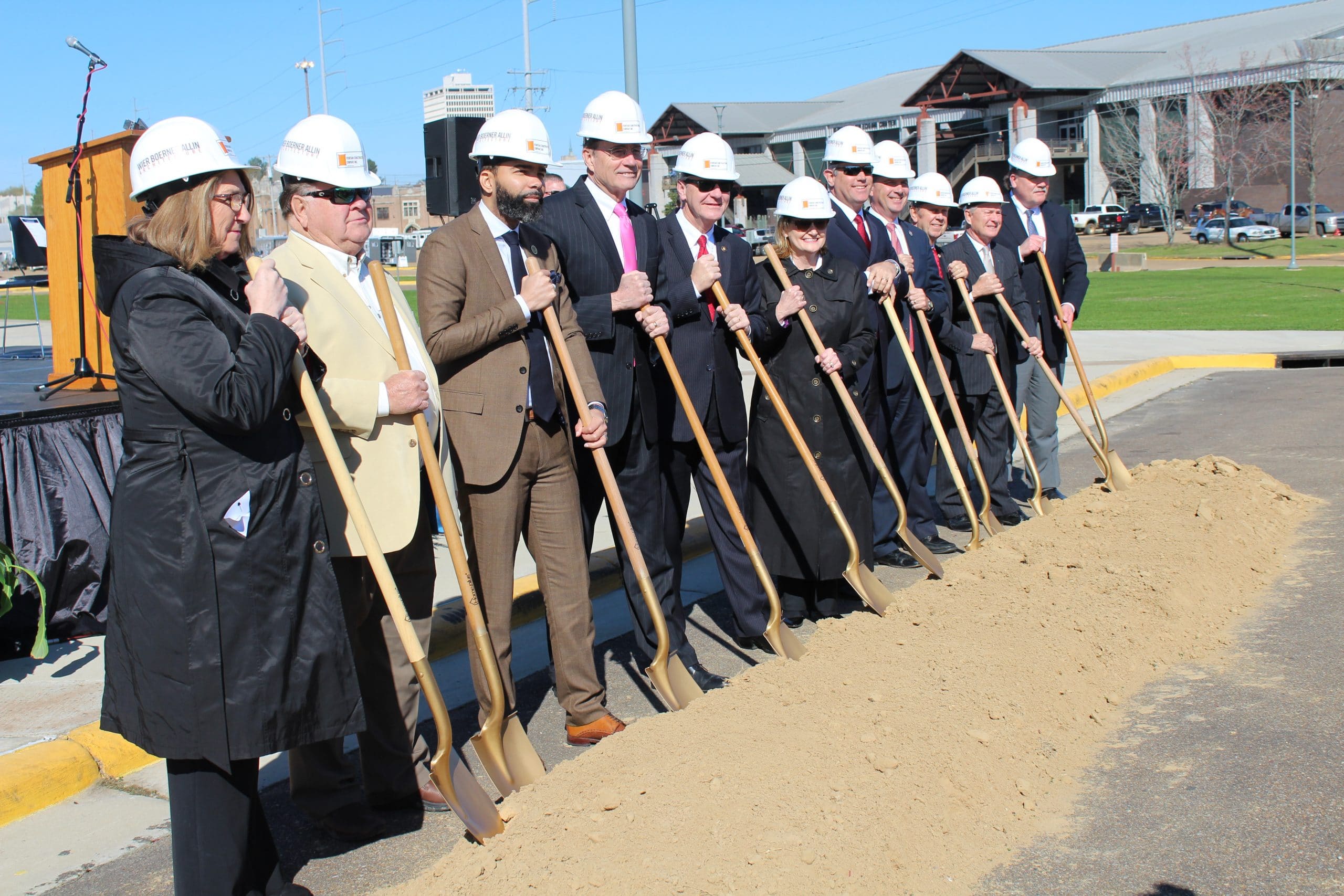 This morning, state leaders gathered at the Mississippi Fair Grounds to break ground on the brand-new Mississippi Trade Mart.

The new facility will replace the standing Trade Mart, which is currently across from the Mississippi Coliseum, and was built in the 1970’s. The new facility will be connected to the Coliseum and will create a more usable layout. Commissioner of the Department of Agriculture, Cindy Hyde-Smith highlighted the importance of the Trade Mart and how a new facility will open up countless opportunities for the city of Jackson and the entire state.

“We are very successful in the Trade Mart we have; we booked 48 events out of 52 weekends last year, so it’s not ‘build it and they will come.’ They’re here and we need to take care of them,” Smith said. “So, now we can construct a new facility that has input from the vendors themselves, designed to be the most conducive facility that we can possibly build, to assist them and promote them and all of the other factors that come along with trade shows. This will be an economic driver for the city and the state.”

The current facility provides 66,000 square feet of usable space and the new facility will approach 110,000 square feet. Over the years antique shows, gun shows, craft shows, auto shows and the “Mistletoe Marketplace” have been held in the space. Smith says that the additional space in the new Trade Mart will open up the opportunity for boat shows, logging shows and several other types of trade shows.

Governor Bryant recalled seeing the construction of the current building in the 70’s when he was looking for tickets to an Elvis concert and said that it was clear that the construction “had gone to the lowest bidder”, and that the time has come to replace it. In his remarks, he celebrated that this facility will be unique from many other buildings that have been built with state funds.

“This is a joyous day,” Governor Bryant said. “This is a building that the government is building that will actually generate revenue; quite different than what we often do.”

The Governor discussed how the memories of the old Trade Mart will persist, but the new space represents a new generation of economic development for the fairgrounds.

During the ceremony, Smith said that the Fairgrounds attract thousands of people from across Mississippi and the country, and that it is one of the state’s largest economic hubs. Smith mentioned that one of her biggest goals as commissioner was to update the fairgrounds and the new $30 million Trade Mart will be an integral part of that goal.

Speaker of the House Philip Gunn thanked the legislature in his speech for appropriating the funds for the new facility. As he grew up in Jackson area, Gunn discussed the countless events that he has seen on the fairgrounds and the events that will gravitate to the area in the future.

“So many of the things that occur here benefit all of us, it is a regional destination. Because of that, we need to make sure that it continues to do what it is doing so well, and that is to provide a tremendous venue for people to come and enjoy themselves, bring their kids and make memories. The creation of this new Trade Mart will serve to do that. This is something that has been needed for a long, long time,” Gunn said.

While the new facility will benefit the entire state, the most noticeable impact will be seen in Downtown Jackson. Mayor of Mississippi’s capital city, Chokwe Lumumba was on hand, and said that this another step in the development of Jackson.

The Mayor continued to discuss the impact that the recent boom of development could have on the city seeking to attract new events and visitors.

“When we are competing with the Mobiles or Birminghams, this is another facility that we can accommodate the needs of conventions, and whatever type of event is taking place. It gives us another space for concerts and a number of events, so we are excited,” Lumumba said.

Governor Bryant concurred and said as “one of the few people that live” on Capitol street, this is a piece in bringing visitors to Jackson and that the revitalization of the Downtown area will continue.

While each speaker at the event praised Commissioner Smith for her efforts in getting this project going, she was quick to deflect the praise back to all of those involved.

The collaboration between state, county and city government was absolutely wonderful,” she said. “To work together so well, and to know that it is going to benefit each other, it’s really nice to look back and see from the Governor down to everyone else, it just flowed. We had connection and we had everyone focused on doing something together.”

The ground for new Trade Mart was broken day, and construction will officially begin on March 19. Construction is expected to be completed in an 18-month period, according to the commissioner.

The new Trade Mart was designed by Wier Boerner Allin Architecture, with  Fountain Construction as the general contractor. The current Trade Mart will continue to operate during the construction process. The current plan for the existing building is that it will be torn down after the completion of the new facility.