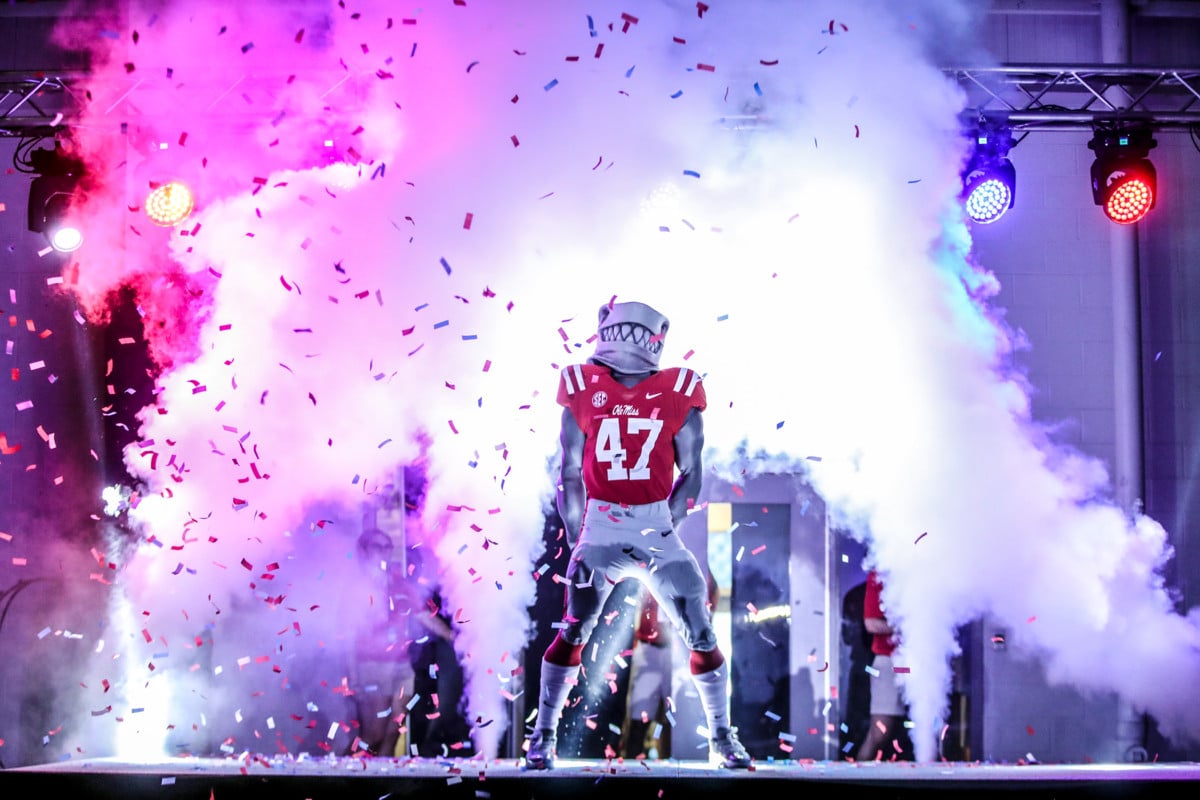 2018 Meet The Rebels in the Manning Center on the campus of the University of Mississippi. Photo by Joshua McCoy/Ole Miss Athletics Instagram and Twitter: @OleMissPix Buy Photos at RebelWallArt.com

2018 Meet The Rebels in the Manning Center on the campus of the University of Mississippi. Photo by Joshua McCoy/Ole Miss Athletics Instagram and Twitter: @OleMissPix

Back in October 2017, Ole Miss announced the adoption of the ‘Landshark’ as their new on-field-mascot, and now, ‘Tony’ the Landshark has been introduced.

The new mascot was unveiled in front of a crowd at Saturday’s “Meet The Rebels” event on the Ole Miss campus, and he will now replace the short-lived Rebel Black Bear at all athletic events. The gesture became a fixture within Ole Miss athletics after former Rebel Tony Fein threw the gesture up for the first time against LSU back in 2008.

Fein, an army veteran, passed away in 2009, but the Landshark lived on at Ole Miss. The symbol has now made its way to every sport on campus and it has gained popularity among the entire Ole Miss community.

As for the new mascot, reactions have been split. While some continue to call for the return of Colonel Reb, others welcome the change from the Black Bear. The debate has continued on all social media outlets, with contributions from many fanbases.

Some say that the change makes perfect sense.

One woman wrote that the new mascot is enough for her to stop supporting the Rebels after four decades.

“I am a true fan and I have been one for 40 plus years, this shark is so ugly and I will not support Ole Miss anymore after this year,” she wrote.

Others urged fans to realize that there’s more to football than mascots.

In the 10-month time frame after the vote, university leaders teamed up with Hollywood costume designers to create Tony, and Micah Ginn, Associate A.D. for Sports Productions and Creative Services, thinks they hit their mark.

”In 2008, Fins Up was born, but after a few years it became part of every sport, every fan, every experience,” Ginn said. “It became second only to Hotty Toddy in terms of greetings between Ole Miss folks.

“Today’s unveiling is the culmination of a lot of thought and a lot of preparation and a lot of scrutiny of what we were trying to accomplish, and I really feel like we landed exactly where we were hoping to land.”

The Landshark will make his sideline debut when the Rebels travel to Houston for their season opener against Texas Tech on September 1st.