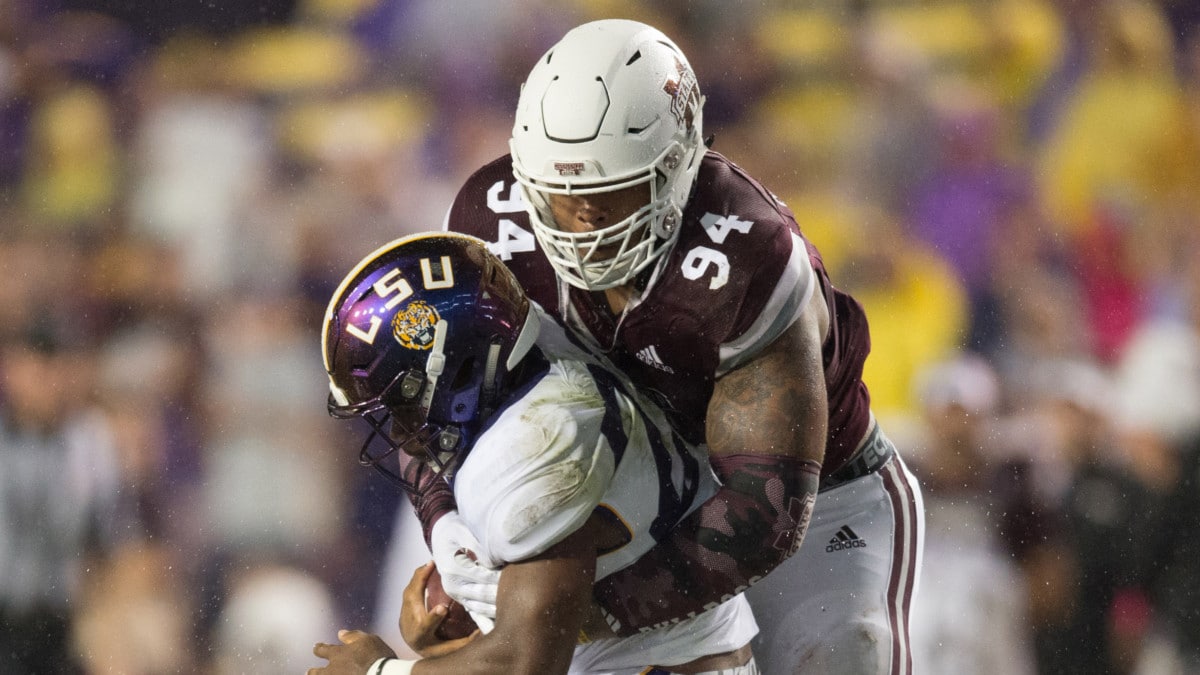 The first 32 picks of the NFL Draft have been made, and three of them were former Mississippi State Bulldogs – a first in school history.

Going into the night, three Bulldogs were projected to be taken in the first round, but the order in which they would be taken was anyone’s guess.

At #19 to the Tennessee Titans, DT Jeffery Simmons became the first Bulldog off the board despite tearing his ACL in February. According to the Titans, Simmons’ rehab is going “great” and he should start running again in 2 to 3 weeks. Simmons said that he expects to play in 2019.

Simmons often fought through double teams during his Mississippi State career, but with his size and speed, he was able to amass 157 tackles, 7 sacks and 4 forced fumbles. Titans General Manager Jon Robinson spoke about the pick and said that they couldn’t pass up a player with Simmons’ skillset.

“I’m just really excited about the ability that he has. He has really good quickness, can really run for a big man. He is explosive, changes direction well. He finishes plays, and he is an aggressive player,” he said.

Simmons’ off-the-field past has also come into question throughout the pre-draft process after he pled guilty to a simple assault charge after he was seen on video striking a woman before enrolling at Mississippi State.

Simmons was extremely honest about this video and what led to it. The explanation was he was protecting his sister after a verbal assault that was as bad as can be imagined. It does not excuse anything. But teams felt comfortable with the player. https://t.co/gjuPhd4k1i

Next up was Montez Sweat at #26 to the Washington Redskins. Sweat’s historic performance at the combine had him flying up draft boards, but reports of a heart condition may have dropped him back down a bit. Hours before the draft, however, new reports surfaced that Sweat may have been misdiagnosed.

From our NFL pre-draft coverage: #MSU pass-rusher Montez Sweat may have been misdiagnosed with hypertrophic cardiomyopathy. Two sources say the thickness of Sweat’s heart wall is actually 1.5 cms, not nearly 2.0. I explain below why the risk could be much lower. pic.twitter.com/PUVsbO2tDw

The Redskins had already drafted QB Dwayne Haskins at #15, and they traded back into the first round to grab Sweat, one of the premier pass rushers in the draft class.

For the last two seasons, the DE led the Bulldogs in sacks and was among the leaders in the SEC. In just two seasons with the Bulldogs after being dismissed from Michigan State, Sweat totaled 22.5 sacks. In his senior season, he earned multiple first-team All-America honors and was a semifinalist for the Bednarik Award, given annually to the nation’s top defensive player.

With their third first-round pick of the night, the Raiders selected S Johnathan Abram. Before the draft, Abram called himself the best trash-talker in the class, and his new head coach Jon Gruden is the perfect coach for that as shown in a behind the scenes clip from the Raiders war room.

“I knew you were gonna call me. You know I wanna be a Raider.”@JohnathanAbram1 is fired up to be headed west. pic.twitter.com/zb5i6rogMe

For Ole Miss, the first round came and went without a selection. WR D.K. Metcalf was at the draft, but two receivers were selected ahead of him including Oklahoma’s Marquise Brown (Ravens #25) and Arizona State’s N’Keal Harry (Patriots #32).

Metcalf and fellow Rebel WR A.J. Brown will likely be picked early in the 2nd round. LT Greg Little may also hear his name called tonight.

For Mississippi State C Elgton Jenkins will probably be the next name off the board, and players like CB Jamal Peters, S Mark McLaurin and QB Nick Fitzgerald will have to wait a little longer.