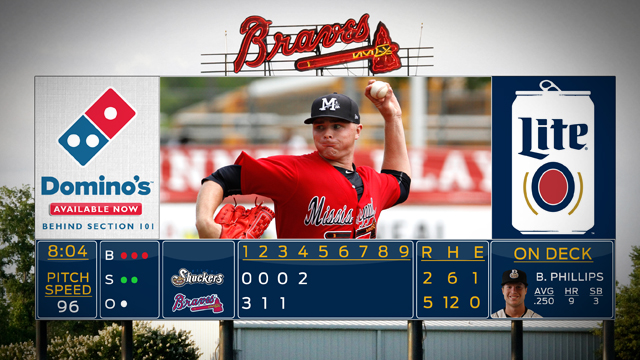 The first pitch of the Mississippi Braves’ 2017 season will be thrown on Thursday night, April 6, in Pearl at their home stadium.

The MBraves play the Jacksonville Jumbo Shrimp at 7:00 p.m. for the first Thirsty Thursday of the year. It’s also ALS Night, amyotrophic lateral sclerosis or Lou Gehrig’s Disease, and they’ll bring awareness to the illness.

The team announced their opening day roster, which included four of the Atlanta Braves top 10 prospects; Kolby Allard (3), Mike Soroka (4), Patrick Weigel (9) and Max Fried (10). The team has six first-round draft picks, eight players were members of the 2016 South Atlantic League Champion Rome Braves and 16 players were members of the Mississippi club that made the Southern League playoffs last year.

It isn’t too late to get season tickets for the MBraves games. All you have to do is go to their website  to place your order, or head to Will Call and you can pick them up there.

Not up for a full season of tickets you can get individual game tickets online or at Will Call.

The Braves will also be giving away some magnetic schedules for the first 5,000 fans that walk through the gates.

For a full schedule of the MBraves season visit HERE.

Down on the coast the Biloxi Shuckers are getting ready to knock one out of the part tonight. At the MGM Park on the coast, fans will notice many familiar names on the preliminary roster, including 18 players who have previously worn a Shuckers uniform. Brewers 40-man roster occupants Jorge Lopez and Michael Reed are among those returning to Biloxi, and fellow 40-man member Taylor Williams will make his Shuckers debut after missing 2015 and 2016 to injury.

You can purchase season tickets HERE or at Will Call at MGM Park.

The game starts tonight at 7:00 p.m. against the Pensacola Blue Wahoo’s in Montgomery.