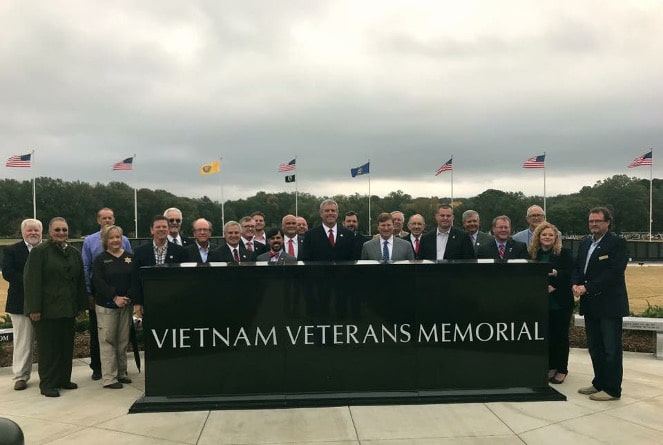 A dream has become a reality for a small group of veterans as the city of Tupelo dedicated a replica of the Vietnam war memorial in Washington, D.C.

It all started back in 2011 when a small group of veterans and patriots came together to try to honor the service of vietnam vets.

Mayor Jason Shelton praised the work of the small committee led by Janie Alexander and Barbara Rushing, who initially approached the City of Tupelo about placing the replica wall at Veterans Memorial Park.

After receiving a resounding “yes” from the Jack Reed, Jr. administration and the City Council at the time, the committee raised $200,000 in donations from private sources.

Then, the city stepped in to help in 2013 with $150,000 that helped to pave the parking lot and build the infrastructure, but it still wasn’t enough.

In 2013 when Shelton’s administration started and learned of the project’s history, the current City Council again said, ‘yes,’ and the city allocated $150,000 to pave the parking lot and build the infrastructure.

In addition, city officials began to talk to local legislators, who as a delegation went to Jackson and fought for the regional project that saw $750,000 in state funds to make the dream a reality.

“Like most states, in Mississippi, for any Legislation to pass, it must have the support of the Governor, Lieutenant Governor and Speaker of the House,” said Shelton at the dedication. “We are here today because these outstanding leaders for our great state also said, ‘yes’ to honoring our veterans here in Tupelo.

Lt. Gov. Tate Reeves and Speaker Philip Gunn both praised the public and private partnership. However, this day was for the veterans. “Thank you for your service,” said Reeves as he recognized those Vietnam-era veterans in the audience.

The dedication was attended by more than 1,500 veterans, their families and others, the dedication celebrated the success of the committee that set out to see the memorial a reality and recognized the sacrifices of those killed in action and those still missing in action.

The monument is located in Veterans Memorial Park in Tupelo.