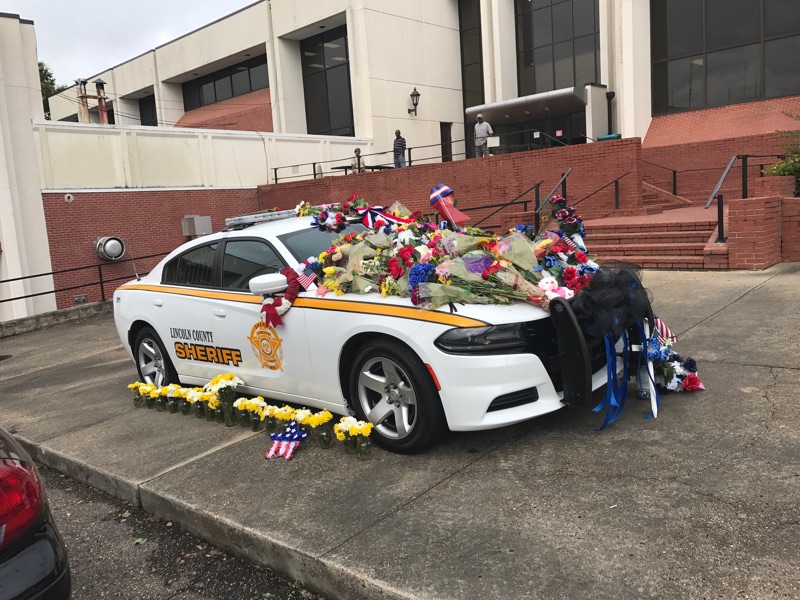 The community is continuing to pick up the pieces after Saturday night’s deadly shooting rampage in Lincoln County.

Willie Cory Godbolt was shot during the pursuit early Sunday morning. He was taken to the hospital for treatment and has been released Tuesday morning to authorities.

Eight people were killed. Godbolt has been charged with one count of capital murder and seven counts of first degree murder.

Seven of those were Godbolt’s relatives. The other was Lincoln County Deputy William Durr. He was killed at the first crime scene, at 2871 Lee Drive in Bogue Chitto .

“He loved his job, he loved his family,” said Lincoln County Sheriff Steve Rushing. “He’s an all around great guy.” He was a two year veteran of the Lincoln County Sheriff’s Department. Before that, he served four years at the Brookhaven Police Department. In his off time, Durr was a ventriloquist, leading his church puppet team for children. “He loved working with kids,” said Sheriff Rushing. “We just had him trained up with DARE to work with kids in schools in the fall…anytime he saw kids he wanted to talk to them.”

A memorial fund has been set up in his honor. His patrol car has also been parked in front of the Sheriff’s Department as a memorial.

Rushing said that Durr’s death in the field is a harsh nightmare many law enforcement officers face. “You never know at the end of your shift if you’re coming home or not,” said Rushing.

“We now know the officer who lost his life in Lincoln County is Sheriff’s Deputy William Durr, a father and husband who gave his life to protect and serve,” said Governor Bryant. “May God rest his eternal soul and assuage the pain of his family and fellow officers.”

Gov. Bryant also asked for the entire state to rally around the family of the 8 victims.

“I ask all Mississippians to join Deborah and me in praying for those lost in Lincoln County. Every day, the men and women who wear the badge make some measure of sacrifice to protect and serve their communities. Too often, we lose one of our finest. I thank the law enforcement agencies involved for their hard work. May the peace of the Almighty wash over those hurting after this senseless tragedy.”

Durr died in the line of duty, but he is not the only hero being remembered in this tragic event.

17 year-old Jordan Blackwell found himself in one of the homes (1658 Coopertown Road in Brookhaven). As family members were shot at and rushed to clear the home, Blackwell saw his younger cousin, Caleb Edwards, nearby.

Blackwell shielded Caleb’s body with his own, and was killed in the process.

Blackwell was a football player at Brookhaven High School. This fall, he would have been a senior, and had scholarships lined up.

6 others were killed in Saturday’s shooting:

News Mississippi will continue to cover this story.