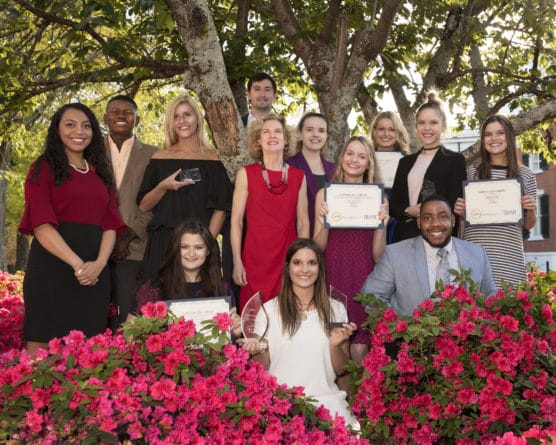 University of Mississippi public relations students and recent graduates swept the awards in the Public Relations Association of Mississippi (PRAM) student competition, with one student winning overall Best in Show.

Only 14 total students from around the state won awards, and students from the UM Meek School of Journalism and New Media won 12 of those. Senior Public Relations lecturer Robin Street said this is the second time her students have won 12 of the 14 awards given each year.

In addition, a 30-member student committee led by senior lecturer Robin Street won an award of excellence in the professional category for the anti-stereotyping campaign called It Starts with (Me)ek, which they created for the school asked students to pause for a moment and think before they stereotype someone.

“It might be because of that person’s race, or gender, or sexual orientation, or religion, or mental health status,” Street said. “We are all guilty to some degree of stereotyping other people when we make a quick judgment when we meet someone.”

The awards were presented April 13 at the PRAM state conference in Starkville.

“Entries submitted by students from the University of Mississippi highlighted their extraordinary skills, and I have no doubt that each of these students will be successful as a public relations professional,” said Christen Duhé, PRAM’s vice president of awards. “Their level of professionalism is very impressive.”

“I already knew how outstanding these students are, but I was delighted that the judges recognized that also,” Street said. “Our students demonstrated that they excel in the diverse set of skills needed in today’s public relations profession. That is a tribute to the preparation they received from all the faculty members at the Meek School.”

In addition to the PRAM awards, Street said the It Starts with (Me)ek campaign has also been chosen as a finalist for the Silver Anvil award given by the Public Relations Society of America which Street says is the equivalent of an Oscar in the PR industry.

“The It Starts with (Me)ek campaign was done by 30 students on a team that I led and we entered that in the professional category, not the student category,” Street said. “The fact that we were recognized with an award of excellence from PRAM and a Silver Anvil finalist from PRSA speaks so highly of what our students are capable of doing.”

The PRAM awards are given at three levels, based on the number of points judges award each entry. The top award is the Prism, followed by the Excellence and Merit awards. Multiple students can win in the same category if they earn the required number of points. The entry with the highest number of points is named Best in Show.

Addie Guida, a public policy major and journalism minor from Gulfport, won Student Best in Show and the Prism in her category. The judges, who remain anonymous, praised her work highly.

“This campaign is planned extraordinarily well,” one judge wrote on Guida’s entry. “I was incredibly impressed by the level of detail provided. It’s clear a lot of time and effort went into this work, and it’s a shining example of a well-developed integrated communications plan.”

Dixie McPherson, a May 2017 graduate in integrated marketing communications from Tupelo, also won a Prism award. The judge’s comment on her entry read, “Perfect! This is how it’s done.”