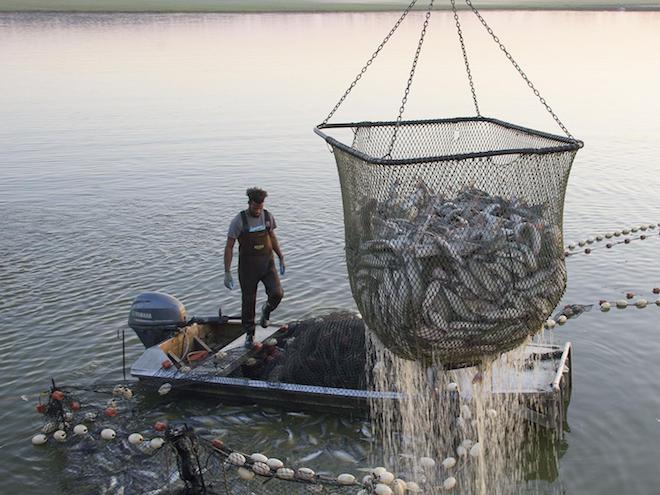 Dr. Kelly Lucas, Director of The University of Southern Mississippi’s Thad Cochran Marine Aquaculture Center, spoke in Washington recently on the importance of aquaculture in the United States.

“The United States imports over 90% of our seafood and half the imports are aquaculture products,” Lucas told the U.S. Senate Committee on Commerce, Science and Transportation. “We have a $14 billion-dollar seafood trade deficit. With a growing demand for seafood and static wild capture fisheries since the 1990s, aquaculture must continue to grow to meet increasing demand.”

U.S. Sen. John Thune oversaw the hearing titled, “Growing the Future: Opportunities to Support Domestic Seafood Through Aquaculture.” The members examined the current state of aquaculture in the United States, future opportunities for offshore, coastal, and inland communities, and the potential impact on the economy.

“Domestic farming of seafood, done in a safe, well-monitored manner, can provide economic opportunities for all Americans, both for our coastal and inland communities, Thune said. “Agricultural states like mine (South Dakota) can play an important role in providing feed for fish farms, and everyone benefits from having increased domestic seafood production.”

The Thad Cochran Marine Aquaculture Center in Ocean Springs includes approximately 100,000 square feet of culture space devoted to environmentally responsible and economically feasible marine aquaculture. Lucas’ team’s research focuses on alleviating the bottlenecks that constrain the production of marine species. Before arriving at USM’s School of Ocean Science and Technology, Lucas was the chief scientific officer for the Mississippi Department of Marine Resources.

“The University of Southern Mississippi is investing heavily in marine aquaculture. Our scientists are employing cutting-edge technology and the best research practices to grow fish in an environmentally responsible and economically feasible manner,” said Gordon Cannon, Vice-President for Research. “We are proud to have such experienced aquaculture researchers as Dr. Lucas and many others who have earned national and international reputations for their research and development of sustainable marine aquaculture technologies. This is just one example of Southern Miss’ involvement in shaping the economy of our state.”

Sen. Thune said that instead of continuing to buy seafood from a global market, which has seen repeated instances of labor and environmental violations, we should do a better job at home.

“Aquaculture is the fastest growing food industry in the world,” said Thune. “If encouraged in the United States, it has the potential to create jobs and boost the economy, from states like South Dakota to the coasts. Let’s harness this opportunity and become the world leader in safe and sustainable domestic seafood production.”

Throughout Lucas’ testimony, she highlighted both opportunities and challenges the U.S. faces in growing domestic aquaculture. Challenges such as fish-feed production, net and cage technology, and continued research were presented to the committee.

“I believe the time is now for the United States to become more self-reliant in the production of seafood,” said Lucas. “It was a privilege to testify before the Commerce Committee regarding exciting opportunities to increase production of US seafood.”