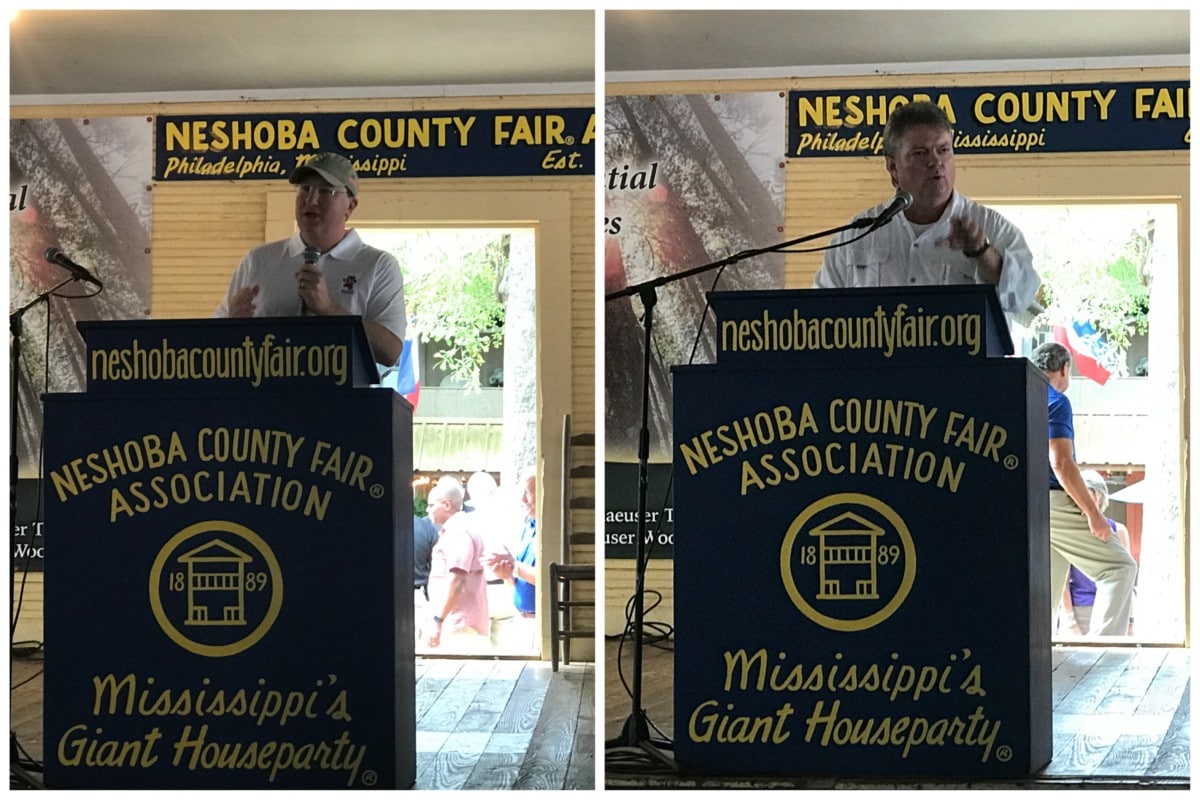 The Neshoba County fair is famous for family, food, fun and of course the political speeches at the fair. All eyes were on Attorney General Jim Hood and Lieutenant Governor Tate Reeves, Wednesday as they took jabs at one another ahead of what many believe to be a preview of the upcoming 2019 Gubernatorial election.

During his speech to the packed crowd in the pavilion, Attorney General Jim Hood highlighted his frustrations with the legislature and the Republican leadership in Mississippi.

“In the past 14 years, our office has brought in about $3 billion dollars. You know, give or take a few million dollars here and there, I guess its enough to pave somebody’s driveway, apparently that’s what the legislature has done,” Hood said. “It’s funny, as soon as I bring in some money, they are ready to huddle up down there and take credit for it. You’d think they had gone down to the Supreme Court and actually won those cases themselves and had an impact.”

People showing up as @AGJimHood speaks at the #NeshobaCountyFair2018 and takes shots at Lt. Gov. @tatereeves pic.twitter.com/7zc6IlwW9y

Hood added that there are major problems in the state like the “brain drain” which Hood says, in the last six years, is worse in Mississippi than in any other state.

“In order to pay it, [tuition and student loans] they have to get a job and they have to leave our state,” Hood said. “Our best and brightest are leaving because they don’t have jobs that can pay off their student debt.”

“I’m already seeing the undercurrents of change happening in Mississippi,” Hood said. “Mainstreet merchants, builders, road contractors, doctors, hospitals, county boards of supervisors, people that work in the courthouses, you are seeing those blocks of people move our state in the right direction… I invite you to join me if you are tired of self-dealing and partisan bickering and yapping, let’s work together to move our state forward.”

Lieutenant Governor Tate Reeves took the stage soon after Hood and started off by thanking Congressman Gregg Harper for his years of service in Washington, D.C. and began touting the gains that Mississippi has seen in recent years citing the success of Governor Phil Bryant and Republican leadership.

“Our policies are overcoming nearly 150 years of Democrat rule in Mississippi,” Reeves said. “When I first asked to be your Lt. Gov. I shared my fundamental beliefs on how to grow our economy. First, we must have a fiscally responsible government. Now, we have a balanced budget, nearly $350 million set aside for a rainy day and will end our eight-year run with less debt on the books than when we started.”

He also praised Mississippi school administrators and teachers for their work to improve student progress. Through innovative reforms and investment in the classroom, including more than $350 million more spent on teacher pay over the past four years, the state’s educational outlook is strong.

“Meaningful education outcomes that strengthen our workforce for generations don’t come easy,” Lt. Gov. Reeves said. “But by building on the achievements we’re seeing today, our people will be ready for the high-tech, high-skilled jobs of tomorrow. Now you won’t hear about these good things if you just listen to the status-quo Democrats in Jackson,” Reeves said. Because just as we’re making progress balancing the budget, lowering taxes and seeing real education reforms making a difference in kids lives, liberals want to let off the gas. They’re calling on their friends from Hollywood to Washington to help them stop our progress with the same passion they’re using to fight President Trump.”

He questioned why Attorney General Jim Hood has not signed onto a letter supporting President Trump’s nominee to the U.S. Supreme Court, Brett Kavanaugh.

“Democrats don’t like that President Trump will have the ability to appoint two Supreme Court justices – putting Mississippi even closer to our goal of being the safest place in America for an unborn child,” said Reeves.

Reeves brought the attention back to the upcoming Gubernatorial election saying that if Jim Hood decides to run for a different office, the Office of the Attorney General would be better off.

Lieutenant Governor @tatereeves rounding out the speeches today at the #NeshobaCountyFair2018 discussing recent “attacks” on him from democrats and “liberal friends in the media.” pic.twitter.com/5Hly5TysYt

“Honestly, I have been itching for the election season to start,” Reeves said. “Our Attorney General seems to be a man of growing ambition if his ambition causes him to leave the Attorney General’s office to be replaced by a lawyer that is focused on liberty instead of litigation then Mississippi will be better off for it.”

Reeves said that he is willing to make enemies in order to protect the taxpayers.

“The very first time I stood on this stage, I said I would be a watchdog for the taxpayers and I have held true to that every day since,” Reeves said. “We are going to keep draining the swamp, and that means that some so-called Republicans might get caught up in it. Because I believe that Mississippians deserve elected leaders who are not afraid to stand up for what our people want, or in the case of raising taxes, what our people don’t want.”