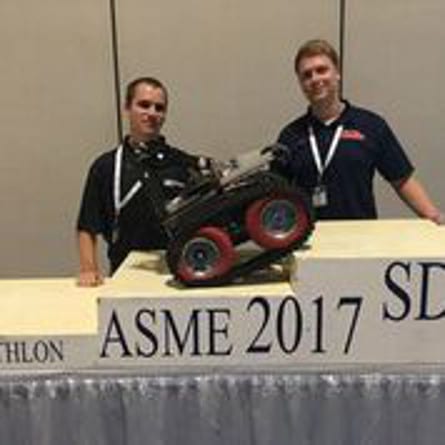 The 2017 American Society of Mechanical Engineers Student Design Competition (The Robot Pentathlon: Citius, Altius, Ingenious) challenged each team to create a fast, strong and agile robot. Each team was also expected to build a device to remotely control its robot and compete against others in five different events – a robot pentathlon.

The competition is based on design requirements and a set of rules that change annually. This year, the requirement was to design a robot that could accomplish five objectives: a 10-meter sprint, a stair climb, a tennis ball throw, a golf ball hit and a weight lift.

“Ole Miss had two teams that not only won first and second place in the regional competition in Tennessee but also those teams went on to win second and third place in the finals, which included teams from around the world,” said Arunachalam Rajendran, chair and professor of mechanical engineering, who accompanied the teams.

The original regional competition, held at Tennessee Tech in Cookeville, Tennessee, last April, included such universities as Virginia Tech, Clemson University, the University of Illinois at Urbana-Champaign and several SEC universities. After their victory, the UM students graduated and began their careers. However, the robots they left were eligible to compete in the international competition in mid-November.

“After the competition was completed, the first-place award went to the Indian Institute of Technology Bombay, second went to the Ole Miss Red team with Ryan Steele of Southaven and Turner Wharton of Fairfax, Virginia, and third went to the Ole Miss Blue team with Jonathan Brown of Ecru and Eli Schuette of Ocean Springs,” Rajendran said. “Overall, the Ole Miss students won $1,500 in prizes, plus an additional $750 to the ASME student group on campus.”

Matt Lowe, the machine shop supervisor in UM’s mechanical engineering department, said the teams can be very proud of their placements in the competition.

“They took a cost-effective approach to complete a very engineering-effective design,” Lowe said. “For example, the manufacturing cost for the Ole Miss robot was less than $500, and it outperformed a robot from a rival institution that costs more than 10 times as much to create.”

Rajendran added that the entire process was a group effort.

“We couldn’t have won the top two places without the hard work and dedication of the machine shop supervisor, Mr. Matt Lowe,” Rajendran said. “The team members worked very hard under the supervision of Mr. Lowe and utilized all resources in our machine shop for exceptional cost savings. I am so proud of them all.”

The ASME competition provides a platform for engineering students to present solutions to design problems ranging from everyday household tasks to groundbreaking space exploration. Each team is required to design, construct and operate a prototype that meets the requirements of an annually determined problem statement.

“This experience not only allowed students to learn more about robotics, design, and engineering, but it also showed engineers from around the world the fantastic capabilities that Ole Miss has in engineering,” Rajendran said.

“This not only shows the amazing growth and engagement that Ole Miss engineering has had in recent years, but it is also a testament to the opportunities that are possible with incredible faculty support,” Rajendran said.

Photos courtesy of the University of Mississippi: 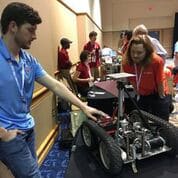 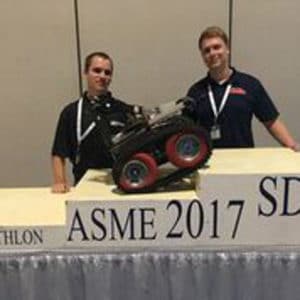 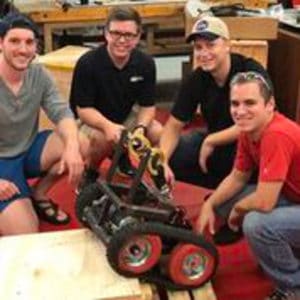