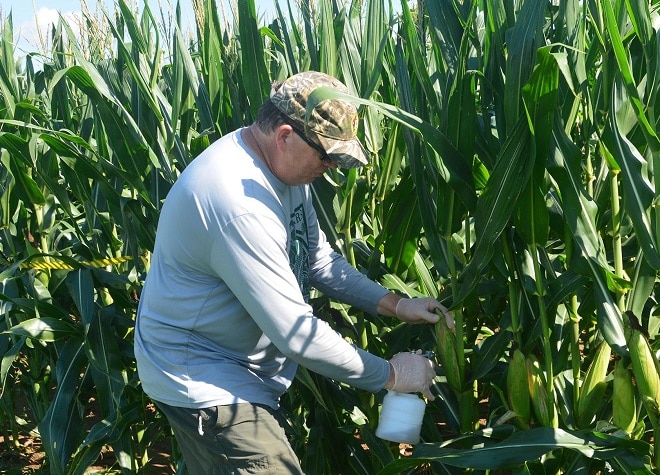 Early or not, Mississippi’s corn crop is well on the way to its best yield in years, barring any major disasters.

Erick Larson has spent more than two decades as the Mississippi State University Extension Service corn specialist. Larson said 2017 weather generally has been better than he can remember for any past growing season. Timely rains in some areas and cool nights during the crucial early grain-filling periods were important keys.

“Nighttime temperatures are the most critical environmental factor during the early reproductive stages,” Larson said. “In recent years, we have been 2 to 3.5 degrees above normal. But this year, we were about 1 degree below normal. That’s enough to make a favorable difference.”

Larson said he sees promise for strong yields in dryland corn as well as irrigated fields.

“Typically, dryland yields are 30-40 percent less than yields found in irrigated fields,” he said. “Some growers with irrigated fields have not even needed to turn on their wells this summer. Normal corn fields may receive five or six irrigation cycles before the growing season is finished, so those growers should save significantly on the crop’s cost of production.”

Larson said Mississippi’s corn benefitted from much better planting conditions than in the last four seasons. Growers planted most of the state’s corn from March 20 through mid-April, which is an ideal time. The crop germinated quickly and established uniform stands, which are critical for high corn productivity.

“We generally had drier than normal weather in March, April and May, allowing for effective nitrogen fertilizer applications, weed control and deep root system development in most of the state,” he said.

Dennis Reginelli, an area Extension agent based in Oktibbeha County, said corn in the heavy soils of east Mississippi has had more than enough rain.

“The challenge has been the excessive rains during the early growing season resulting in a shallow root system,” he said. “We have not had to worry about heat or drought stress, but once the fields start missing rains, they will suffer more quickly.”

When the corn crop reaches maturity, grain development is finished and the crop dies. Beyond that point, the weather is not a factor in crop development. Weather may affect harvest, but the hot, dry weather common in August is favorable for corn harvest. The forecast for upcoming yields has a significant impact on market prices.

“After a couple of strong weeks, corn and soybean prices are both down the middle week of July,” Williams said. “The report indicated supplies are larger and feed use is lower than anticipated. That directly impacted corn, and soybean prices followed lower.”

“Lower feed use last year increased carryover, and this year, growers planted more corn acreage than expected, although acreage is still less than last year,” Williams said. “Prices in the next few months will largely depend on weather in the Corn Belt. Fewer acres than in 2016 should help, but we still have to overcome large stocks to see much upside.”