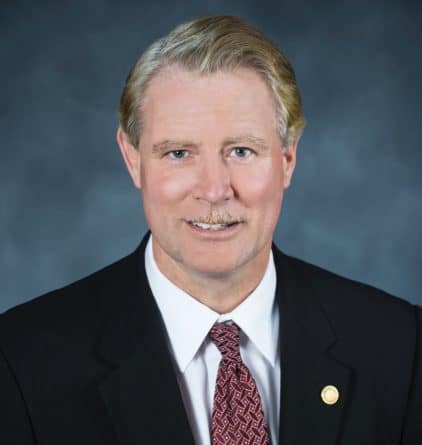 Commissioner of Higher Education Dr. Glenn Boyce has announced his intention to retire at the end of June. Boyce was named Commissioner in April of 2015 and has enjoyed an expansive career in secondary and post-secondary education.

“It has been a blessing to spend my life as an educator, and looking back on it, I would not have traded my chosen field for any other,” said Dr. Boyce.  “The experience of working with and besides wonderful people to help students fulfill their dreams through education has given me an extremely rewarding career. After 37 years, it is finally time to pursue the dreams my wife and I put on hold while building careers and raising a family.”

“I have had the pleasure of serving with an amazing group of IHL Trustees,” said Dr. Boyce. “I will always cherish the relationships we shared. They serve the state with such a selfless attitude and give of their time endlessly to help students succeed. They are all in on their commitment to moving the state forward and I appreciate their steadfast support for me and their unwavering dedication to the system.”

“Dr. Boyce has provided tremendous leadership for the university system,” said Trustee C.D. Smith, President of the Board of Trustees of State Institutions of Higher Learning. “He understands the needs of our students and our state and has worked tirelessly to ensure that the university system addresses both in our rapidly-changing world.”

Under his leadership, the university system has set record enrollments, has seen record numbers of degrees awarded, launched a statewide program to increase the number of degree holders in the state exponentially, worked to be more responsive to the needs of business and industry, and has streamlined operations to increase efficiencies.

In Academic Year 2017, there were 95,857 total students enrolled in the university system. The universities awarded 17,760 degrees in 2017, representing an 8.9 percent increase in the past five years. The number of science, technology, engineering, and mathematics (STEM) graduates has increased by 37.9 percent in that timeframe. In 2017, there were 3,727 STEM graduates and 2,849 healthcare graduates, including nurses.

A collaborative effort between the university and community college systems, Complete 2 Compete (C2C) is a statewide program focused on encouraging Mississippi adults who have completed some college, but no degree, to return to college and complete the requirements necessary to earn their degrees. Since launching the C2C website in August, there have been almost 24,000 visits to the website and almost 7,000 applications submitted. There have been 261 associates and bachelor’s degrees awarded through the program.

Prior to being named Commissioner, Dr. Boyce served as Associate Commissioner of Academic Affairs for the Institutions of Higher Learning. He joined IHL after serving as President of Holmes Community College for more than nine years.

Dr. Boyce served for several years as Co-Chair of the Education Achievement Council, working collaboratively with all levels of education, state leaders and the business community to increase educational attainment in the state. Dr. Boyce served as a trustee for the Southern Association of Colleges and Schools Commission on Colleges, the regional body for the accreditation of degree-granting higher education institutions in the Southern states. He also serves on the Board of Directors of the Mississippi Commission on College Accreditation.