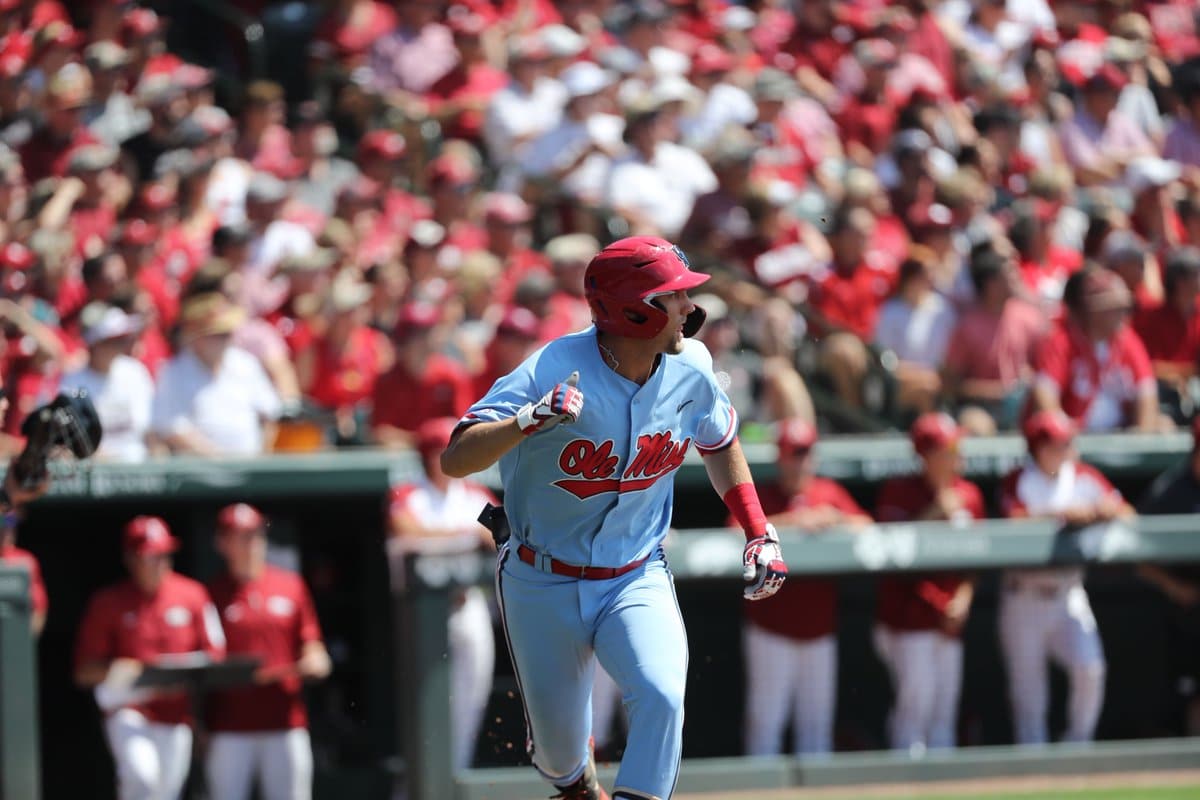 FAYETTEVILLE, AR — The result punctiliously mirrored the performance of the two starting pitchers.

Ole Miss was throttled in an 11-2 loss to Arkansas on Saturday in a game in which Will Ethridge faltered and Razorback starter Isaiah Campbell thrived.

Ethridge’s fastball was flat. His command was erratic and he hung a couple of costly mistakes. Arkansas plated four runs in the first, two more in the second and three in a fourth inning Ethridge would not see the end of.

The trouble began shortly after Ethridge hurled his first pitch. He offered eight consecutive fastballs to leadoff hitter Trevor Ezell, who cracked a double down the left field line. Casey Martin followed with a single on a 1-2 fastball on the inner half, a pitch that usually yields favorable results for Ethridge. Matt Goodheart missed a three-run shot by a couple feet as the ball drifted to the wrong side of the left field foul pole. Ethridge struck Goodheart out two pitches later to record his first out, but further misfortune loomed. Dominic Fletcher struck an RBI single up the middle and two batters later, Jack Kenley pummeled a hanging breaking ball for a two-out, three-run home run.

“They just swung it well,” Ethridge said. “They hit each pitch that I had very well. I wasn’t able to locate very well.”

The disastrous 45-pitch first inning wiped away an early 1-0 cushion given to Ethridge by Grae Kessinger in the top of the first. Kessinger deposited an Isaiah Campbell fastball over the left field wall for his sixth long ball of the season. Campbell was brilliant after the lone gaffe in game’s second at bat. He turned in 8 1/3 innings of five-hit hit, two-run ball. It was a 102-pitch gem. Campbell did not allow the Rebels to pick themselves up off the mat after being knocked down by the Razorbacks’ early blows.

“We really didn’t threaten the rest of the game,” head coach Mike Bianco said. “I have said it all year. He is a true ace in our league. He has three plus pitches. He uses his fastball on both sides. He will throw in. He will pitch backwards when he needs to. He is just really good. He can be a force out there, especially with a lead.”

Arkansas’ damaging first inning gave Campbell just that: A lead. And was one he never flirted close to surrendering.  His location was pristine and the three-pitch mix he features blended nicely behind his fastball. Campbell struck out seven and walked just one hitter. He retired 14 of the next 15 hitters after Kessinger’s blast. Ole Miss’ only other run came on a solo shot in the ninth inning. Campbell walked off the mound at Baum stadium one final time to a thunderous ovation.

The Razorbacks did to Ethridge what Ole Miss needed to do to Campbell. They spiked Ethridge’s pitch count early. Fletcher’s RBI single was an eight-pitch at-bat, as was Ezell’s leadoff double. The junior right-hander’s command was erratic and Arkansas punished his mistakes. But Ethridge also threw good pitches that got hit. He was facing an elite lineup that slugged 81 home runs with an .887 OPS this season and Arkansas proved why they are worthy of such a title.

“Two things that I think happened are when you watch that first inning, there were two great at-bats by Ezell and Martin,” Bianco said. “Ezell ran a full count and popped a double down the left field line. Martin gets two strikes on him and gets to Will’s fastball inside. Not a lot of guys can do that.”

Ole Miss is now facing elimination. It has been in a similar spot before in the same stadium. The Rebels took two of three games from Arkansas in March, back-ending the series after Campbell bested them on a frustrating Friday evening. Doug Nikhazy will start for Ole Miss. Arkansas will throw right-hander Connor Noland, whom the Rebels have already seen twice this year, most recently at the SEC Tournament two weeks ago. Nikhazy went 5 2/3 in his first outing against the Razorbacks. He surrendered three runs on five hits with six strikeouts and three walks in a game the Rebels won 4-3.

“We need a great effort from him and get some length,” Bianco said. “One of the things you have to do to compete is put up zeroes. We did not do that today. Hopefully, he can get off to a good start, live in some better counts, make good pitches and put some zeroes up.”

Bianco said this lopsided defeat stung and his team was currently feeling that. He also noted that all loses sting to some degree and that this group is no stranger to playing with their backs against the wall. Ole Miss t has adopted a looser mindset this postseason as it soared to a 9-2 mark in its last 11 games. The pressure will intensify with the club’s season on the line. But the mindset will remain the same.

“This one is over,” Kessinger said. “We have to play one pitch at a time tomorrow. We have to be ready to go and continue to have confidence in one another. If we do that, we will be alright in the end.”

Ethridge struggles, Rebels on brink of elimination after 11-2 loss to Arkansas

Mississippi State Takes Down Stanford 6-2, Now One Win Away From the College World Series