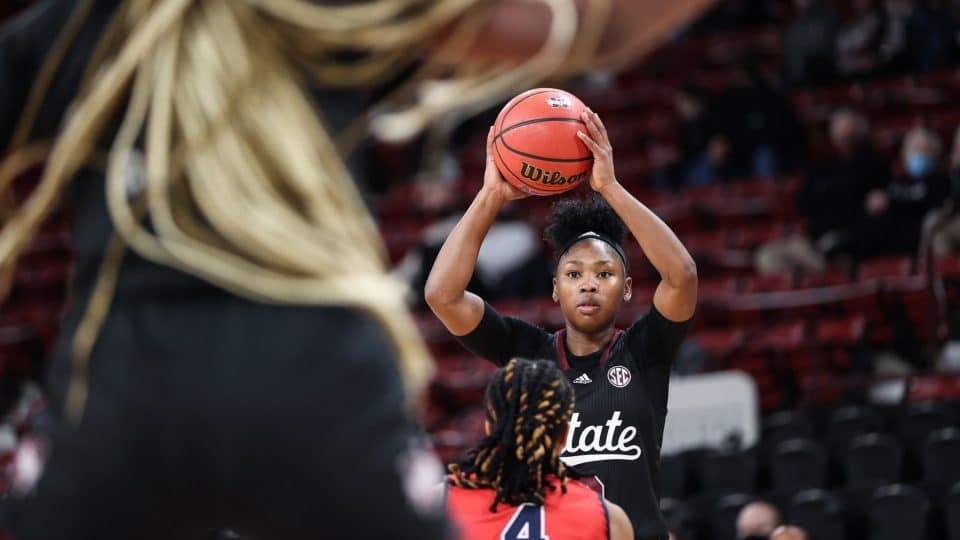 A season ago, the gap between Mississippi State and Ole Miss was wide enough that State took the game in Starkville by 41 points. This season, the Rebels have clearly closed the gap, and the Bulldogs had to battle down to the final buzzer to escape with a 60-56 win over their in-state rivals at the Humphrey Coliseum on Sunday. It was State’s 14th straight win in the series, with the Bulldogs claiming 20 of the last 22 contests.

State got off to a rocky start, and the teams were tied after one period. MSU’s Aliyah Matharu made the difference before halftime, hitting four three pointers, as the Bulldogs took a four point lead into the locker room. State led despite no points from Rickea Jackson, who didn’t get on the scoreboard until 4:40 left in the third quarter. Matharu finished with 16 points, Jessika Carter led the maroon and white with 19 points and 9 rebounds.

Ole Miss had the ball with a chance to tie in the closing seconds, but Donetta Johnson airballed a jump shot, and State collected the miss with 2.6 to go. Johnson led the Rebels with 25 points, followed by Valerie Nesbitt with 18. Ole Miss missed six shots in a row that could have tied the ball game after Johnson cut the State lead to 2 with two free throws at the 3:52 mark.

State improves to 8-2 on the season, 3-1 in SEC play, Ole Miss falls to 7-2 and 1-2 in the conference. The Bulldogs will be back in action Thursday night against Alabama, a home game that tips off at 7 PM.

Thunder & Lightning: Can We Rumble Through The Whole Offseason?