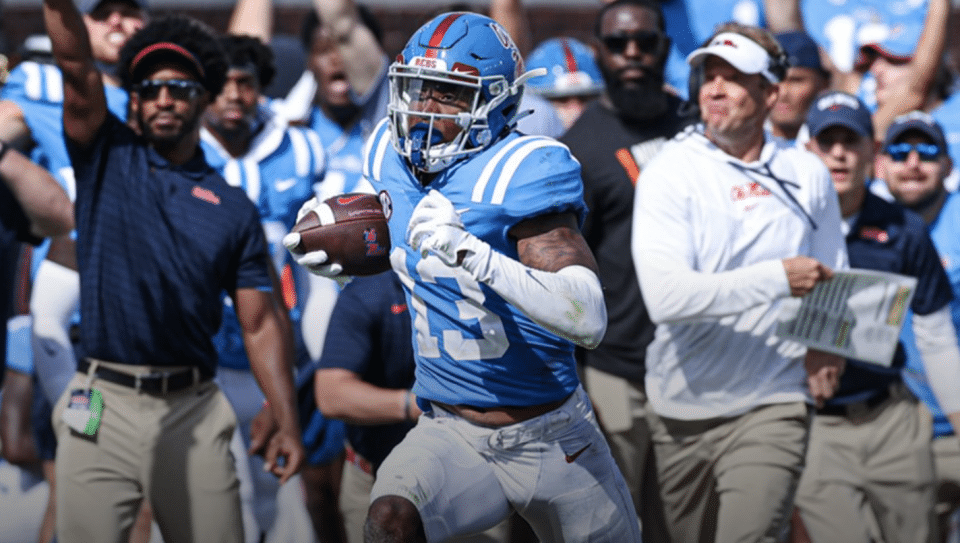 Defensive stops were rare, but the No. 17 Ole Miss Rebels made a final stand when it mattered most, holding firm on a final two-point conversion try to stave off No. 13 Arkansas, 52-51, with no time left on the clock.

The game featured a combined 103 points and 1,287 yards of total offense, but the Rebels (4-1, 1-1 SEC) emerged victorious on that final two-point try after Sam Williams and Tavius Robinson got in the face of Arkansas (4-2, 1-2 SEC) quarterback KJ Jefferson, who overthrew his target in the endzone amid the pressure.

Defensively, Otis Reese led the Rebels with 11 tackles while Keidron Smith and AJ Finley each had 10. Chance Campbell had the only sack of the day, and both he and Smith each had a turnover to their names.

Five of the last seven matchups between the two schools have now been decided by four points or less. Saturday’s top-25 showdown at Vaught-Hemingway Stadium was a second-half barn burner all the way until the final whistle. However, it didn’t start that way.

Both teams traded punts right out of the gate before the Razorbacks used a time consuming 15-play, 82-yard drive to draw first blood. Arkansas quarterback KJ Jefferson (25-of-35, 326 yards, three TD) capped off the run-heavy drive with a touchdown run from five yards out, giving his team a 7-0 lead with 4:17 left in the opening quarter.

Going into the second quarter, the Rebels responded with a long drive of their own, resulting in six. Matt Corral capped off a 17-play drive that featured two fourth down conversions with a five-yard rushing score. However, a failed PAT attempt made it a 7-6 game in Arkansas’ favor, 13:35 left in the second quarter. That was Corral’s seventh rushing touchdown of the season.

The Razorbacks continued to control the line of scrimmage offensively and proceeded to score again on their next drive. Trelon Smith found the end zone from 14 yards out and gave Arkansas a 14-6 lead with 10:32 left in the first half. It only took Ole Miss two plays to respond. Corral found Dontario Drummond all alone on the left side and the two connected for a 67-yard touchdown strike. Corral took in the two-point conversion himself to tie the game at 14 apiece with 9:53 left in the second quarter.

Arkansas proceeded to make their way into Ole Miss territory and looked to answer once again, but a strip and fumble recovery by Chance Campbell gave Ole Miss the football at their own 27-yard line. However, the Rebels went three-and-out offensively and gave the ball back to Arkansas shortly after.

The Razorbacks again made their way into Ole Miss territory and again the Rebel defense came away with a stop. After a field goal by Arkansas’s Cam Little sailed wide right, Corral led the Rebels downfield to give them their first lead of the game. Corral again called his own number and found the end zone from seven yards out. In one final attempt to score before the half, Keidron Smith intercepted Jefferson in order to keep a 21-14 Ole Miss lead going into the locker room.

At halftime, Corral was 8-for-11 with 134 yards through the air and 58 yards on the ground, accounting for all three Rebel touchdowns. Arkansas had a 40-yard edge in total offense, but Ole Miss strung together a 21-point second quarter for the third time this season to lead at the break.

That momentum carried into the second half as the Rebels marched down field and came away with points for the fourth time in their last five drives. Caden Costa drilled a 50-yard field goal from the right hash to give Ole Miss a 24-14 lead just over three minutes into the third quarter. Costa became the first Rebel to connect from 50 yards since Andrew Ritter in 2013. However, Arkansas answered with nine plays downfield with Jefferson finding Trey Knox open in the end zone from three yards out. Just like that, the Ole Miss lead was cut down to 24-21, 7:30 left in the third quarter.

Ole Miss proceeded to gamble on fourth down for the fourth time and lost this time around on their own 34-yard line. The Rebel defense held Arkansas to a 31-yard field goal by Little, but the game was tied at 24 with 4:24 left in the third quarter. The Ole Miss run game used three plays to retake the lead. Parrish had two carries for a combined 28 yards before Snoop Conner broke loose for a 51-yard touchdown, untouched through the middle to give Ole Miss a 31-24 edge. Five plays later, Arkansas tied things up again thanks to two big catches by Treylon Burks and Jefferson’s second rushing TD from six yards out. The game was tied at 31 going into the final quarter.

Ole Miss punched back at the start of the fourth. After a fourth down conversion by Drummond, Conner again hit an open hole and raced 34 yards to the endzone, putting the Rebels up 38-31 just under two minutes into the final frame. The shootout continued, though, as Jefferson responded with a 46-yard pass to Warren Thompson to set up a 20-yard touchdown pass in the flat to Burks. The game was tied at 38 with 11:12 let to play.

Ole Miss wasn’t done scoring, though. Corral used a 59-yard throw to Braylon Sanders to set up Conner with a career-high third touchdown, making the score 45-38 with 9:01 left.

A sack by Campbell forced the Razorbacks into 3rd-and-long on the ensuing drive, where an overthrow forced a punting situation for just the second time. However, the Rebels failed to capitalize, giving Arkansas the ball on their own 35-yard line following a punt, leaving 3:59 left to play. The Razorbacks took advantage of the late opportunity, with Jefferson’s third rushing score from 10 yards out that tied the game.

The Rebels had the ball with 1:22 left to play, but all they needed were two plays to score the go-ahead touchdown. Corral found Sanders all alone on the right side and he scored from 68 yards out, giving Arkansas just over a minute to score. The Razorbacks drove down to the Ole Miss nine-yard line and with one second left, Jefferson connected with Thompson in the back of the end zone. On the two-point conversion, though, Williams and Robinson caused havoc in the backfield as Jefferson overthrew his receiver and the Rebels survived.

Ole Miss will travel to Knoxville next Saturday (October 16) to continue SEC play against Tennessee. Kickoff is set for 6:30 p.m. CT and can be seen on SEC Network or listened to on the Ole Miss Radio Network.

MCPP Report: Critical Race Theory “is being advanced in Mississippi.”