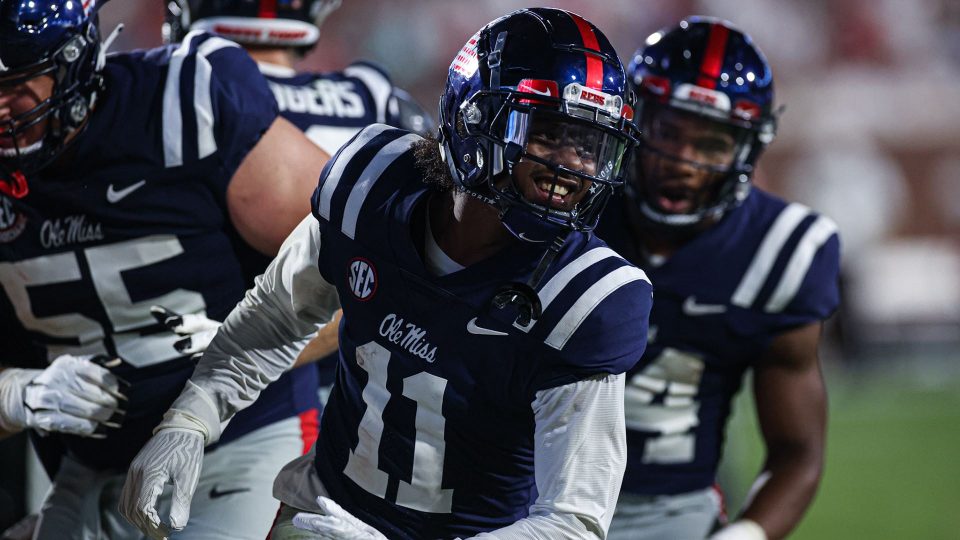 In Saturday’s Military Appreciation game, the No. 20 Ole Miss football team took care of business early and cruised to a 54-17 victory over Austin Peay at Vaught-Hemingway Stadium.

Matt Corral completed 21-of-33 passes for 281 yards and threw five touchdown passes. Dontario Drummond and Jonathan Mingo each caught a career-high two touchdowns each, with Drummond recording a third-straight 100-plus yard receiving game at 107 yards and two touchdowns – his seventh straight game with a score. Braylon Sanders and Snoop Conner each added a score through the air and ground, respectively.

Defensively, Ashanti Cistrunk led the Rebels with six tackles, while Sam Williams had two sacks and a 33-yard scoop-and-score in the first half. Across the board, numerous players made their Rebel debut at the end of a dominant home opener.

Austin Peay started things off with a 20-yard pass play from Draylen Ellis to D.J Render, but left the field three plays later, going three-and-out. For the second consecutive week, the Rebels scored on their opening possession. Matt Corral capped off a 10-play, 80-yard drive by rolling out and finding Dontario Drummond for the goal line score. The Rebels had an early 7-0 lead with 11:26 left in the opening quarter.

The Governors proceeded to use a fourth down conversion and pass interference penalty to get into Rebel territory, but Chance Campbell denied a second fourth down attempt on his team’s 36-yard line. The Ole Miss offense was not able to capitalize, but the defense picked up the slack and found the endzone instead. Sam Williams sacked Ellis coming off the edge, jarred the ball loose, and took it 33 yards the other way for six. With 4:59 left in the first quarter, Ole Miss led 14-0.

Going into the second quarter, the Governors took five minutes off the clock, ending a 14-play, 46-yard drive with another turnover on downs. Corral and company responded by going 66 yards down the field in two minutes, connecting with Jonathan Mingo for a 15-yard touchdown strike. Following the PAT, the Rebels had a 21-0 lead with 8:28 left in the first half. Shortly after, the Rebels added two more points after a punting gaff resulted in a safety.

Four plays after the ensuing kickoff, Drummond scored his second touchdown catch of the night on a 49-yard toss from Corral and some dazzling footwork along the left sideline. Just like that, Ole Miss had a commanding 30-0 lead with 4:51 remaining in the half. It wouldn’t take long for Sam Williams to get his second strip sack of the game, and it eventually resulted in Corral’s fourth touchdown pass to Braylon Sanders. The 11-yard score with 3:03 left in the half gave Ole Miss a 37-0 lead. Austin Peay finally broke through late in the half with Ellis finding Baniko Harley for a 30-yard touchdown pass, but Ole Miss held a 37-7 lead going into the locker room.

The Rebels began the second half just like the first, by finding the end zone. Corral threw his fifth touchdown pass of the game to Mingo from 40 yards, the fourth play of the drive. Mingo’s second score of the night gave Ole Miss a 44-7 lead just over a minute into the third quarter.

Ole Miss did it all over again after surrendering a field goal. Snoop Conner capped off an eight play, 56-yard drive with a three-yard touchdown plunge. Conner’s third TD of the season gave Ole Miss a 51-10 lead with 7:13 left in the third quarter. With 6:14 left in the game, Caden Costa connected on a 26-yard field goal to remain perfect on the year. The Governors added a late score by CJ Evans Jr., but the Rebels had things well in their hands, advancing to 2-0 on the year at the final score of 54-17.

The Rebels will remain at Vaught-Hemingway Stadium next Saturday, September 18 when they host Tulane. Kickoff is set for 7 p.m. CT and can be seen on ESPN2 or listened to on the Ole Miss Radio Network.