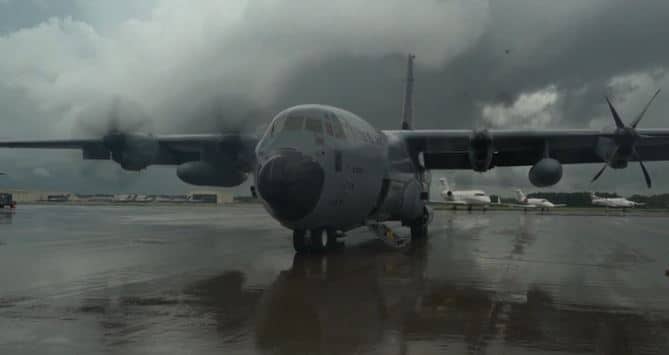 South Mississippi is in for a soaking this weekend, anywhere from 4-8 inches of rainfall is expected along the coast through Sunday morning.  The Hurricane Hunters play an integral role in getting accurate forecasts each Hurricane Season.  “The more we fly–it’s kind of like the law of averages–the tighter these forecasts are going to get and the better they’re going to get,” Lt. Colonel Sean Cross told SuperTalk Mississippi during an interview on The Gallo Show this morning.    “We keep continuously extracting information from inside these storms and all that stuff goes into these databases and that’s how they build these forecast models.”

With all the technology available, you may wonder why meteorologists don’t just use satellites.  “Satellites are great, but they’re a long way from the surface of the ocean.  They still do not have that technology to extract the lowest center of pressure from a storm.  The only way to do that…still…is to put a manned aircraft in the eye of a hurricane,” Cross explained.

And to think, it all started with a bar bet in 1943 in Bryant, Texas.  There was a pilot named Joe Duckworth:  “He was standing there in the hangar and they said hey, we know there’s a hurricane out there in the Gulf of Mexico, we bet you can’t take that T6 Texan and go fly into it.”  He took the bet and a navigator named Ralph O’Hare and they successfully flew into the hurricane.  When they came back, there was a weather officer who wanted to go up and see what it was like on the inside.  They went back up again successfully, he took some readings, brought back visual observations that he made from inside the storm, and that’s how tropical reconnaissance flights were born.

Ochsner, Rush merge with goal of expanding access to healthcare in Mississippi