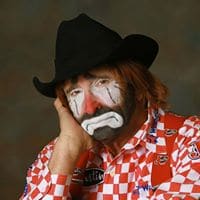 According to the Pro Rodeo Hall of Fame, Harris was born on November 6th, 1936 in Lake Cormorant, Mississippi.  He got his start as a bull rider and then a fill-in bullfighter while still in high school and developed into one of the sport’s most respected funnymen over a career that has spanned more than half a century. Called the “Dean of Rodeo Clowns/Bullfighters,” he was PRCA Clown of the Year in 1992, 1994, 1995 and 1996.

At his peak, Harris performed at more than 100 rodeos each year, his timing, inventiveness and classic style the envy of his contemporaries. He became well known for his signature end to a performance, as The Original Bulldance, in which he would dance with a bull from the bucking stock.

Lecile’s style is influenced by the work of several comedians he grew up admiring, including Emmett Kelly, Red Skelton, W.C. Fields and Laurel and Hardy. The painted face he uses in his act has been part of his persona since 1955 when he was asked to serve as an emergency replacement at Sardis, Miss., and used shoe polish and lipstick from the local drug store to prepare.

The multi-talented Harris was a football player at the University of Tennessee-Martin, a session drummer in the Memphis are during the 1950s and early ‘60s and has done some performing on television and in films. He spent five years on the TV series Hee Haw and appeared in the films Walking Tall: The Final Chapter, The Last Days of Frank and Jesse James and W.W. and the Dixie Dance Kings.

On behalf of the State of Mississippi, we express our deepest condolences to and prayers for the Lecile Harris family. It was an honor and privilege to know and work with this gentleman, a true friend and a genuine Mississippi and rodeo legend.

Rep. Vince Mangold Joins the Conversation in the SuperTalk Studio