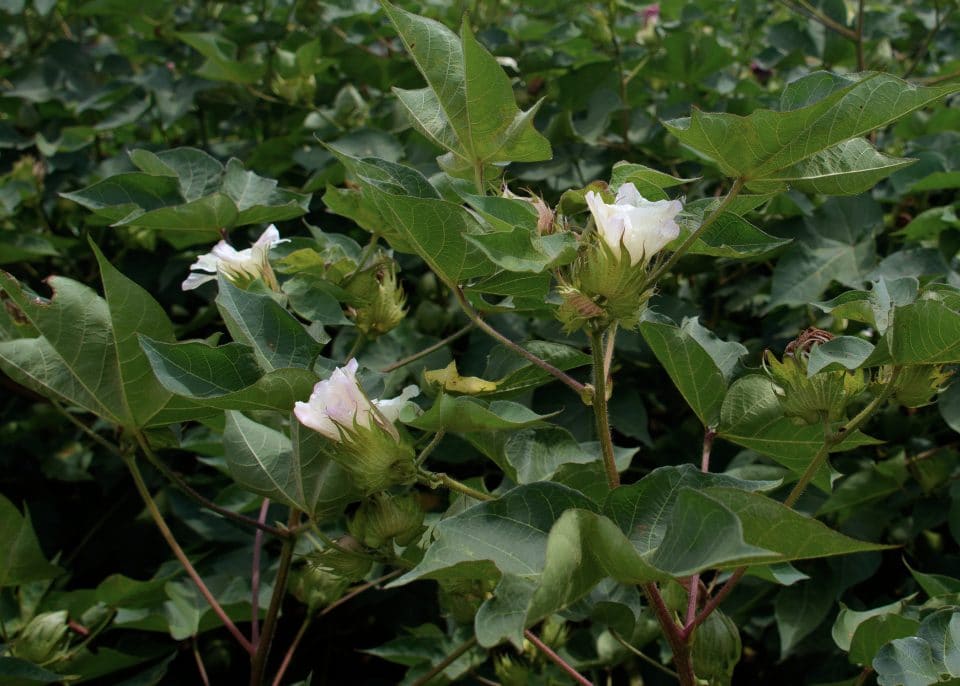 Bolls begin to open on this cotton plant in Coahoma County, Mississippi on Aug. 18, 2021. (Photo by MSU Extension Service/Kevin Hudson)

Image above: Bolls begin to open on this cotton plant in Coahoma County, Mississippi, on Aug. 18, 2021. (Photo by MSU Extension Service/Kevin Hudson)

When the calendar turns to September, many who call Mississippi home long for cooler temperatures to relieve the summer’s heat, but the state’s cotton growers want high temperatures and dry weather to drag into October.

“The state’s 475,000-acre crop is depending on high temperatures to hang around for another month to produce high yields. The crop is mostly a few weeks behind schedule because a wet, cool spring forced late plantings, and cloudy days slowed its growth in its first stage”, said Brian Pieralisi, cotton specialist with the Mississippi State University Extension Service.

Pieralisi said, “Major flooding from a week of heavy rainfall in June and from Hurricane Ida also had a say in the crop’s delayed progress. A hot, dry September would help the crop catch up.”

“The first few weeks of September are going to play a huge part in the quality of our harvest this year,” Pieralisi said. “I think the vast majority of our cotton will be picked in October, and a big rain when plants are setting bolls would cause us to run out of time before cooler weather comes.

“Likewise, the prospect of heavy rain or a cold snap at the wrong time would force growers to scramble and get what they can out of the ground or risk crop loss,” he said.

While the crop is behind its ideal maturity for this time of year, it’s ahead of where it was at this time in 2020.

The U.S. Department of Agriculture on Aug. 30 estimated 42% of the acreage already had bolls opening, compared to 22% a year before. The USDA also estimated 71% of the state’s crop to be in good or excellent condition. Twenty-four percent is considered fair, with just 5% in poor or very poor condition.

Pieralisi said the quality of the crop is highly variable depending on location.

“If you take out the extremes, you’re looking at a crop that is a little better than average, depending on how lucky you’ve been weather-wise,” said Pieralisi.

Extension row crop economist Will Maples said cotton prices have been on an upward trend all growing season long.

“December 2021 Intercontinental Exchange cotton futures nearly broke the 95-cent level a couple weeks ago before falling off to 93 cents, but Hurricane Ida concerns have pushed the price right back near the 95-cent level,” Maples said. “The market is continuing to question the size of this year’s crop as prices move higher.”

Some possible issues to keep an eye on that might temper demand are high prices, the ongoing pandemic and shipping delays.

“U.S. cotton is currently facing good demand that is expected to continue, with USDA projecting 15 million bales of exports in the 2021 marketing year,” Maples said. “USDA currently projects U.S. ending stocks at 3 million bales, which would be the lowest levels we have seen since 2016. The current 2021 marketing year average farm price projection of 80 cents is the highest since 2013.”