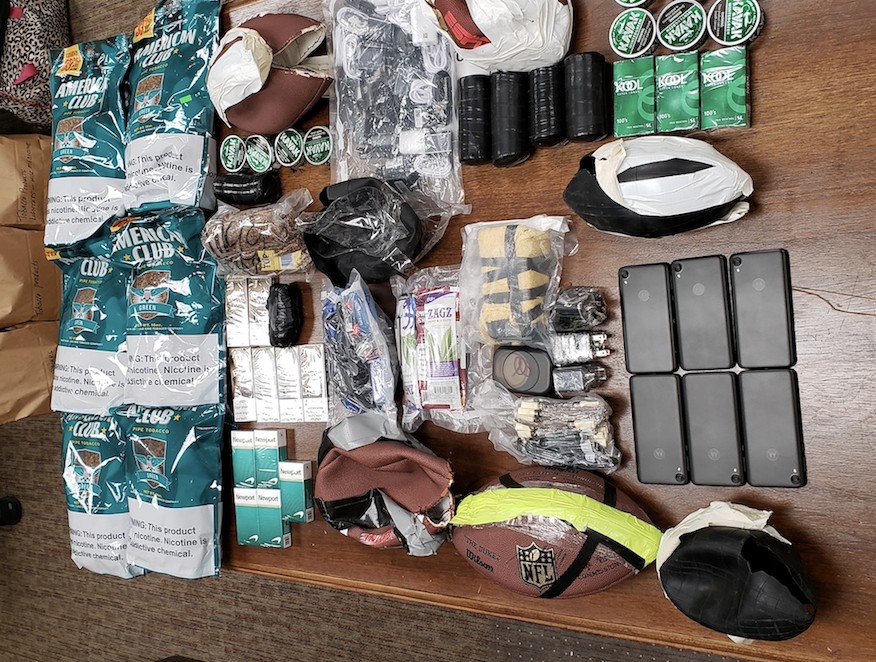 Multiple arrests have been made following a recent contraband bust at the South Mississippi Correctional Institution that involved chicken wings, weed and other items.

Corrections officials were able to recover 25 packages, some of which were made into footballs, that were thrown over the 18-foot fence at SMCI in the early morning hours of December 7th, but the suspects drove off before officials arrived. Now, 18-year-old Christopher Wilson, who is currently out on bond on a murder charge, has been arrested after his electronic ankle bracelet led authorities right to him.

The MDOC explained that it was the seven-pound bag of chicken wings that initially tripped the sensor, allowing authorities to secure the packages and catch a glimpse of the getaway car.

“We are continually improving new technology to protect our prisons, but the tragedy in this case is that now four more people are in jail and the inmates connected with the smugglers will lose eligibility for early release –all because they didn’t consider that drugs and seven pounds of chicken wings would trip a sensor,” MDOC Commissioner Burl Cain said.

According to the Department of Corrections, the bracelet, which alerts authorities if disabled, allowed law enforcement to track the smugglers from the prison near Leakesville back to Richland. Richland police officers were able to stop Wilson’s car, which he had stolen, and found another football in the car containing synthetic marijuana called “spice.”

Police also arrested 19-year-old Fredric James Roberson and 18-year-old Keshun Chambers. MDOC officials said the trio will be charged with drug possession, trafficking, and introducing illegal contraband into a prison. Further investigation also led to the arrest of Roberson’s 22-year-old sister Fredricka Roberson and 21-year-old Fredrikee Gooden on charges of introducing contraband into a prison.  They were jailed in Greene County.

Among the contraband seized, officials found: