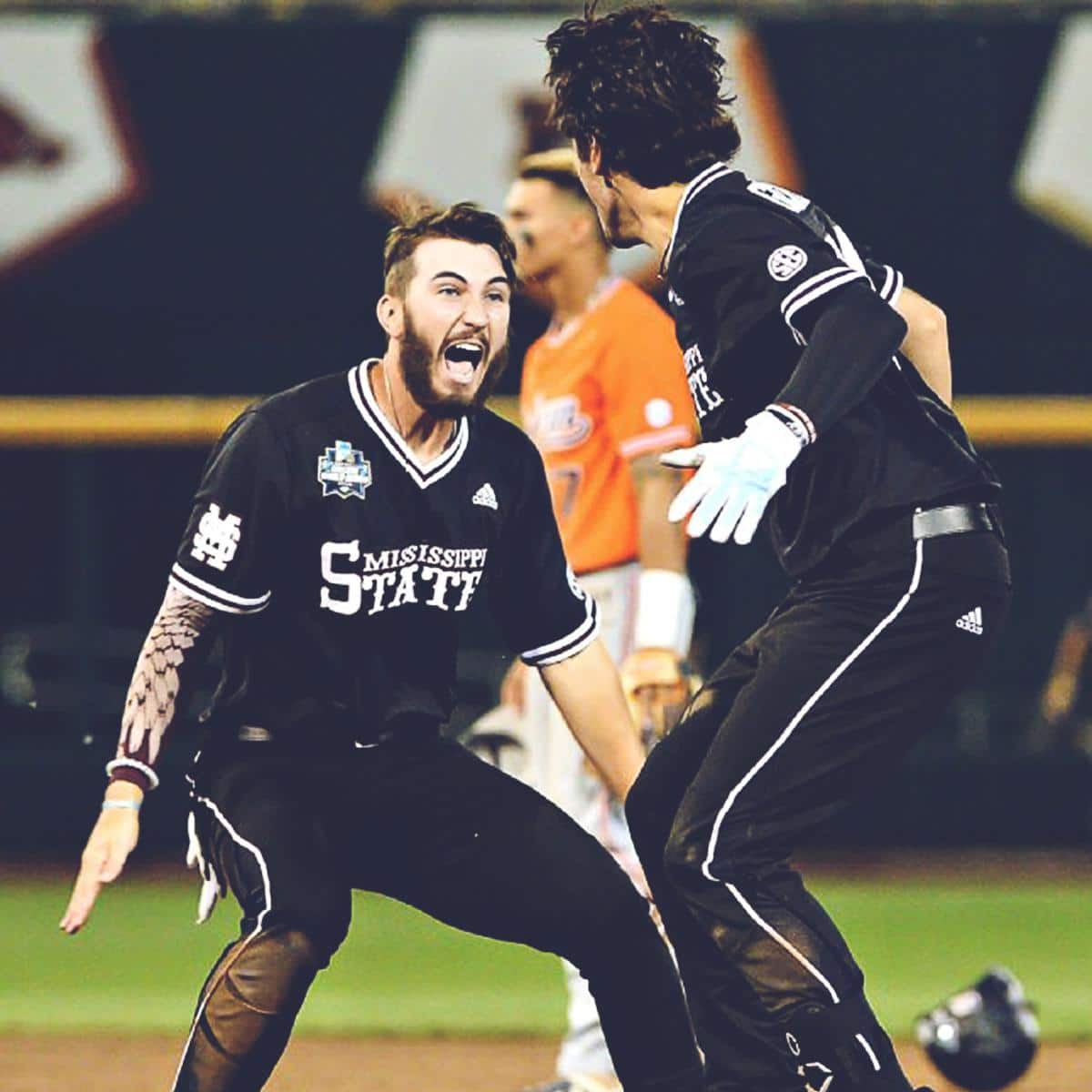 Omaha – Jake Mangum used one word to describe his team’s walk-off win over Auburn and the fact that Mississippi State has not lost a Sunday game this season in their all-black uniforms, “magic”.

State overcame a 4-1 deficit in the bottom of the ninth with a couple of crazy plays thrown in for good measure to walk out of TD Ameritrade Park with a 5-4 win over the Auburn Tigers. State had trailed since the second inning and looked to be headed towards the loser’s bracket for sure, but a series of hits that saw the batting order go from 1-9 put the Bulldogs into Tuesday’s winner’s bracket game against Vanderbilt.

THAT BALL HAD A FAMILY 😱

Ethan Small got off to a fast start, striking out the first five batters he faced, but a two-out infield single turned into a two-run blast by Auburn’s Edouard Julien, measured at a record-tying 429 feet for this stadium. From there, Small had to grind just to get to the fifth inning, as the strike zone tightened up and the Tigers were able to get some key two-out hits. For MSU, to be able to win a game where Small clearly wasn’t at his best is huge.

MANGUM STARTS IT UP

Mangum gets the Dawgs off to a great start in B9! #CWS | @HailStateBB pic.twitter.com/qEJKUG3zlG

With the top of the order leading off the bottom of the ninth, MSU had to at least feel good that it would live or die with its best hitters at the plate. As he has done so many times before, Mangum got things started with a leadoff double. After a Westburg strikeout and an Allen walk, Elijah MacNamee lived up to his nickname, roping a double into left to make it 4-2. After an RBI groundout by Justin Foscue, State looked like it would fall a bit short, until Dustin Skelton’s grounder led to a throwing error and an unearned run to tie the game. Rowdey Jordan was intentionally walked, then Josh Hatcher beat out an infield single to load the bases. With the winning run 90 feet away, Marshall Gilbert stroked the first pitch he saw off the second baseman’s glove into center to set off a wild celebration from the Bulldogs.

It’s an SEC showdown in Omaha.

It’s the matchup everybody knew was coming, as Mississippi State will look to take down the Vanderbilt Commodores on Tuesday at 6 PM. State’s only game against the Commodores came in Hoover, a 1-0 Vandy win. The Bulldogs still have not announced their Game 2 starter, but it will likely be either senior Peyton Plumlee or true freshman JT Ginn. For the Dores, another true freshman, Kumar Rocker, is likely to draw the start, he of the no-hit, 19 strikeout performance last weekend in the Super Regionals against Duke.