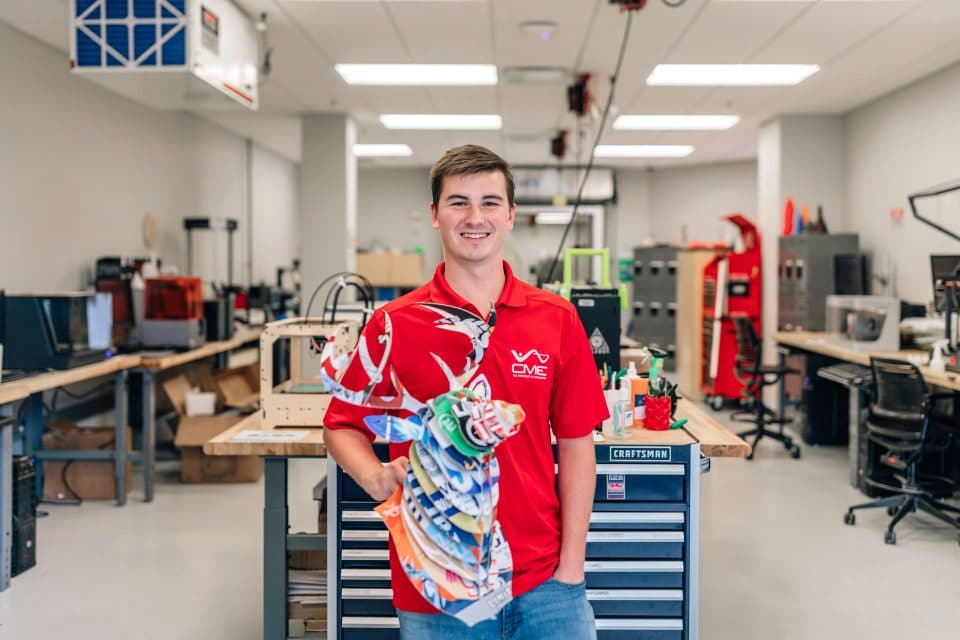 Knowing that alcohol-themed home decorations are big among college students and younger adults, the University of Mississippi senior from Charlotte, North Carolina, with a knack for DIY projects had already created a silhouette of his home state out of beer boxes.

But a cardboard animal head he viewed on Etsy inspired him, and the maker space inside the UM Haley Barbour Center for Manufacturing Excellence provided the space and tools to bring his idea to life. Less than two years later, Lubker is co-founder and co-owner of Beer Deer, a company that creates decorative, 3D wall art from heavy-duty cardboard.

Since its launch in October 2020, the company has sold more than 25,000 Beer Deers. Earlier this year, Beer Deer also created and sold a limited-edition Fourth of July-themed Red, White and Brew Beer Eagle. All 1,776 units sold. The company also has added a Booze Moose to its lineup.

“I started making the first Beer Deer a few days before spring break in 2020,” said Lubker, who is pursuing a business management degree with a concentration in manufacturing through the School of Business Administration and Center for Manufacturing Excellence, or CME.

“I didn’t quite finish it in time, so I was planning to finish it when I came back from spring break. COVID shut down normal life while I was gone, so I didn’t have an opportunity to get back into the CME maker space again for several months. I finally finished the project in August 2020.”

Once Lubker was finished creating that first Beer Deer in the CME’s Capt. Max R. Miller Maker Space, he made a short TikTok about the process.

He had already built a TikTok following with multiple videos of him making his 2004 silver Jeep Wrangler “unique and one-of-a-kind” through DIY modifications.

But nothing prepared him for the success of his first Beer Deer, created from random cardboard beer boxes sporting labels such as Twisted Tea, Miller Lite and Busch Light. Within five minutes of posting, more than 10,000 people had viewed the video, and the comments were rolling in.

“This would be a sick present for my dad.”

“here’s a blank check write whatever amount on it and I will pay it.”

“Initially, I did not expect the video to do well,” Lubker said. “My ‘style’ of video was a step-by-step, voiced-over tutorial explaining how I completed each project, and because the Beer Deer was made before I was ever active on TikTok, all I had was random scraps of videos that I edited together into a 6-second TikTok with music.

“The momentum continued building, and the video ended up with over 2 million views, with thousands of people commenting asking to buy one and noting their love for the idea. At that point, I knew I had an opportunity on my hands.”

To help figure out the logistics of mass-producing Beer Deers and shipping them nationwide, Chris Wood joined Lubker as co-founder and co-owner of Beer Deer.

“Chris is a skilled and experienced guy in the e-commerce industry, and he reached out to me through direct message on Instagram, presented a portfolio of what he has done in e-commerce previously and told me that the comment section of my video was all the validation he needed to know that this product would be a slam dunk,” Lubker said.

“He got a website and logo set up within a day, and we put a last-minute viral launch strategy in motion and the sales started rolling in.”

“I knew we had to move fast before the hype died down, so I never had time to establish a business plan. I just knew we had to hit the ground running. At that point, I didn’t know how it was going to work, but I knew I would figure it out and make it happen.”

Watching the TikTok video, Wood knew he wanted a Beer Deer for himself, so reaching out to Lubker to start a business was a simple decision.

“After seeing thousands of other people saying exactly what I was thinking, that was enough for me to decide it was worth it,” Wood said. “Simply put, I don’t pursue or sell anything that I’m not passionate about or wouldn’t buy myself.”

Since its beginning, the buzz around Beer Deer has only continued humming. That first Beer Deer was a labor-intensive DIY project that Lubker created from dozens of cardboard beer boxes that he and his friends collected. He cut out the side panels, glued them back-to-back and set up digital design files so the CME maker space laser cutter could do its work.

And while the initial target audience was males in their early 20s and men in their 40s and 50s – as they were the largest group of early purchasers – Beer Deer’s evolution from CME maker space to the national stage also included savvier marketing through TikTok and Instagram.

“We very quickly learned that the way to reach that group most efficiently is to advertise to women in their 40s and 50s, as they typically have relationships with both target demographics, with one being their husband and the other their son,” Lubker said. “The largest segment of sales are coming from women buying Beer Deer products as a gift for their son or husband.”

The marketing also includes new products such as the limited-edition Red, White and Brew Beer Eagle and the new Booze Moose, along with merchandise such as T-shirts that align with the brand. More offerings will be joining the existing lineup later in the coming months.

“Each milestone has been monumental along the trip,” Lubker said. “Now that we’re a year into it, I have become accustomed to it, and it doesn’t seem like quite as crazy of a thing anymore. I just know that part of my responsibilities in life are with this business.

“I reflect almost daily on everything I have learned and developed through my experience thus far with Beer Deer, and it motivates me to want to continue to grow Beer Deer and learn even more from the experience.”

With the success of Beer Deer, it’s easy to forget that Lubker is still a student, balancing a course load, the hours spent on Beer Deer and a social life as he prepares for his May 2022 graduation.

Keeping on track means planning every day meticulously, including keeping a running schedule of every single day so he is organized and accomplishing tasks, Lubker said. Although some less important tasks or activities get bumped off the agenda, he still spends most days constantly occupied.

A plus is that he keeps a tight sleep schedule. Also, being productive makes him happy and fulfilled, so his lifestyle is perfect for him, he said.

He also has the support of family, friends and UM staff and professors.

Although his parents were both apprehensive at first with Beer Deer, Lubker said they have always been supportive.

“Now that it took off and has become a successful and legitimate business, I would imagine they couldn’t be unhappy about it if they wanted to,” he said. “They are both thrilled and proud of me and what the business has become in one short year.”

That support also is on the Ole Miss campus, as professors have assisted Lubker, and some are even customers.

“All of my professors in the CME have been very supportive, always asking about my progress and wondering how they can help,” he said. “Outside of the CME, I avoid talking about it for the most part, so the majority of my teachers don’t know about Beer Deer.

“The few who have found out, outside of the CME, have also been very supportive, and I’ve had some great conversations and received some great advice from the teachers I’ve discussed it with.”

Established in 2008, CME, housed in a 47,000 square-foot LEED-certified facility, is the only program of its kind in the nation that is developing the next generation of leaders, innovators and entrepreneurs in modern manufacturing.

The unique undergraduate program uses an interdisciplinary learning environment that allows students to gain knowledge of modern manufacturing practices through an experiential educational approach. Whether taking courses at the CME or in the factory of one of the center’s many industry partners, CME educates students to graduate with a deeper understanding of the manufacturing sector and also to be prepared to act as leaders for the advancement of the profession.

“For the faculty and staff of the CME, it is very rewarding to see students like Ryan have so much success in bringing their ideas to life in such a unique way,” said Scott Kilpatrick, CME’s interim executive director and instructional assistant professor at the center. “We have always thought of the CME as a key piece of the entrepreneurial ecosystem on the university campus.

“Undoubtedly, CME students are the greatest part of our program. They typically have very creative and innovative viewpoints and problem-solving skills. Our maker space was established to provide a venue to encourage unstructured, collaborative learning for students within the CME.”

Although Lubker had no idea his university career would lead to Beer Deer, he knew he would find support for his creativity in a spot such as the CME.

“I have always had an interest in making things, fixing things and being creative,” he said. “That passion is actually what piqued my interest in engineering, leading me to come to Ole Miss.

“When I was in high school, I had a family friend who went to Ole Miss, and he was in the Center for Manufacturing Excellence. He knew of my interests in business and engineering and told me that it would be worthwhile to check out the CME, so I did a little research, came down for a tour and knew that I wanted to come to school in Mississippi.

“I was indecisive about majoring in business or engineering when I was looking for schools, and the CME offered the opportunity to combine those interests into one program. It was the perfect fit for me.”

Beer Deer’s runaway success is only part of Lubker’s UM story. Since stepping on campus as a freshman, Lubker said he’s enjoyed every bit of his journey.

“I am someone who couldn’t find a negative thing to say about Ole Miss if I tried,” he said. “As a senior, it is absolutely devastating to think about the fact that I’ll be graduating and leaving Oxford in a few short months, but I’m doing my best to maximize the rest of the time I have left here.”

As graduation approaches, Lubker also is looking at what’s next in his career arc besides Beer Deer. One interest is product management in the consumer goods industry, seeing how a product travels from idea conceptualization to the consumer.

“Eventually I want to go into business for myself full time, starting and owning several businesses, but for now, I definitely want to go out and get some real experience in the workforce once I graduate,” he said.

Stage one of that real-world experience is already in motion, and it launched from the CME with a Beer Deer.