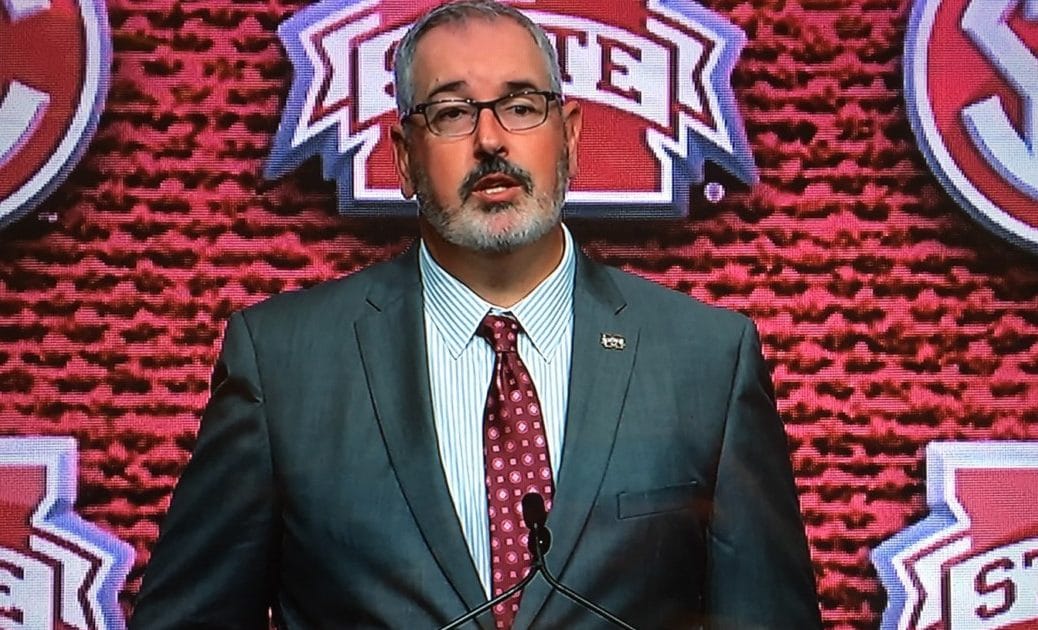 Joe Moorhead is out at Mississippi State after two seasons.

The news was first reported by Brett McMurphy and confirmed by SportsTalk Mississippi’s Brian Hadad.

Sources have confirmed to me that @Brett_McMurphy‘s report is indeed correct, Joe Moorhead is no longer the head coach at Mississippi State.

Moorhead’s job status seemed to be in question for a majority of the 2019 season, and while he seemed safe after the regular-season finale, a fight between LB Willie Gay and QB Garrett Shrader during bowl game prep that sidelined the true freshman with an injury weighed heavily in the university’s decision to move on from Moorhead.

Once the game kicked off, Mississippi State jumped out to a 14-0 lead, but lacked any punch as Louisville seized control of the game with 31 unanswered points.

Moorhead ends his tenure at Mississippi State with a 14-12 overall record and an 0-2 record in bowl games.

In a statement, AD John Cohen said that the university decided to move in a different direction.

“In consultation with President Mark Keenum and after a thorough review and evaluation of all aspects of our football program, I have decided that a change in leadership is in the best interest of our team and university,” Cohen said. “I want to thank Coach Moorhead for the hard work he has done with our football program. I wish Joe and his family success in the future.”

In his first season, the Bulldogs finished 8-5 as they boasted one of the nation’s best defenses, but it was Moorhead’s offense that held the team back. In 2019, a revolving door at the QB position and suspensions stemming from NCAA sanctions were a few of the main factors in the team’s 6-7 finish.

Moorhead broke his silence earlier today on Twitter, and thanked Mississippi State and its fans following is time in Starkville.

Ever since Moorhead arrived after a brief stint as the OC at Penn State, many fans questioned his fit in Starkville, and McMurphy’s report quotes a source as saying that “he wasn’t a great fit” for the program.

As far as names to keep an eye on as the coaching search begins, Hadad has named a few.

“The candidate receiving the most buzz at this time is University of Louisiana head coach Billy Napier. Louisiana announced on Thursday they had agreed to a two-year extension with Napier, but the contract had not been signed. It is believed Napier wants to coach his team in the bowl game, the Ragin’ Cajuns take on Miami of Ohio in the LendingTree Bowl on Monday, January 6. Other names of interest would be Austin Peay head coach and former Bulldog assistant Mark Hudspeth and Florida defensive coordinator Todd Grantham, also a former Mississippi State assistant,” he wrote.

While it may be later in the process, Mississippi State now becomes the 4th job to come open in the SEC. Ole Miss has hired Lane Kiffin, Arkansas hired Sam Pittman and Missouri landed Eli Drinkwitz.

RSV virus can be fatal if not treated properly