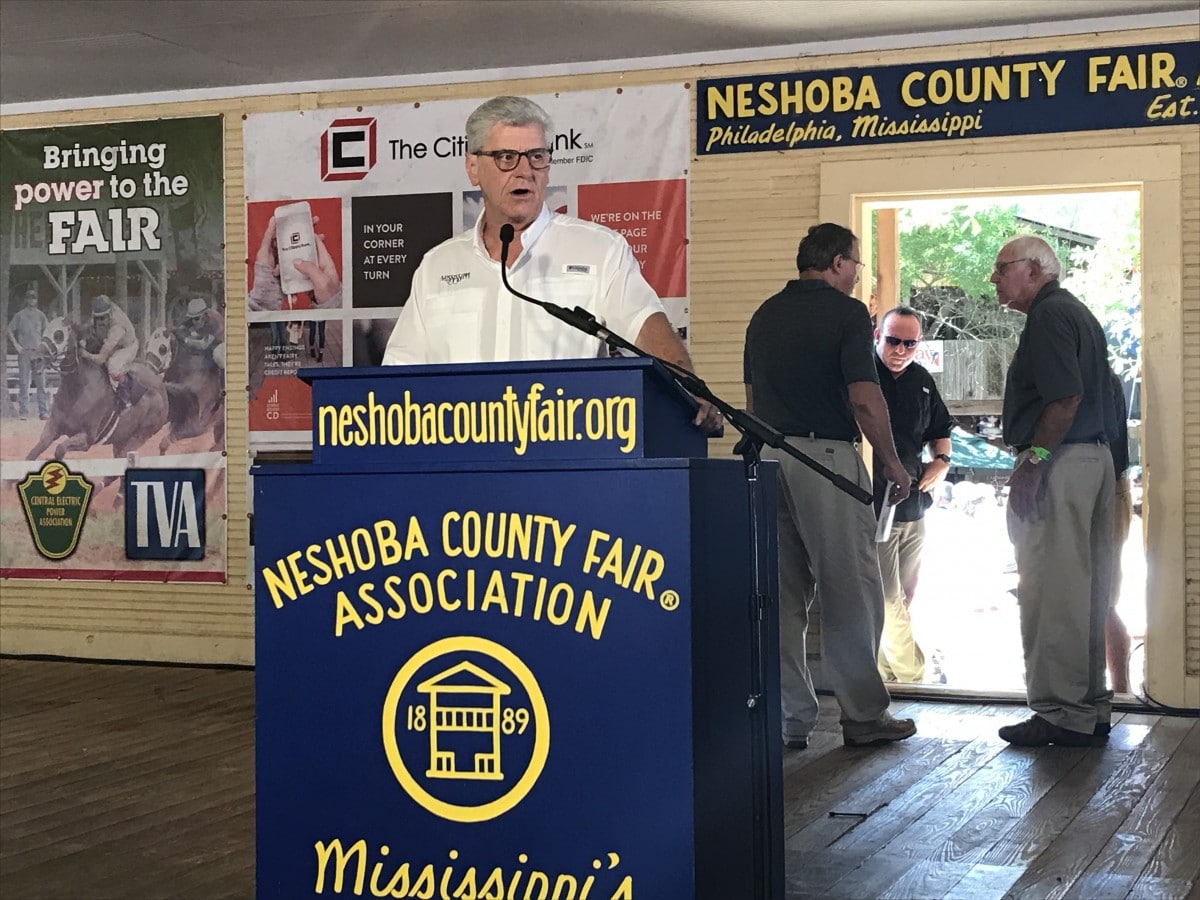 Politicians from around the state gathered in Neshoba this week for the time-honored tradition of standing behind the historic blue podium and speaking before the packed pavilion. This year brings elections for every office from local Sheriffs to state Representatives, Senators, and statewide elected officials such as Attorney General and Governor.

Phil Bryant is term-limited to eight years and took the stage at the Neshoba County Fair to share with the crowd his accomplishments during his time as Governor. While this was Bryant’s final time speaking at Neshoba as Governor, he may have the chance to come back and speak again in the future as several Governors have done so before him. However, Bryant says he won’t be out on the campaign trail any time soon.

“I’m not running for office now, or ever again,” said Bryant.

Bryant spoke about childcare and education saying that today, 85% of high school students are graduating from high school, the highest number ever. He also touted the $1,500 teacher pay raise saying the raise will grow because the treasury is looking better than ever.

Moving on to unemployment, Bryant said the current 5% rate is historic and remembered when it was 9.4% when he first took office. He said there are 165K fewer people using SNAP today and went on to mention Continental Tire bringing new jobs to the state. He added that corporations are coming and choosing Mississippi “time and time again, every day.”

“I want every Mississippian to have a job… even if they don’t want one,” said Bryant. “I’ve got 43,000 job openings in the state after helping to create with the private sector, 85,000 jobs. That’s more jobs than any time in Mississippi’s history.”

Bryant added that the lottery will make the state money and said the gaming tax is already up 5.2% due to sports betting

“All this money is pouring in and we hadn’t even scratched off the first ticket of the state lottery yet,” said Bryant. “Wait ’til that money hits. We used to lose $40M a year to Louisiana and Arkansas. I got tired of that. We’re going to have a state lottery right here and we will keep that money. I hope we even get a few folks from Alabama coming over here to buy. We’ll sell them a lottery ticket. Cause all that money is going to build roads infrastructure.”

He said they have reformed some of the government and now have 4,700 fewer government employees than when he first became governor, which he says has saved the state $24Million.

Opioid overdose deaths are down 13% in one year due to 22% fewer opioids being prescribed by Physicians.

Bryant continued the speech talking about the tourism growth with 24.7M people came to visit the state last year which was the most ever in state history bringing in $6.51 billion dollars. He also mentioned the opening of the Mississippi Civil Rights Museum.

Boasted about the state’s approach to prison reform and putting non-violent offenders back to work. He added that the state’s prison population is down 11%, and mentioned his work with President Trump helping to draft the First Steps Act.

He continued talking about healthcare saying the state is seeing better outcomes but says they are providing access to quality healthcare. Bryant also mentioned that the number of teenage pregnancy has declined by 41% in the past eight years.

“I’m going to slide into home, I’m going to run through the tape,” said Bryant. “We’re going to finish strong in this administration. We’re going to pass the torch to a new generation of leadership. Stronger, more determined, better jobs, better education, better opportunities for all our citizens.”